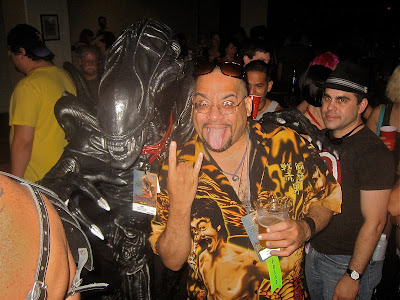 Ah, the Labor Day weekend. The unofficial end of the summer. A last seasonal hurrah for cookouts, beach parties and roving herds of scantily-clad females. It's also when the annual Dragon Con rolls around and turns downtown Atlanta into a fevered hallucination rendered into fleshy three-dimensionality. It's one of my favorite vacation destinations, celebrating as it does the might and majesty of geekery in many of its permutations, and I once more found myself there and on the loose, armed with a press pass and a strong need to be among my people, namely the great throng of concentrated American geeks. There are certainly many other venues in which to mingle with my brethren and sistren (yeah, I know that's not a word), but Dragon Con remains my very favorite of them all.

9/2-The day before the kickoff.

I awoke early and made my way to LaGuardia Airport to make the first of two connected flights that would get my beige ass to Atlanta — I would have gone for a one-stop direct, but I booked too late for that to have been an affordable option — and as I made my way to the terminal's food court for a quickie breakfast, I ran into friend and former DC colleague Scott Nybakken. 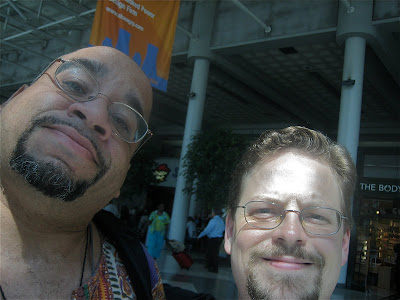 Yer Bunche and the excellence that is Nybakken.
I asked him if he was also on his way to Dragon Con, but instead he was headed to visit some friends in the Carolinas. I should have already figured he wasn't headed to the con because DC doesn't set up a presence there, but it would have been great to have him around as a companion and convention drinking buddy.

After two uneventful and packed U.S. Airways flights, I disembarked in Atlanta and opted to take the MARTA train system to the hotel, rather than get fleeced by the available shuttles and taxi pirates who charged an average staring fare of $16.50. Word to the wise when attending Dragon Con: always take MARTA because it's only a twenty-minute ride from the airport to Peachtree Center, which puts you off right smack in the middle of where all of the con's hotels are, and the fare is a mere $2.50 each way. To an everyday subway rider like me, it's completely painless.

Upon arrival at the Hyatt regency, it was already quite apparent that things were gearing up for Dragon Con and there was a palpable air of a powder keg of geekishness being primed for ignition. I took it as a good omen that the first thing I witnessed during check-in was a guy who'd brought his own homemade version of MYSTERY SCIENCE THEATER 3000's Tom Tervo, only with a different color scheme and equipped with weapon-arms. 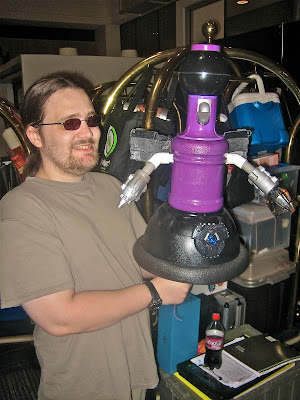 With Servo coming in second only to the robot from LOST IN SPACE in my estimation of fictional automatons/artificial intelligences, I was particularly tickled by this interpretation as it played into tiny and somewhat-fey Tom's own fantasies of being a powerful, conquering death-machine, a persona he once described as "Servotron: destroyer of worlds." 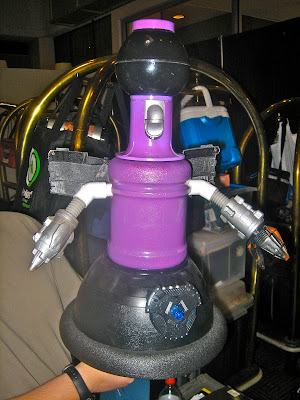 Both Josh Elvis Weinstein and Kevin Murphy — respectively the originator of the character and the replacement actor/puppeteer whose performance of Servo for nine years truly defined the little red 'bot — were listed as appearing at the con and I'd have loved to have seen their reaction to this excellent bit of DIY hero worship. 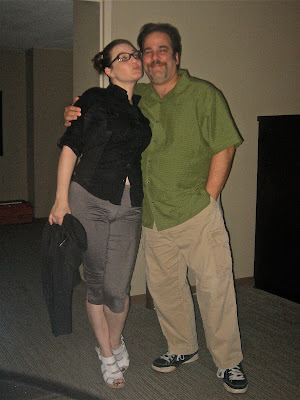 My dear old friends and hosts: Amanda and Jimmy.
This time around I was invited to share a VIP suite with con guests Amanda Conner and Jimmy Palmiotti, both of whom are old colleagues from my days in the comics biz trenches and very dear friends, especially Amanda, whom I grew up with and have watched flourish as one of the best cartoonists around over a three-decade-plus trajectory. We ended up with a lovely room located on the 21st floor and when one looked over the the floor's ledge, the vertigo-inducing effect brought to mind the seemingly endless depths of the Krell machine as seen in the sci-fi classic FORBIDDEN PLANET (1956). 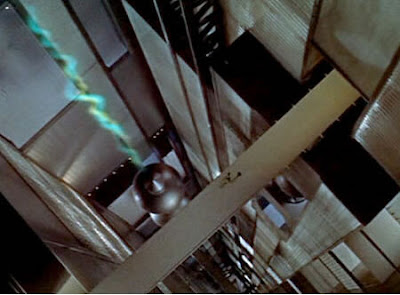 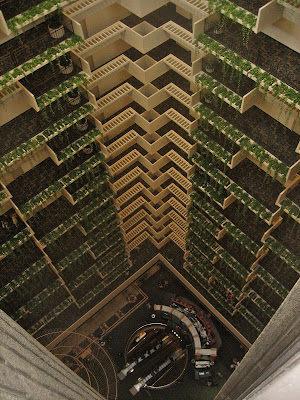 The view from the 21st floor of the Hyatt Regency.

Once within the confines of my portion of the suite, I set up my modest "media lab" and set off to pick up my press credentials from the con's media liaison room. 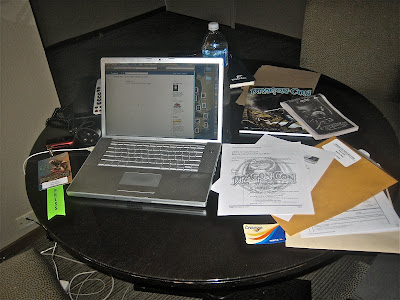 My bitchin' tabletop "media lab."
Once I clipped on my ribboned press badge, I set off to explore the surrounding area and chronicle the sights of the pre-con mishegoss. I encountered my first cosplayer of the show on the way out of the hotel, an enthusiastic Brit who rocked a female variant on the classic Batman costume (but significantly not a representation of either the classic or current Batwoman). 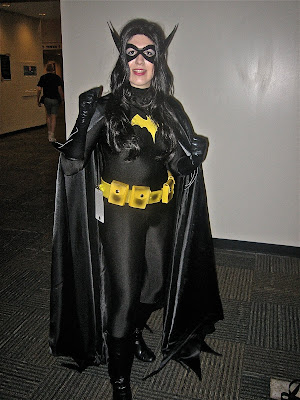 As my travels brought me outside into the considerable Atlanta heat and humidity, I noted the gigantic, completely unsubtle inflatable Jaegermeister bottle at poolside, a monolithic idol to potent alcoholic libations and a portent of the many "con babies" that were likely to be conceived over the next few days of copious drinking and sybaritic costumed fornication. 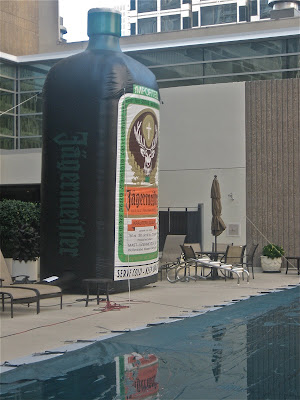 Advertizing or a fertility idol? You decide!
One of the unavoidable aspects of the show for attendees is the nightmare of picking up their tickets/badges via the pre-registration line, and it became a lengthy ordeal for many. 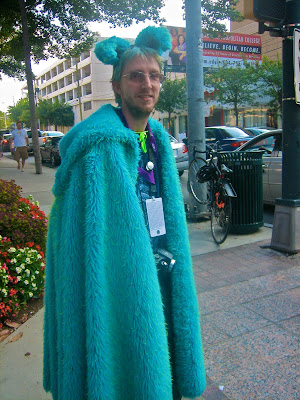 A con staffer acts as traffic control for the massive pre-registration line.
When I arrived to check out pre-registration and pick up the con's program and schedule book (which were not to be had at the media room due to them not having been delivered yet), I was staggered by the volume of the line which, according to one of the security guards at the entrance inside the hotel, numbered around 1200 people, and that was just those who'd made it inside the building. 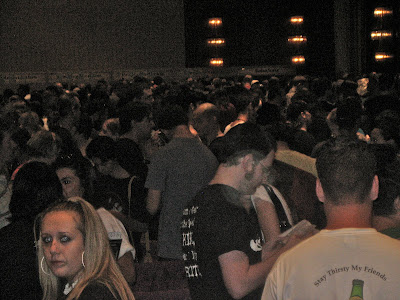 The pre-registration line, as seen from inside the building. 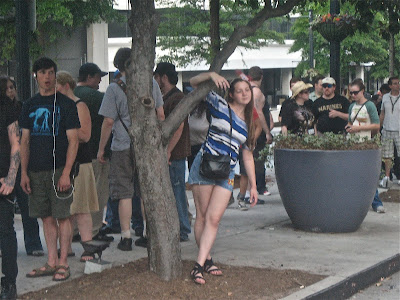 Just a small section of the line outside, a throng to rival the exodus scene in THE TEN COMMANDMENTS. 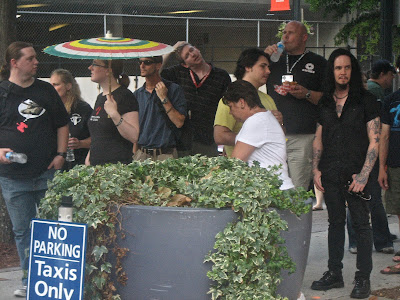 This line extended from the Marriott's lower level and literally wound around the building. One con-goer told me she waited on that line for five hours to pick up her badge. Yikes!

Another word of advice to those who may someday attend this con: always know where the nearest liquor store is. It is guaranteed to be cheaper than the bars found in the hotels and you can pick up cheap foam coolers with which to stock your room with your own mini-bar. 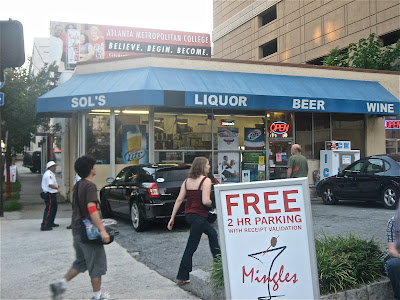 The excellence of Sol's, located a mere two blocks and one avenue away from the Hyatt Regency. It was there that I picked up a couple of six-packs and a cooler for under tweny bucks, while two beers and a shot of Quervo at the hotel's bar cost more than that.

Once back at the hotel and fully set up, I hit the revelry in earnest, leaving A.C. and Jimmy to attend the post-wedding barbecue of comics superstar Adam Hughes. As I waited for the elevator down to the lobby — the first of many very looooooong waits over the course of the weekend — I encountered a guy dressed as Charlie Brown in his infamous fucked-up ghost costume from IT'S THE GREAT PUMPKIN, CHARLIE BROWN. 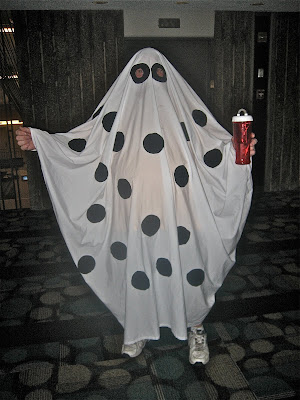 He was delighted when I recognized what he was supposed to be, stating that he thought his outfit was an obscure reference. I've got news for ya, bunky: if your outfit is culled from a special that has aired annually on national network television without fail for over four decades, it ain't obscure.

So then I hit the Hyatt's bar. 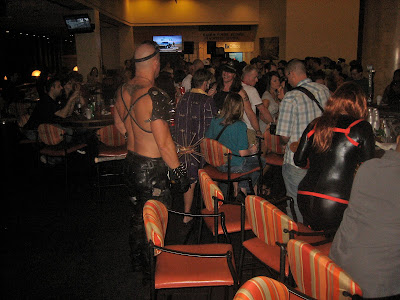 This hotel bar annually becomes the nexus for all of the local hotels' costumed revelers, and even the waitresses get into the act. In no time, the place becomes crawling with boozed-up geeks and partiers, the majority of whom are in great spirits and ready to share in the overwhelming sense of geek-love and solidarity. All manner of fannish interests were represented; movie, TV and video game characters, anime heroes and vixens, superheroes, robots, fantasy gaming mainstays, monsters, aliens, you name it, and it's a riot to get schnockered with these living representations of the pop culture imagination. 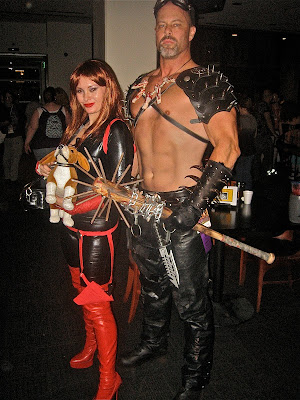 The first couples costume of the weekend. 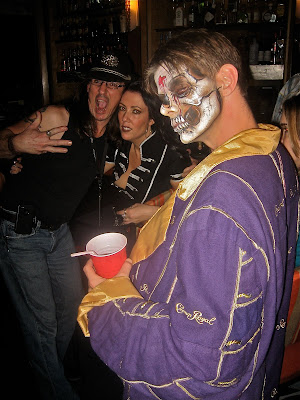 Undead and stylin' at the bar. 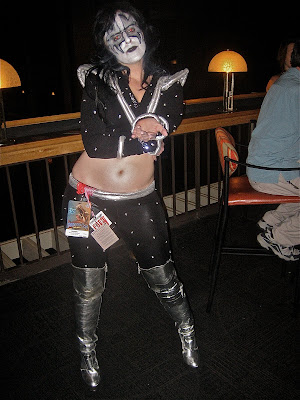 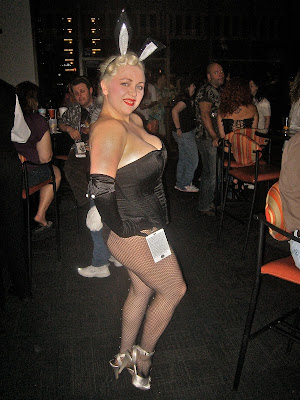 The first of the weekend's many bunnies, and by far the most charming. 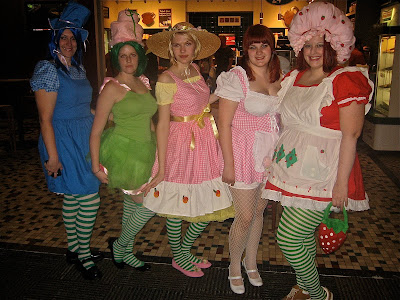 Strawberry Shortcake and her crew. 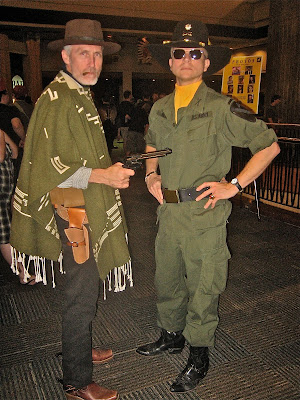 Unbridled testosterone: the Man with No Name meets Colonel Kilgore. 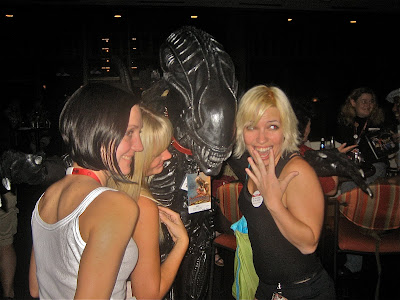 Who knew a xenomorph would be such a chick-magnet? 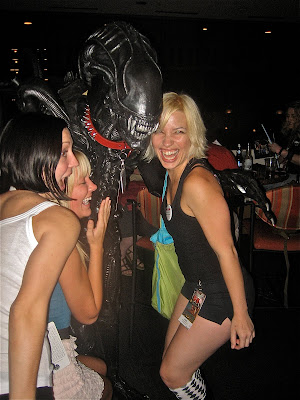 The blonde had a cute kinda/sorta European accent and when she giggled "oooh! It's so scary," I was suddenly fifteen again. 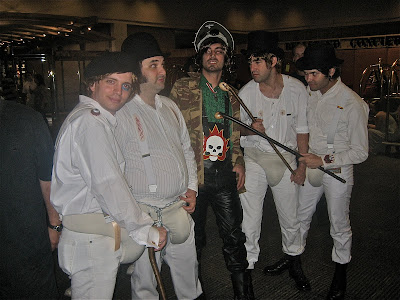 The Droogs from A CLOCKWORK ORANGE are a convention mainstay, but this may be a first: the Droogs and their tribal enemy, Billy Boy. 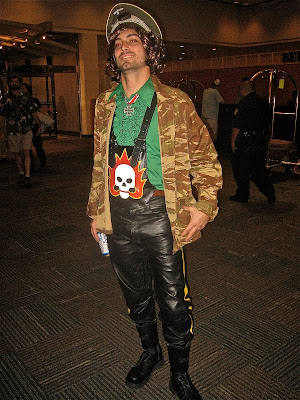 Billy Boy on his own. Well done, sir! 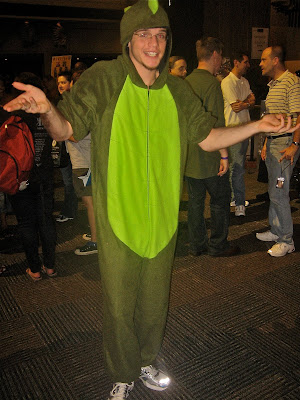 Actual quote: "I'm just a dinosaur! Why does everybody think I'm Reptar?" 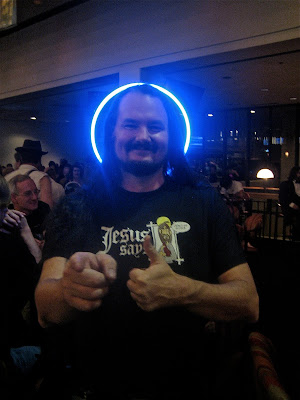 My favorite of the con's many Jesuses ("Jesii?"), gaining points for that kickass halo and for not being the Kevin Smithy "Buddy Christ." NOTE: I like Buddy Christ, but it's getting played out as a costume at cons.

I actually took things kind of easy on the first night, enjoying the costumes rather than getting completely faced (like I did last year). The one sad note of the evening was seeing a woman dressed as one of the Droogs from A CLOCKWORK ORANGE from behind and, when I asked if I could take her picture, discovering discovering she was crying her eyes out to a couple of her friends, over what I cannot say. She sweetly asked me to "give her a minute," despite her tears, but I opted to let her alone, hopefully to recover her moxie and enjoy the rest of the weekend.

With that, I retired to the suite, where Amanda had returned from the barbecue and was readying to get some sleep before what would be hours spent signing in Artists Alley the next day. Alas, both of our efforts at slumber were thwarted by the cacophony of all-night partying on all floors of the hotel making its way to the 21st floor in a fashion concentrated and focused by a trick of the hotel's acoustics. The din was unbearable, a melding of con-goers and that uniquely Southern breed of football fans who were there to celebrate the start of college football season, and by the time that things finally died down, the place was filled with all manner of screaming and the sounds of police cars, fire engines and ambulances arriving at the Hyatt and the neighboring hotels literally every five minutes or so. We eventually were able to glean some small amount of shuteye somewhere near 4AM, but this was only the night before the con proper got underway, so the true tumult had yet to begin...

TO BE CONTINUED
Posted by Bunche (pop culture ronin) at Wednesday, September 08, 2010

Chicks and Alien attraction - it's gotta be the tongue...