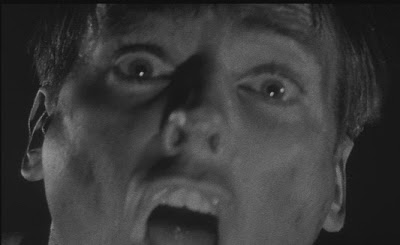 A long time ago, when I was somewhere around four, my mother began a program of indoctrinating me into the old sci-fi and horror movies that she loved. This was 1969, so I'm talking about THE CLASSICS of those genres, and I ate that stuff up like it was ambrosia. There were of course some so-so or even outright bad examples to be had (THE VULTURE and KILLERS FROM SPACE immediately come to mind), but the one genuine landmark from that early crash course that has stuck with me ever since is the original INVASION OF THE BODY SNATCHERS (1956). You see, at that early age I had already begun to suss out that I was kind of weird and that my individuality was something to be treasured, so that classic story of Californian doctor Miles Bennell taking what pretty much amounted to a one-man stand against a sinister and subtle takeover of his hometown by emotionless, body-duplicating seed pods from outer space really spoke to me (and not just because I lived in California in those years). INVASION OF THE BODY SNATCHERS taught me early that my individuality and identity were worth fighting to preserve, with death being the preferable option to placid, joyless oneness with a collective mentality.

Portraying Dr. Bennell was Kevin McCarthy, and thanks to that performance I never forgot his name or face and a small part of me thrilled whenever I saw him in subsequent film or television roles. In fact, so strong was the impression left on the general public by his performance in INVASION OF THE BODY SNATCHERS that he has forever been burned into our collective movie-watching memory as the tortured doctor who loses all of his friends, his community and the woman he loves to the silent takeover, eventually to be last seen famously stumbling among cars entering and exiting the town of Santa Mira while he screams what appears to be the cautionary rantings of an utter madman. Therein lay the strength of that story's punchline: we knew for a fact that Dr. Bennell was absolutely anything but crazy, but who in their right mind would have believed him? That ending was considered waaaaay too bleak by the studio heads at the time, so a new prologue and ending were created that showed Bennell recounting his story to an examiner at a clinic after being picked up by the police; following the meat of the story, the epilogue shows the examiner understandably not buying Bennell's account, but then word comes in of an overturned truck that was leaving Santa Mira...a truck loaded with seed pods of the type described by Bennell.

McCarthy's slowly escalating borderline madness is quite intense and impossible to overlook when citing the signature performances in the genre, and INVASION OF THE BODY SNATCHERS can often be found on "Top Ten" lists regarding the best in horror and science-fiction, with McCarthy being singled out for kudos (along with Don Siegel's taut direction). If you've never seen it, I strongly urge you to check out the original INVASION OF THE BODY SNATCHERS as soon as possible. I'm betting that you will also never be able to forget McCarthy's work in it once experienced.
Posted by Bunche (pop culture ronin) at Sunday, September 12, 2010