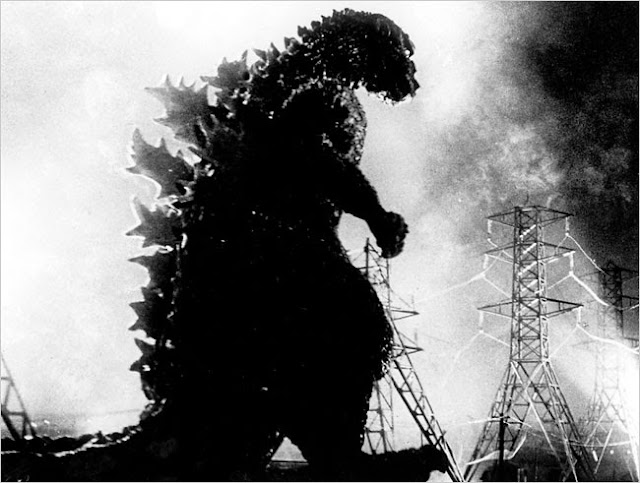 Yes, today marks the fifty-ninth anniversary of the release of the first Godzilla movie, a true cultural landmark for both Japan and the rest of the world. Until the relatively recent embracing of anime and manga by the Western mainstream, Godzilla was arguably the most well-known Japanese pop culture export and its very name has entered the common lexicon as a synonym for something large and imposing, especially when shortened to simply "zilla" and affixed to any other word. ("Bridezilla" being the prime example of late.) Godzilla's shadow certainly looms large over my own life, so in many ways I think of the fictional titan as a friend whose symbolic implacability lent me strength when I needed it. Sure, Godzilla would be defeated time and time again, but it always picked itself up and once more set about the business of monster-fighting and city-destroying with a renewed vigor and drunken cowboy swagger, and that was a powerful lesson for a kid who often felt out upon by the hostile world around him.

Happy birthday, Godzilla. Long may you reign as the undisputed king of the monsters, and may said reign never be benevolent. (Yeah, I know he's been a good guy on occasion, but those were forgivable lapses in scripting. It wasn't Godzilla's fault.)
Posted by Bunche (pop culture ronin) at Sunday, November 03, 2013