PLASTIC (NOT SO) FANTASTIC LOVER: The true and sad chronicle of one man's journey into artificial onanistic shame

WARNING: The following post is definitely NOT safe for viewing at work, in front of the kids, or by those who are offended by reality.

Let's keep it real and admit that we all occasionally have the urge to relieve stress by "having one off the wrist" or "relaxing in the gentleman's way," and in recent years the means for guys to facilitate the process of partner-less DNA-spewing have moved well past the usual options of one's hand, folded slabs of beef liver, and the ever-reliable gym sock (which, if left under one's bed unwashed for a length of time, becomes classified as a "bachelor's boomerang"). Women long ago realized the salacious benefits to be had with vibrators, once commonly sold as "massagers" and still coyly marketed as such under names like the "U Touch," the slogan for which is "If you can touch it, you can relieve it" (no one under the age of sixty will be fooled by its TV ads featuring a gaggle of women presenting a bride-to-be with gifts at her bridal shower), and even the common adjustable shower head on a hose has been re-purposed to reportedly spectacular effect when applied to the female genital array. Women's masturbatory explorations are widely accepted as a simple fact of life and even discussed in public forums, while the idea of men enjoying wank toys is still very much stigmatized and seen as rather aberrant, so for the most part men keep the existence of their self-pleasuring secret, despite everyone in the world knowing and understanding that we wring the weasel with abandon when moved to shuffle off some knuckle-children.

About two months ago, a former girlfriend with whom I'm still rather close sent me a belated birthday present in the form of a Classic Pink Lady Fleshlight and a sixteen-ounce bottle of water-based lube, accented with a note advising "Think of me when you enjoy this." I admit to being rather flummoxed by the gift, largely because when exposed to assorted odd items for the purpose of male pleasure, I have  been known to observe, "What the hell happened to just plain old jerking off?" but I decided to keep an open mind and eventually get around to giving the disembodied pussy a test drive. It took me a few days to get over the initial trepidation but when I finally took the Pink Lady out of its package and gave it close examination, I was more than a little bit intrigued. 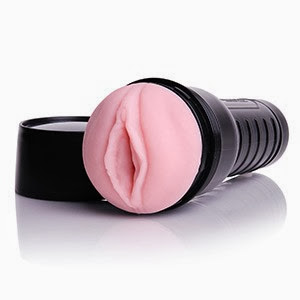 The catalog photo of the no-frills Classic Pink Lady Fleshlight.


Once freed from its packaging, the Fleshlight looks like nothing so much as a large, sturdily-designed coffee thermos, with a narrow end that looks like it could fit comfortably in a car's cup-holder. It features screw-off caps at either end, one to access the faux vagina and another that acts as a carburetor to allow variation in the vaginal canal's level of suction/physical accessibility. 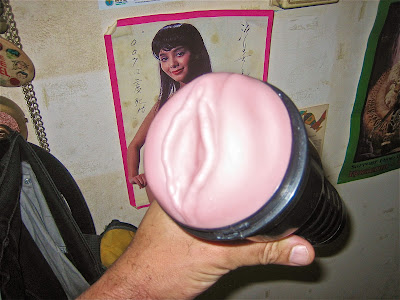 The fleshy portion is lent support by the exterior housing (aka "the vaginal Slurpee cup") and is easily removed for cleaning. When taken out of its housing, the flesh sheath is very rubbery/wiggly and very soft to the touch, but it in no way bears tactile resemblance to human flesh in general and the inner recesses of a lady's glorious secret haven of goodness in particular. 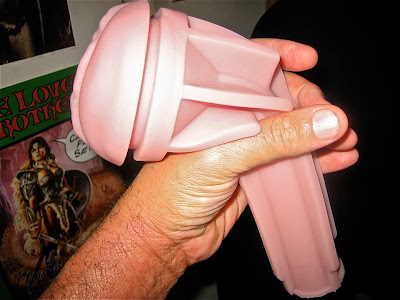 The inner flesh sheath, removed from its housing.

It's easily cleaned with mild soap and warm water, and when held in hand it reminded me of the de-shelled conch I handled a long time ago in Martinique. And when it comes to its ability to accommodate the range of sizes of the male member, the sheath's elasticity proves considerable enough to be able to slip over my hand and forearm with ease. 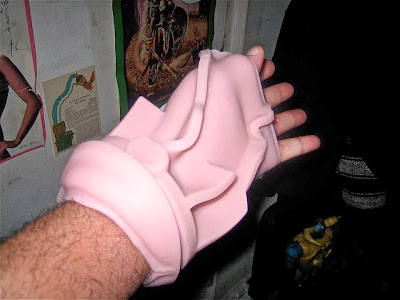 Vaginal flesh sheath, or a conversation-starting fashion accessory? YOU decide!

With the general examination out of the way, it was time to take the Pink Lady for a test drive, so I applied a generous helping of the lube to the sheath's lips and interior, manually stimulated myself to enough tumescence to plug myself into Pink Lady, and had at it.

First of all, the lube was cold, which is not a sensation that the average penis craves. Second, I'm a big fan of actual pussy. A very big fan. Therefore, please trust me when I tell you that the act of carnally connecting with the Pink Lady bears no resemblance whatsoever to the sensation of the irreplaceable real deal. The same can be said of no-frills manual masturbation, but in that case one is not expecting one's hand to yield anything resembling that cherished tactile experience. It's basically shuffle for a while and you're where you need to be. The Fleshlight, meanwhile, requires the lube prepping and a decent amount of fiddling about in order to render its grip comfortable — remember the adjustable carb — so I couldn't help but consider all of the preliminary steps in getting down to the action. But worst of all was the realization during the act that I was more or less fucking a thermos and must have looked quite ridiculous. When I finally crashed the yogurt truck, I felt a profound sense of disappointment (coupled with shame over the thermos epiphany).

After cleaning the Pink Lady and storing it away, I left it alone for two weeks before giving it a second go, this time armed with a clear understanding of exactly what I was getting when I once more plugged myself into it. Again my hand was far superior to the supposed state of the art in affordable equipment for pumping out population paste by one's lonesome, and I'm sad that my friendly ex wasted her money on something that from now on will take up real estate on my shelf with a glass eye stuck in its fleshy pink orifice as a weird piece of ribald/disturbing decoration. I swung by the local Toys in Babeland and priced the item and bottle of lube to see just how much that kind goddess spent on the gift (including the bottle of lube), and the final tally came to just shy of a hundred bucks. Allow me to be very clear on this: NOT WORTH IT. Since retiring my Pink Lady, I've read many online reviews from guys who claim to love the things, but several of them were at least honest enough to admit that they had nothing else to compare the sensation to, so their opinions should probably be discounted. There were a number of negative reviews that more or less matched my own opinion, so trust those.
Bottom line: While I appreciate my friendly ex's very sweet thought, I found the Fleshlight to be considerably less pleasurable than simply taking matters into my own hands, and since a Fleshlight is pretty much just a glorified coffee thermos when you get right down to it, it would also make for one hell of a drinks tumbler at parties. It would also make for a novelty opening to a bong if one stretched the flesh sheath over a bong's inhaler pipe, but it would get really nasty after smoke passed through its lips with regularity. Plus it would probably turn carcinogenic when coupled with the vapor. 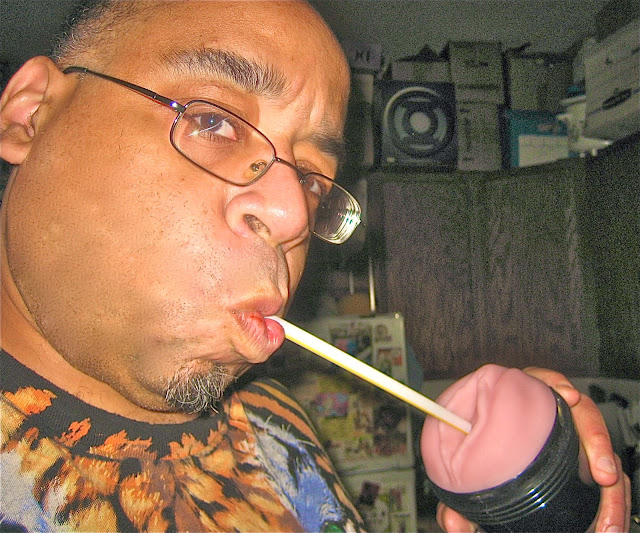 Don't puke. I assure you it was thoroughly cleaned long before this photo was taken. Plus, I'm just not that fond of the taste of semen. (Oh, don't be so shocked. What, you never passionately kissed your girlfriend after she gave you some oral kindness? Yeah, right...)
Posted by Bunche (pop culture ronin) at Tuesday, November 05, 2013