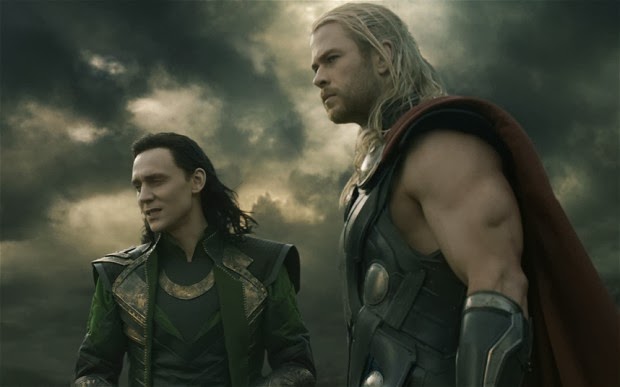 Roughly two years after the events of the first Thor film and an unspecified time after THE AVENGERS, the mighty Thor (Chris Hemsworth) returns to Earth after quelling assorted conflicts on several worlds in the nine realms of Norse myth, a job that has his father, Odin (Anthony Hopkins), sizing him up as next in line for the throne of Asgard, the home of the gods. Once on Earth, Thor finds that his love interest, Jane Foster (Natalie Portman), is inadvertently the host to the Aether, a major-league power source coveted by the dark elf Malekith (Christpher Eccleston), who seeks not only to exact vengeance for Asgard's long ago victory over and near-destruction of his race, but also to destroy all nine realms of existence when they perfectly align for the first time in ages. Needless to say, Thor has to save Jane from the force that has taken up residence in her body and kick Malekith's elven ass once and for all while preventing the complete and utter destruction of everything, but the odds are very much stacked against him and the success of his plan depends on the participation of his imprisoned evil/amoral step-brother and god of mischief, Loki (Tom Hiddleston). Will Thor save Jane and the universe, aand will Loki betray his brother or find redemption?

THOR: THE DARK world is a more entertaining followup to the the first Thor flick, largely because the origin minutia and setup is out of the way, and this time around what we get is a pretty-to-look-at spectacle, replete with romance, action, and humor. In short, if you're looking for an exciting piece of light entertainment that pretty much subscribes to the modern formula of a popcorn-muncher, you'll probably dig it. I certainly enjoyed it, but I have to clarify that I enjoyed it as a brain-optional romp where the plot and character development take a backseat to the action and the visual wonders wrought by CGI. And what there is of a plot contains a number of surprises that I won't spoil, but here's the short list of elements worth considering:
Bottom line: THOR: THE DARK WORLD is a serviceable entry in the Marvel movie tapestry, but it's more of a snack than  meal. I had fun with it but I won't be running out to see it again anytime soon. And a close friend in England saw it when it opened in the U.K. and immediately wrote me to rant about how he felt it was the worst Marvel movie ever, I love the guy like a brother but we are frequently at odds when it comes to our opinions on movies, so I called bullshit on  his opinion by writing back to ask if it could possibly be worse than DAREDEVIL or either of those appalling Fantastic Four movies. He unequivocally answered "no," so make of that what you will. (NOTE: Since first posting this review, my friend in England wrote in to clarify that he meant he felt the movie was the worst film thus far fro Marvel Studios. DAREDEVIL and the abominations that are the two Fantastic Four flicks were not made by Marvel Studios. Just so we're clear on that point.)
Posted by Bunche (pop culture ronin) at Friday, November 08, 2013

I have changed my opinion of the guy who plays Thor. I did not realize he is 6'4" or so (possibly 6'5"). He is the right guy for the role. I have yet to get used to the Loki character though. In fact, I remain unimpressed with the Avengers concept on film. It was cornball fun in comic form but the whole save the world/universe concept has worn thin by this point in all media (not just comics to film).

I have yet to see the new Thor but am told it is just good fun. I guess that is the whole point, to lower expectations for the film adaptations.

In spite of it's flaws, I enjoyed Thor 2 nearly as much as the first Iron Man, and in some ways more than Avengers. For me, it captured the feeling of a Jack Kirby cosmic story better than any movie yet - you could almost feel the Kirby crackle in the otherwise silly contrivance, "the ether". For this, I forgave the thin explanation of the villains, or the loopy cosmic apocalypse finale - I just munched my popcorn and saw Kirby panels coming to life on screen.

Part of what I always liked about Thor was that to me, he was Marvel's superior answer to Superman (who I hated in comics as kid - since in the early 70s, he was at the height of his planet-juggling, time-travelling omnipotence), and Thor 2 does a fantastic job of capturing that Superman-ness, which I mean as a compliment. As you say, you can practically feel the blows of Mjölnir, and the wind from Thor's cape as he leaps to the horizon.