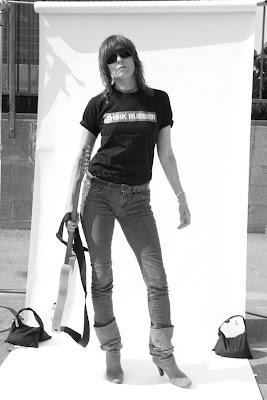 "I was never too interested in high school. I mean, I never went to a dance, I never went out on a date, I never went steady. It became pretty awful for me. Except, of course, I could go see bands, and that was the kick."-Chrissie Hynde

Today is the sixtieth birthday of the one and only Chrissie Hynde, and looking back on my more than three decades of thinking she's the coolest thing ever doesn't trip my usual "I feel old" triggers one little bit. When it comes to badass rockers who embody the powerful triple-threat of talented composer, player and singer, Hynde stands tall among the all-time greats of either gender and definitely holds the Number One position among the women. She's been a major hero to me since I was of a very impressionable age (fourteen to be specific) and my estimation of her awesomeness has only grown over the years. 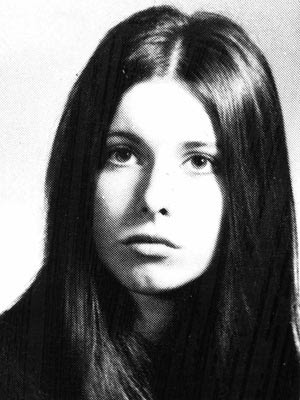 Hynde's senior yearbook photo from Akron's Firestone High School, 1969.
Hailing from Akron, Ohio — also the home of Devo — Hynde made her way to London in 1973 and by the mid-'70's found herself in at Ground Zero for the British punk movement, namely the famous boutique SEX, run by designer Vivienne Westwood and Malcolm McClaren, the rock 'n' roll Svengali who would unleash the Sex Pistols upon the world. Though one of the key components of punk's anti-allure was its DIY sensibility — which basically meant that if you could pick up a guitar and wring noise from it, you were a punk musician — Hynde possessed a keen intelligence and genuine talent that made her something of an ill-fit among the musicians and bands that were her contemporaries. While the Brits mostly cranked out godless rackafracka steeped in accents straight out of a bad Dickens adaptation, Hynde allied herself with genuinely talented musicians in the forms of bassist Pete Farndon, keyboardist/guitarist James Honeyman-Scott, and drummer Martin Chambers, to form the original iteration of the Pretenders in 1978. 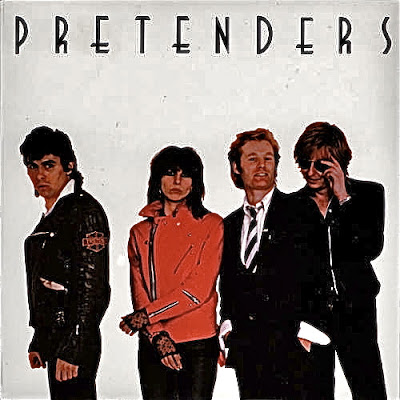 The Pretenders' first album: It came from out of nowhere to kick my fourteen-year-old ass and completely re-arrange my way of thinking about what pop music could be.

The eponymous first effort of the Pretenders was an instant classic and not at all what one would necessarily think could spring from the same musical genre that gave the world the likes of Splodgenessabounds or The Pork Dukes. Its musicianship was across-the-board striking, the compositions were an intriguing confluence of the beautiful ("Kid") and the hard-edged ("Precious," "Tattooed Love Boys") and stuff that fell somewhere in-between ("Brass in Pocket") and with Hynde serving front and center as the true face and voice of the group, it displayed a distinctly female sensibility of a type previously unseen in rock. (True, Fanny and Heart were there first, but both were stylistically light years removed from what Hynde and crew were up to.) That greatly appealed to me as an adolescent who dug girls but found much of the music crafted by female pop artists to be way too saccharine and, well, "girly" (with certain tunes by Heart being the major exception).

The group's second album, simply entitled "Pretenders II," was a decent sophomore effort that yielded a couple of true gems, specifically the evocative "Talk of the Town" and the superlative "Message of Love," a song whose presence should be mandatory at wedding receptions, but it somehow fell rather short of the debut record's unexpected knockout punch. But then came "Learning to Crawl," arguably the band's best after the initial salvo and a work that reflected a stylistic maturity and greater confidence in the wake of critical and financial success. 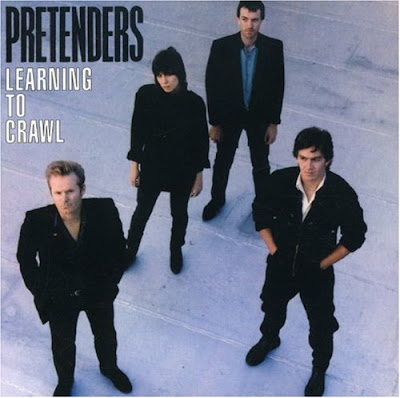 "Learning to Crawl": the best third album since The Damned's "Machine Gun Etiquette."

Released two years after "Pretenders II," a delay due largely to the band's necessary restructuring following the drug-related death of James Honeyman-Scott and the dismissal of Pete Farndon (who subsequently O.D.'ed), the album was preceded by the 1982 hit single "Back on the Chain Gang" (which made it to #4 on the Billboard chart in 1983). At the time of its release, I found "Back on the Chain Gang" to be quite good, but what really made me eager for more was the single's B-side, the excellent "My City Was Gone," Hynde's stark and bluesy assessment of the degeneration of her home state. To hear her deeply sad-yet-reserved voice note how her former home was now a dead zone of shopping malls and muzak is to hear Hynde bear witness to a true "you can't go home again" end of an era and the direct confrontation of nostalgia for one's youth with the stark inevitability of "progress." It moved me at the time and has only resonated more deeply with each year. Another pre-album single, 1983's "2000 Miles," was also excellent (and has subsequently evolved into a wistufl and unlikely Christmas perennial), and along with "Back on the Chain Gang" and " My City Was Gone," it was wisely included when "Learning to Crawl" was finally released in January of 1984.

When it came out, "Learning to Crawl" proved to be a stunning achievement with not one weak track among the lot, with "Time the Avenger," the gorgeous "Show Me" and an excellent cover of the melancholy 1971 R&B hit by the Persuaders, "Thin Line Between Love and Hate," being standouts. I played that album to death when I first got it, and many of its tunes still enjoy frequent rotation from my iTunes library. Since those days nearly thirty years gone, I've followed both her band and Hynde's solo efforts with keen interest, but none of the post-"Learning to Crawl" output has quite moved me in the same way as the first three albums (although 1999's single "Human" is as good anything from the Pretenders' halcyon days). Nonetheless, my admiration of and respect for Chrissie Hynde remains unwavering, and I can't wait to see what she comes up with as her seventh decade commences.

Happy birthday, Chrissie. You mean a lot to me and your fans worldwide, so keep on keepin' it real. 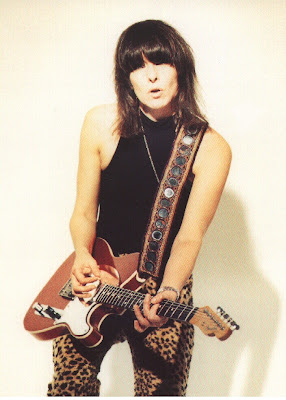 Chrissie Hynde: a million times cooler than your mom will ever be.
Posted by Bunche (pop culture ronin) at Wednesday, September 07, 2011

Steve, did you manage to ever give a listen to last year's 'Fidelity!' in JP, Chrissie and the Fairground Boys? While I can't say it's to the same level of 'meaningfulness' as, say 'Learning to Crawl' but some very interesting stuph, especially when taken in context of understanding the real-life relationship between JP and Chrisie before / during the writing process. Worth checking out if you haven't already.

That senior picture is the prettiest I've ever seen her look. It almost doesn't even look like Chrissie Hynde!