Often when I hang out with certain friends at a certain pub in Manhattan on Friday nights, I get several pints down my neck and I begin to stare at the blank placemats adorning our usual table. I will then whip out a pen — preferably a Sharpie but I've occasionally made do with a ballpoint, to much lesser effects — and begin filling the paper with whatever oddball scribblings flow from out of my Guinness-addled brain, and the end results often make little sense. Nonetheless, they are fun to draw and my friends enjoy them (a number of the finished hodgepodges have been claimed at the end of these nights and now reside on my friends' computer work spaces or refrigerators), so there you go.

I was out with the gang last night — which I really needed because the lack of a job plunged me into deep depression that I'm currently clawing my way back from — and, after sucking down approximately six pints (the reckoning is hard to keep track of because our waitress, Joanne, replaces empties before we even have a chance to request another) I got the urge to scribble. The first mat that I violated included a drawing of a "gimp," complete with pierced nipples, leather posing pouch, Cambridge Rapist-style bondage mask and scraggly body hair, and next to that was a caricature of the 2000 A.D. character Middenface MacNulty. Then, rounding things out is a quickie portrait of the cyclops from THE 7th VOYAGE OF SINBAD. Hey, why not? 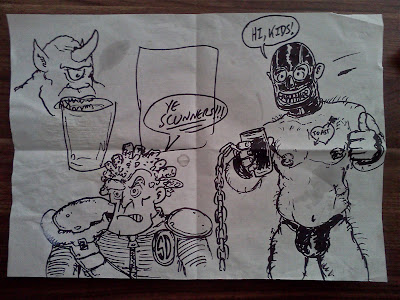 (photo by Rob Steen)
I didn't think to take a picture of that one when the mat was filled and by the time the thought occurred to me, my friend Rob had claimed it, folded it carefully, and stuck it in his wife's bag for safe keeping. However, when I awoke this morning and checked my emails, Rob had kindly sent me a picture of the item in question, so it is now permanently chronicled.

The second placemat, however, did get photographed as it happened and here it is in all its nonsensical glory. 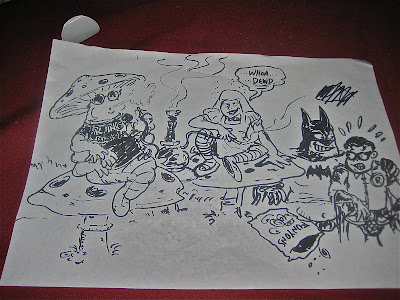 This one ended up claimed by one of three new acquaintances whom I met for the first time last night, and two of those acquaintances spent a good fifteen minutes or more closely analyzing my doodle and (believe it or not) wondering over how I could just pull something like it out of my ass (so to speak) while well-marinaded in Guinness. 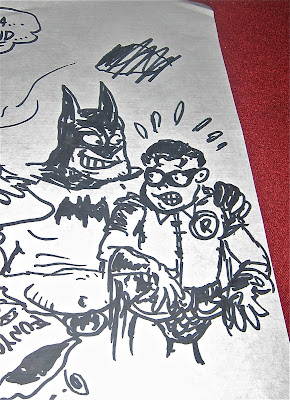 Detail from the second placemat.
So from now on, anytime I do one of these placemat mini-murals, I'll make sure to photograph them for posterity and happily post them here as blog fodder.
Posted by Bunche (pop culture ronin) at Saturday, September 17, 2011

I hope you're signing the things, too!

Really well done. Is it just my imagination or is that you on the left, disguised as the caterpillar?