Here's a look at some of the third wave of "the New 52," plus a handful of non-DC books: 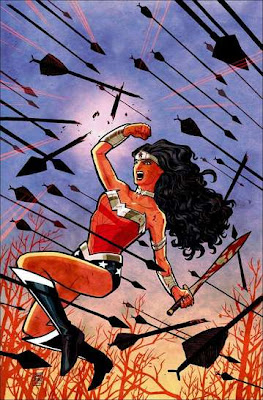 I just read the New 52's WONDER WOMAN #1 and recommend it mostly for Cliff Chiang's excellent artwork. As stated, it looked great, but the story was not at all what I expected. It's very much rooted in non-sanitized Greek mythology and consequently it's waaaay more gory and violent than I was prepared for (which is not to say that I minded at all). Diana's drawn to be very Amazonian — depending on the panel, I'd peg her at being well over six feet tall — and handles her mythological foes like an ancient warrior should, meaning that she has zero qualms about making her combat against them both personally painful and fatal. True, we saw her quite necessarily kill Maxwell Lord a few years ago and it was clearly implied on a number of occasions that she has killed creatures and beings outside of the laws and realms of mortals, but here we see her hack off the right arm of a female centaur, with the severed limb and wound right in the reader's face. The sequence where the evil centaurs are created (there's a male and a female) is also gorier than DC's usual kid-friendly fare, complete with the beheading of a stable horse and one of the centaurs clawing its way free from the dead horse's gaping, gory neck wound. The story itself feels like the reader came in on the middle of something and little explanation is given as to what's going on, which leads me to once again state that this, like several others in the relaunch, should have been a 48-pager. And, perhaps honoring an ages-old comics tradition, the scene on the cover is nowhere to be found inside the book (no surprise there). And I don't care what anyone says, I miss the red hooker boots. 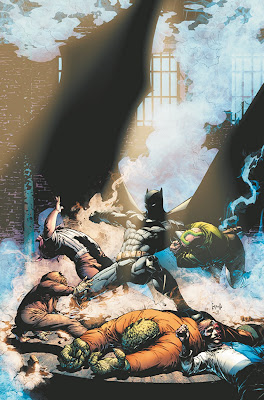 The new BATMAN #1 is vastly superior to the recent DETECTIVE COMICS relaunch, and as such I recommend it. The story it sets up intrigues me and I'm curious to read further and see where it goes. (I won't spoil what happens.) My one complaint is that the art is a tad too anime-influenced to be appropriate for a Batman book (in my humble opinion), which leads to Bruce Wayne being drawn to look like he's maybe twenty-five.

RED HOOD AND THE OUTLAWS #1 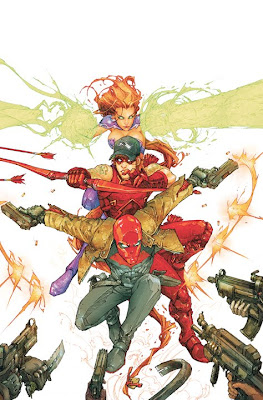 This entertainingly bad entry would have rated as almost passable in my book if not for writer Scott Lobdell's appalling handling of Starfire, a character that I and a legion of comics readers, both male and female, have grown to adore over the past three decades. There are those who can make a not-unjustified case for Starfire being the DCU's answer to Little Annie Fanny, but she was always written as a sweet-natured, physically/sexually uninhibited ingenue (an intriguing contradiction in terms), but now she's an apparently brain-dead living sex toy to be shared by any nearby males, meaning her teammates. There are also a few elements in the plot that make no sense whatsoever, which again leads me to say this would have benefited from being a 48-pager. The book does little with its 20 pages other than to introduce us to the unlikeable "New 52" versions of the Red Hood, Arsenal, and Starfire, and it also fails to establish much by way of an actual story, so I'm hoping that will be remedied in the next issue. Yes, I will be back for the next issue, because this is bad enough to warrant one more issue to see how much worse it all gets. 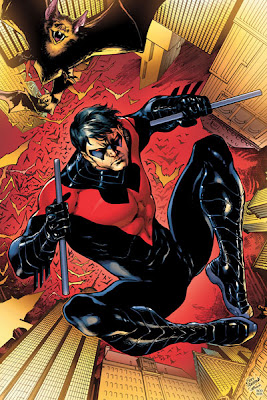 The main reason to check out NIGHTWING #1 is the stunning artwork by Eddy Barrows and J.P. Mayer. Simply put, it's easily one of the best drawn books in the relaunch thus far. That said, the story makes it clear that this is one of the books apparently unaffected by the status quo re-setting at the end of FLASHPOINT, thanks to Dick commenting on having worn the mantle of the Batman "while Bruce was away" for a year. The story itself is mostly an issue-length monologue by Dick on his current state of mind and being, and that part's not bad. The rest of it features a highly-skilled professional assassin who's shown up in Gotham to exact a hit on Dick, but the issue ends before the "why" of it all is given. Say it with me: again we get what feels like half of an issue and again I say it should have been a 48-pager. Also, there art here is so good that I very much doubt it can be maintained on a monthly basis. In fact, I predict a total of three, maybe four issues before the art chores get passed off to Joe Schlabotnik. 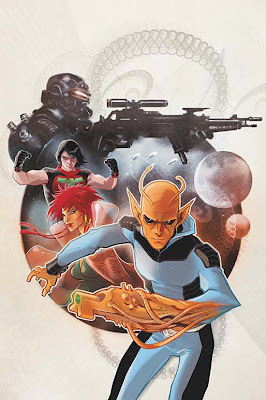 Much like last week's LEGION LOST, this umpteenth first issue of LEGION OF SUPER-HEROES is just more of the same, albeit with decent art. There's nothing more to add, other than that I won't be back next month. 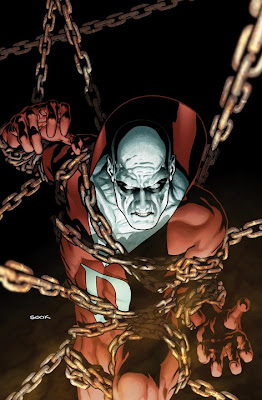 Featuring a modernized origin for the venerable Deadman, this is a decent read, but it's also a derivative metaphysical-redemption-based (rather than science-fictional) knockoff of QUANTUM LEAP. But whatever, the art and story mesh into an interesting whole and I will stick with it for now. 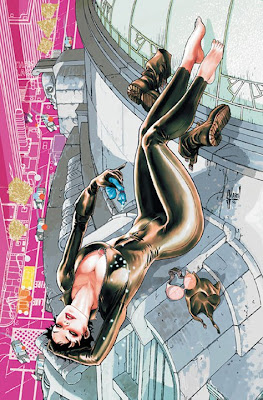 Catwoman is a character I've loved since childhood and I will always give a new book starring her a chance. This latest CATWOMAN #1 entertained me, but it has already garnered a good deal of controversy among fans for its considerable and unrepentant sleaziness. It's our girl Selina once again up to exactly the kind of shenanigans we've come to expect of her in her post-BATMAN: YEAR ONE iteration, only with the pinup factor turned up to eleven, although the art can get anatomically wonky at times. (It reminded me of someone trying to channel the IRON-JAW-era Pablo Marcos.) Worth a second look. But caveat for parents and those who may be expecting a PG-level issue: it should be noted that the guest appearance by Batman toward the end of the issue sends this into territory that could make for some uncomfortable questions from your kids. In short, Catwoman and the Batman fuck in costume on a rooftop as a way to alleviate tension, and the final splash page has already become rather infamous. It's a post-coital shot of Batman, looking utterly spent, as an equally exhausted Catwoman remains astride him, leading anyone who understands how such activities work to conclude that we are getting an onscreen depiction of our heroine still very much with a bat-dick inside her. This also did not read like a situation in which any form of prophylactics were in use, so there a good message for you...(Then again, Batman has already fathered a bastard son, so maybe he's just really into bare-backing? God knows he can afford to throw the mother of any kid who may get conceived a cornucopia of cash.) 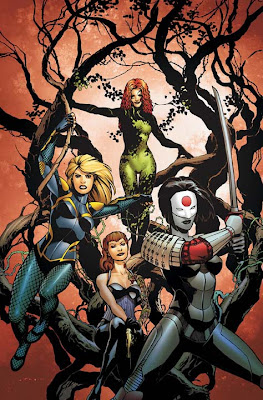 BIRDS OF PREY is back for yet another relaunch — this being its second in less than two years — only this time minus the writing of Gail Simone, which really shows. Jesus Saiz's artwork is quite nice but I'm only giving this one, maybe two more issues to see if it goes anywhere. (And ignore the cover; Poison Ivy and Katana are not in this issue.) I am, however, intrigued by Starling, the woman seated cross-legged in the middle of the composition. She's featured throughout and at first I thought she might be a revamp of the Huntress, but nothing is given of her backstory. 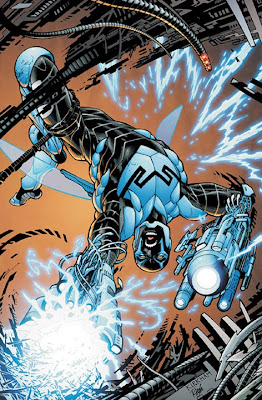 Despite my complete lack of interest in this character, I checked out BLUE BEETLE #1 and was pleasantly surprised by what I got. In another series opener that should have been a 48-pager, the protagonist doesn't become the Blue Beetle until the very last page, at which point we get a blurb reading "Next: Meet the Beetle." Um, wouldn't one expect to meet the Beetle in the first issue of his own book? It's clear that the writing on most of the books in the relaunch are being geared for collecting the arcs in trade paperbacks and that's especially evident here, and I think that's a shabby way to treat newcomer monthly readers, the stated target audience of the whole thing in the first place. And is it just me or has the version of the Beetle we've seen over the past few years pretty much a knockoff of the Guyver?

THE SIMPSONS' TREEHOUSE OF HORROR ANNUAL #17 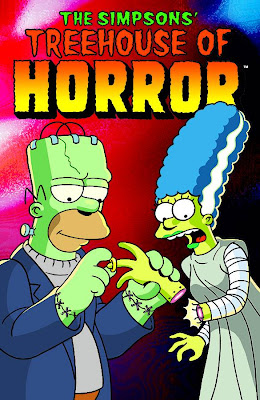 A not-bad assemblage of Simpsons-related cheesy Halloween stories, one of which was scripted by Jane Weidlin, formerly best known as the rhythm guitarist of the '80's band the Go-Go's. It's all fun but worth the price of admission is Jim Woodring's laugh-out-loud hilarious "harvest of Fear," in which Bart buys an old E.C. knockoff comic at a yard sale and finds himself deeply disturbed by its contents, as well as becoming embroiled in an attempt to solve the greatest mystery in the history of '50's horror comics. For that story alone, this is HIGHLY RECOMMENDED. Seriously, I laughed my ass off reading that one. 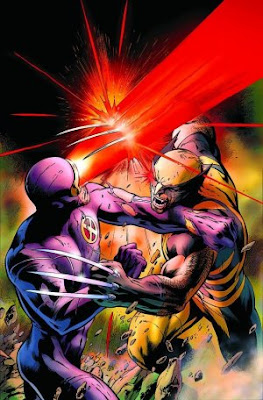 At times it seems like at least half of the comics that come out each month feature the X-Men, so how in does anyone keep track of what's going on? I certainly can't, so I gave up on regularly reading them ages ago, but then I saw this issue on the stands and picked it up for the Alan Davis artwork, which was as gorgeous as always. I didn't even bother to read most of the story, simply skimming it instead, because I'll just pick it up when the collected edition inevitably comes out. The only thing I can tell you about the plot is that Wolverine and Cyclops begin the knockdown, drag-out fight that's been brewing between them for ages, and the outcome of that will apparently cause the legion of mutant characters to split into two factions, each led by one of the respective combatants. Whatever. The art's pretty, though. 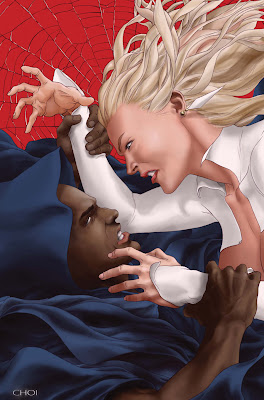 I can't talk about this one without giving away the particulars but if you're a Cloak and Dagger fan, you'll get a kick out of this. 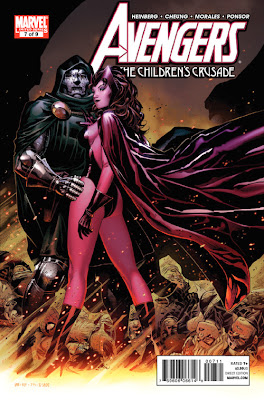 I'm not gonna lie. I bought this to see what the status quo is with the Scarlet Witch, now that she's apparently sane again — a long and convoluted story that has been ongoing for the past few years throughout a number of titles and mini-series, so don't ask — and I found both the story and art to be very good. Much better than expected for yet another Marvel mini-series, I will definitely check this out in full when it hits as a collected edition.
Posted by Bunche (pop culture ronin) at Sunday, September 25, 2011