It's that time again, dear Vaulties, so let's get straight to what I picked up from this week's batch of DC's "New 52." 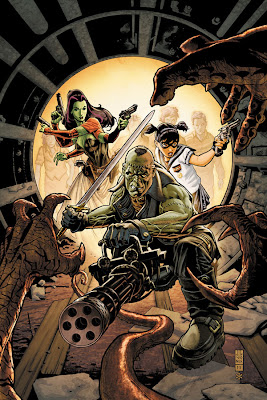 For all of us secret agent fans and former "monster kids," this one doesn't skimp on the clandestine organization particulars or the monsters (there are many), and even throws in a non-Atom Ray Palmer as the organization's answer to James Bond's Q. Very entertaining, I will definitely be back for more of this. But, fun read though it is, FRANKENSTEIN: AGENT OF S.H.A.D.E. is a blatant gene-splicing/knockoff of AGENT OF S.H.I.E.L.D. and HELLBOY, complete with constructs that could be L.M.D.'s down the line, and an operative among the Creature Commandos who's a female version/doppelganger of Abe Sapien. 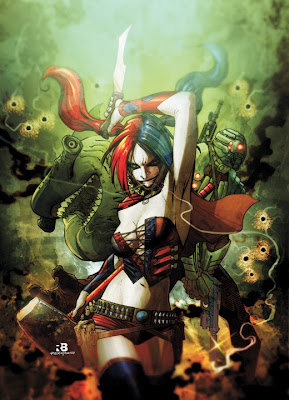 This one comes as a pleasant and nasty surprise that fuses the regular SQUAD concept with that of the late, lamented SECRET SIX (to an extent). We get Deadshot, a re-designed Harley Quinn — who looks great as seen in the interior art by Federico Dallocchio, as opposed to the awful pseudo-anime-looking mess seen on the cover — King Shark (who now looks more like a hammerhead, and it works), pyrokinetic El Diablo, Black Spider, the electrical Voltaic, and some unidentified guy with a blade, all of whom are under the sadistic thumb of handler Amanda Waller (who this time around has apparently gone to Weight Watchers), and the first issue sees the Squad horribly tortured as a test of their individual mettle. As this ordeal goes on, we get looks into the heads of a few of the characters, after which our protagonists are unceremoniously and literally dumped into a mission of a highly questionable sort, the commencement of which we'll get to next issue. Bottom line: SUICIDE SQUAD is a collection of deadly and twisted misfits that I will definitely return to next month. I just hope the established level of quality holds... 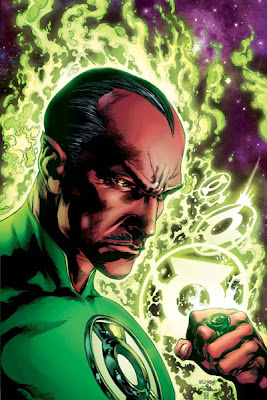 Apparently utterly unaffected by the events at the end of FLASHPOINT, GREEN LANTERN #1 finds Sinestro again chosen to work for the Guardians (he's not happy about it) while a ringless Hal Jordan's life spirals down the bowl. This is a good return to form after the back-to-back boredom of BLACKEST NIGHT and BRIGHTEST DAY but if if you haven't been reading GL for the past couple of years, you may be lost without a road map. Also, taking into account how Green Lantern stories in recent years have started out well and then turned to straight-up shite, I'm not going into this without a certain sense of wariness. 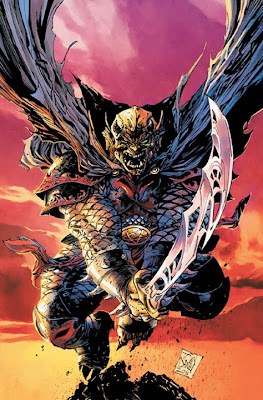 Not at all what I expected from an Etrigan relaunch, DEMON KNIGHTS debuts as a straight-up fantasy book set during the dark ages. Jason Blood and his demonic other self, Etrigan (aka The Demon) are partnered with Madame Xanadu (who is Etrigan's lover) and Vandal Savage, a re-imagined-as-female Shining Knight, and a character who may be a Themiscyran expat. A tempting opening that reads a lot like a well-realized D&D campaign translated into comics form, but this needed to be a 48-pager. I'll give it another issue or two to see where it goes. 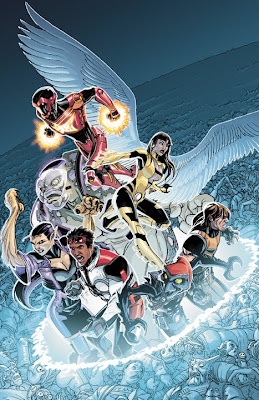 For a book that's supposed to attract new readers, LEGION LOST #1 offers Legion tropes that — and I say this as a Legion fan of thirty-eight years — have been run into the ground, and, if things go as they have for the past thirty-some-odd years (which is not unlikely), such will continue to be the case. An assortment of Legionnaires are lost in time — again — and other than some very nice art (the new designs for Wildfire and Dawnstar are great) and an intriguing Durlan character, this is just an example of a by-the-numbers Legion story. Also, Timber Wolf is written to be more like Wolverine than ever, and that was a distinct turn-off. Nice art by Pete Woods notwithstanding, I doubt I'll return to this. 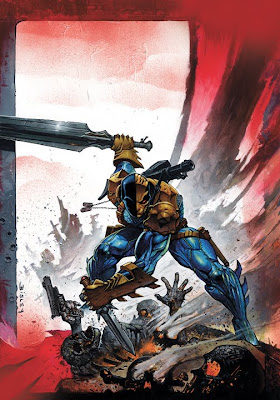 Thankfully having nothing to do with his long connection with the Teen Titans — and I hope it stays that way — this first issue of DEATHSTROKE rocked. HARD. As nasty and violent as it needed to be, this issue perfectly defines what a monumental badass Slade Wilson is without going into the minutia of his origins, and that's just fine by me. Give me a meta-human mercenary with physical skills comparable to those of Captain America, virtually no morals, and a high set of professional standards, and you have my attention. I will definitely be back next month! 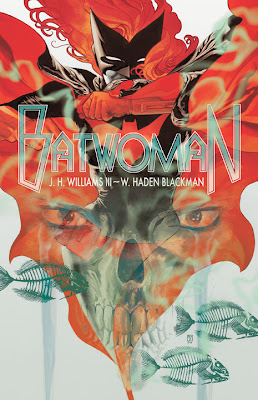 For the past few years, I've read a lot of positive buzz about Batwoman and also heard friends and former colleagues who I respect say that the character's previous run was very good. I am perfectly willing to believe that but I never checked her out because I missed the initial installment, and then lost track of which collected editions I would need to pick up in order to get caught up. After that, I just lost interest. This eagerly-awaited (by some) first issue is well-written and very nicely illustrated, but BATWOMAN #1 left me cold. There's no explanation as to who the main characters are — the only one I had prior knowledge of was Detective Maggie Sawyer, and I've always liked her a lot — and the story just didn't grab me enough to make me a returning reader. If you're already a Batwoman fan, this seems to have been written just for those already familiar with her and her portion of Gotham. All others may want to give this a miss or catch up via collections of the preceding material. Me, I'm out. 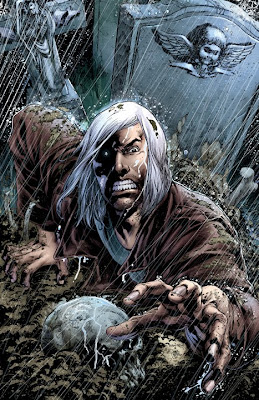 A well-crafted issue that did absolutely nothing for me. There are those who loved RESURRECTION MAN during its prior run but since I've been an avid reader of the WILD CARDS novels and am very familiar with the Sleeper, I was never impressed. The Sleeper and Resurrection Man, where it really counts, are virtually the same character; The Sleeper gains a different power whenever he awakens from a long sleep, while Resurrection Man does the same after he dies. Their personalities are markedly different — the Sleeper is a career criminal who fears going to sleep in case he may die, so while awake he doses himself with fistfuls of amphetamines and becomes dangerously psychotic and violent until he finally crashes — but the hook here is in the power, and I've seen it before and done better. And, since she turns up here and in other books, is Madame Xanadu being groomed as a major recurring presence in the DCnU?

And here's the non-DCnU stuff I got my hands on: 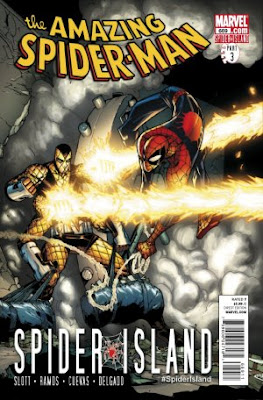 The latest chapter in the "Spider-Island" event proves once again that Dan Slott = quality storytelling. That said, I'm still not a fan of Humberto Ramos' art — I've actively disliked the guy's stuff for well over a decade — but there are those who dig it and I admit that he's improved immensely since his early days. At least he finally stopped drawing everybody with disproportionately huge feet, supplemented with cankles.

FEAR ITSELF: THE MONKEY KING (one-shot) 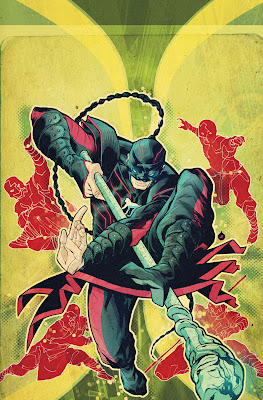 This one-shot spinoff from Marvel's FEAR ITSELF event sets up a Chinese hero, formerly a crime boss, who possess the power of Sun Wukong, the legendary literary hero known as the Monkey King. For those who never read Wu Cheng En's classic JOURNEY TO THE WEST, Sun Wukong is a character of incredible super-powers and martial arts skills, basically the perfect fantasy hero, so he's right up my alley. I hope to see more of Marvel's version as soon as possible, because the world is a barren place without more kung fu heroes. 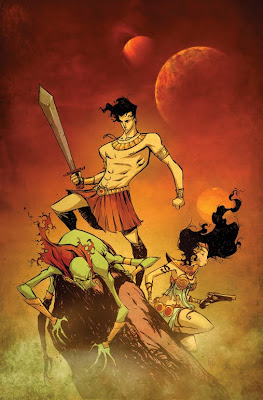 A real surprise, this adaptation of A PRINCESS OF MARS (issue 1 of 5) is kind of an abridged version of the oft-told story of John Carter's early days on Barsoom, but it's very lively and I'm surprised by how much I enjoyed Filipe Andrade's very "cartoony artwork." Some of my fellow Burroughs purists may object, but I found it a refreshingly different take on a story and characters I've been familiar with since childhood, so I will definitely be back next month.
Posted by Bunche (pop culture ronin) at Thursday, September 15, 2011

I must say, I've been enjoying your forays into the DC re-launch. Your criticisms have been pretty even-handed and in some cases, I think you've been down right generous. But as a semi-employed entertainment guy myself, I've simply gotta ask: as I follow your jobbing articles on this blog, is a return to comics a possibility? I say that (hoping I haven't just tapped your third rail) because I can't imagine a better editor than someone like yourself. Someone who is knowledgeable and passionate about comics and its business side could only be a boon to some kid starting out and a balm to some grizzled vet as you compare scars. And I keep coming back to this site because I like the writing, so surely you must have a character or two knocking around that you'd like to try, so: any chance of you doing something professionally with the medium again?

Listen, I also realize that this might not be something you want to post in an open forum, so please feel free to respond at your leisure to my gmail address that has to come along with the comment. Again, I don't mean to be impudent, I'm just, well, curious...