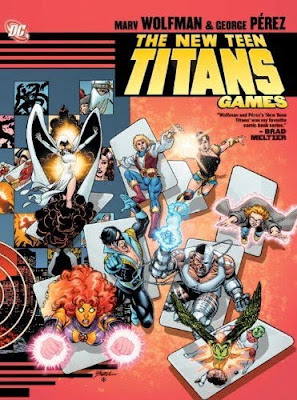 This hardcover graphic novel is not due out for another two weeks but a copy of it fell into my hands, so I had to read it and get back to you with the skinny.

I loved the majority of the Marv Wolfman/George Perez era of THE NEW TEEN TITANS as it was coming out on a monthly basis and I still think it was one of DC's strongest runs from the pre-DARK KNIGHT RETURNS and WATCHMEN 1980's. It looked and read like a top-level Marvel book — which surely must have been a sticking point for those firmly committed to one-company blind loyalty — and when it came to characterization in mainstream comics, it was second to none. But nothing lasts forever and, in my humble opinion, it pretty much ran out of gas by around the time Donna married that dude who looked like the JOY OF PAINTING "happy little trees" guy. After that the Titans pretty much cruised along based on fond memories of the glory days, and every now and then there would be a glimmer of the Wolfman/Perez brilliance, but nothing of any merit as a true successor on a steady basis. Now it's thirty-one years since the Wolfman/Perez TITANS hit, and after a lengthy gestation — one stretching from 1988 until now — the long-awaited original TITANS graphic novel, "Games," is here, and I have to say that I don't necessarily think it was worth the wait.

In "Games," the Titans are pitted against an insane master strategist known as the Gamesmaster, a former designer of war games for the Central Bureau of Intelligence who has a major hatred for vintage DC government spook King Farraday. The Gamesmaster plots to wreak all manner of terrible havoc, including the destruction of New York City, so Farraday press-gangs the Titans into aiding him in his efforts to thwart the madman, alerting them to the Gamesmaster's plans to cause harm to those closest to the Titans in their civilian lives. The usual cat-and-mouse found in stories like this ensues and tensions escalate between Farraday and the Titans, as well as between the Titans themselves, and it's a race against time and a crew of skilled and dangerous operatives set in place by the Gamesmaster.

The flavor of the work is definitely that of the Wolfman/Perez we know and love, but the story itself, despite the obvious effort that went into crafting it, comes off as rote and, if truth be told, rather stale. This is a work by two industry legends who have both moved on from their take on the Titans, so this piece is something of a throwback to the days just after the series ran out of creative steam and was running on fumes. Perez's art is as gorgeous as usual, some of the best of his career (and it's aided and abetted by the format's larger scale and printing that allows for crisp image resolution and vibrant colors), but the story is too pedestrian for what fans of the original series may be expecting.

Priced at $24.99, the bottom line here is that it's pretty to look at — very pretty to look at — but I cannot in good faith recommend it to anyone other than Perez fans and TITANS diehards. It's not bad, but the overall result ends up being mediocre.
Posted by Bunche (pop culture ronin) at Thursday, September 15, 2011