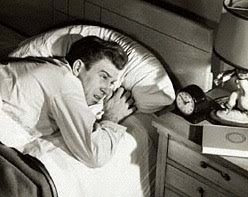 As I write this it's just turned 4AM.

One thing I learned very early during my formative years is that you do not get in the middle of a couple having a loud, furniture-destroying domestic dispute, and for the past hour and a half I've put that lesson into action. The volatile couple who live just down the hall are loud as hell at the best of times — once notoriously not caring to close their apartment door while they fucked like it was prom night — and they often quarrel at a volume that could wake the long-deceased. But tonight I was awakened by their usual histrionics coupled with the concussive sounds of heavy furniture being overturned, glass shattering and any object that hadn't been nailed down rebounding off of walls. Apparently the male of the couple came home quite drunk and the lady just wasn't having it, so they predictably argued and their spat escalated to the level previously described, things only dying down when two of my other neighbors yelled at them for waking up half the building, then calling the police. The male of the couple then managed to get his shit together enough to stagger out of the building and back into the night, presumably to hit one of the local dive bars.

The weary-sounding cops have just left after getting a statement from the still fuming lady and it is now nearly four-thirty. I hope to get back to sleep and stay that way for at least another hour or two, but that seems unlikely now that a large garbage truck sits idling outside my building. Oh, well, at least it's not the whores from the brothel down the street fighting over which Heineken-soused pensioner they'll be blowing before calling it a night.
Posted by Bunche (pop culture ronin) at Tuesday, March 04, 2008

Ahh... Brooklyn...is there not end to the joy you provide.

but i don't even drink heineken!