NYC SUBWAY AD OF THE WEEK

As seen at the 42nd Street/Times Square station: 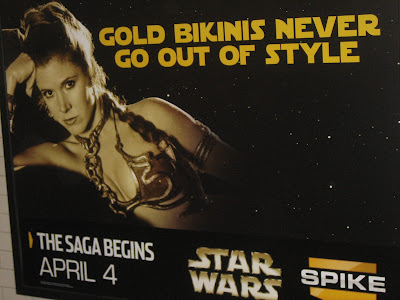 Can you believe RETURN OF THE JEDI came out twenty-five years ago? Once maligned as the worst of the STAR WARS series, JEDI has since been given new luster thanks to the almost-universally-agreed-upon lousiness of chapters one through three, whose Jar-Jar Binks single-handedly eclipsed the balls-out nightmare of the obnoxious Ewoks (a group never once named onscreen, but thanks to the power of Lucasfilm's marketing machine everyone in the world knows what to call them). And while the slave-girl getup was pretty tasty, I thought she looked great from the beginning in the white outfit (with what appeared to be no bra, ah, the seventies...), even with that stupid double-pastry hairdo. Hell, given the opportunity, I'd still do Carrie Fisher. Oh, like you wouldn't.
Posted by Bunche (pop culture ronin) at Thursday, March 27, 2008

I, too, just saw this add tonight and was dumbfounded... Carrie Muthafuckin Fisher was hot!! It took me years to see "Jedi" 'cause I was just too damn stubborn to realize that the feminine pulchritude that was Ms. Fisher super seceded what amounted to a flick about "cutesy" aliens.

God bless that golden bikini... if only our significant others could indulge us with that outfit just once in our lives!