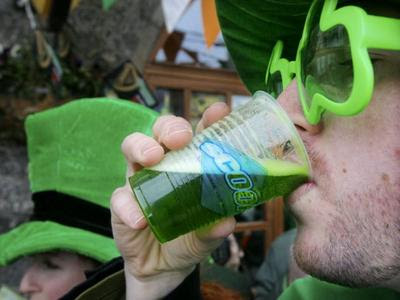 So it's Saint Patrick's Day 2008, and I'm going to stay off the streets of New York tonight while the populace at large gets Viking-level destroyed on their fermented beverages of choice. During the bygone days of my misspent youth I gladly joined in the revelry, happy that this one day of the year was more or less given over to everybody getting completely fucked up and shedding the burden of being human, but Saint Patrick's Day has long since lost its allure for me thanks to growing up (sort of) and having worked the last two St. Paddy's at the barbecue joint. The joint opened three years ago today, and St. Paddy's is as good a day as any for the anniversary of that fine dining establishment, but it became a bit overwhelming and the altered behavior of most of the crowd in attendance got rather David Lynchian in its crawly strangeness.

And I don't know about the rest of the nation, but New York City in the throes of intoxicated Irish pride is an untamable green-clad beast that yowls and screeches random Pogues hits in tones even more unintelligible than those found in a live performance by the band's toothless wreck of a front man, Shane McGowan. Seriously, it took me years to decipher McGowan's wasted warbling during his infamous Saint Patrick's Day performance of "Body of An American" on SATURDAY NIGHT LIVE back in 1990. 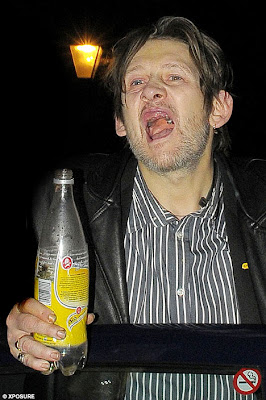 The might and Majesty that is Shane McGowan.
There's a strange blend of good feelings and ready-to-erupt primal savagery that permeates the air on this day, a palpable buzz of expectation and yearning that mutates into the full gamut of human emotion once strong drink is introduced into the mix. Fucking and fighting are practically guaranteed, occasionally at the same time, and every bar in the city is sure to be packed to the rafters with folks decked out in cheap plastic Leprechaun hats and "Kiss Me I'm Irish" t-shirts, merrily gobbling up free and fatty corned beef and cabbage while swilling down foul-tasting beer tinted with green food coloring, a libation barely a step up from McDonald's odious seasonal horror, the Shamrock Shake. 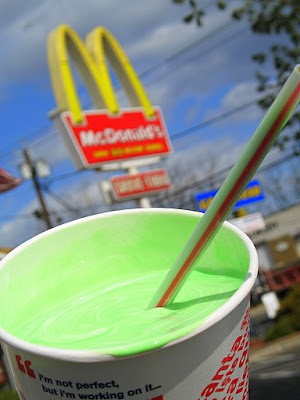 The Shamrock Shake: minty taste treat, or mass-marketed bio-hazard sludge?
But the worst thing to come from all of this is the day-after remains of hardcore partying, namely broken bottles everywhere, carelessly discarded party cups, rivers of reeking piss provided by both men and women, and, worst of all, sidewalks that have been copiously adorned with spewn beer and partially-digested food, making the streets look like they've been carpeted with day-old corned beef hash. I shit you not, in some years the pavement was so puked-out that one could easily have skated on the vomit, this phenomenon being especially bad near the Park Avenue offices of Marvel Comics during the early-1990's.

The morning after also sees the subways smelling of fetid beer and drunks who have voided themselves in all possible ways without the benefit of having a restroom close at hand. The floors are glazed with spilled drinks, and your feet stick to the linoleum like flypaper. Just plain revolting. 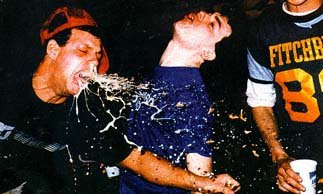 Please don't get me wrong; I totally understand the need to let off steam and get buck-wild, but St. Paddy's Day is rightfully termed "amateur night" by those of us who know how to properly get our drink on and not inflict out-of-control, sloppy assholism on the innocent citizenry, so we tend to sit this day out. Have you ever been out on St. Paddy's Day and had some boozed-up Bronx chick with big tits and green hair chat you up only to get close to you and bark up her dinner and last six shots of Jameson all over your chest? Well I have, and I can assure you that it completely harshed my evening and forced me to shell out ten bucks for one of those "I Heart NY" t-shirts to replace the vomit-sponge that the shirt I'd worn had become. Sorry, but stark white with a touristy slogan simply is not my aesthetic.

And why is it that a day that supposedly celebrates all things Irish invariably degenerates into a reinforcement of the drunken Mick stereotype? The Irish have contributed so much worthwhile literature, music, and who knows what else to the world, but other than being thrown a bone in any one of a gazillion St. Paddy's Day parades little, if any, mention is made of that. As far as the public at large seems to be concerned, on St. Paddy's Day the greatest contribution made by the Irish is whiskey. That's a damned shame when one takes into account what a genuinely wonderful people the Irish are, a group overflowing with a no-bullshit humanity and honesty of expression that's just plain endearing. My buddies Hughes, Amanda, Garth, and Tracey the waitress goddess are prime examples of this, and many of my other friends and acquaintances whose ancestry hails from Ireland are equally as awesome. 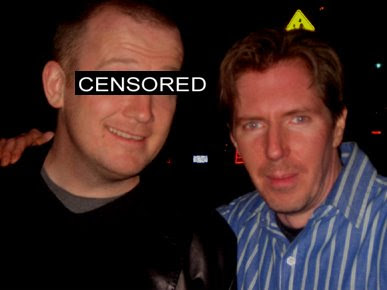 Garth and Hughes, two of my favorite people.
So maybe that's what should be concentrated upon on Saint Patrick's Day, namely the oft-ignored excellence of our society's Irish component. And while we're at it, how about a marathon of flicks like THE QUIET MAN, DARBY O'GILL AND THE LITTLE PEOPLE, and THE LUCK OF THE IRISH? So even though the drunken idiots of all ethnicities out there may unintentionally be a rampaging annoyance, show some love to any of the Irish who may be in your life. And be careful when walking on those barf-splattered sidewalks, 'cause falling down and breaking your ass on concrete is bad enough, but having that happen with added accent of having your body coated with slimy, half-digested bar food is simply horrendous. 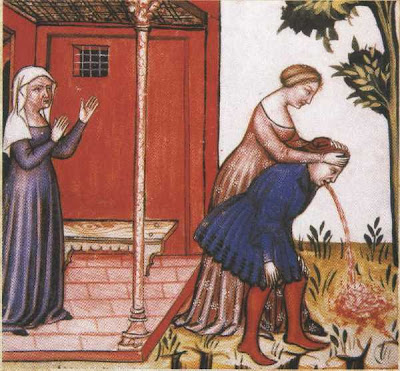