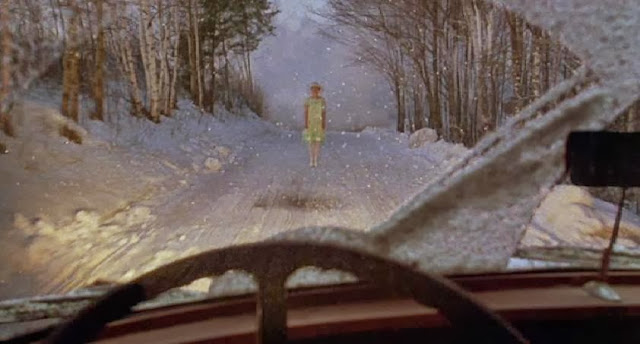 The inescapable, implacable spectre of Alma Mobley (Alice Krige) gets down to the business of supernatural vengeance.

When David Wanderley (Craig Wasson) falls naked to his death after seeing his lover turn into a rotting corpse, his twin brother, Don (also played by Wasson), returns to their snowbound hometown of Milburn, where he reunites with his semi-estranged father, Edward (Douglas fairbanks, Jr.). The old man is a member of the Chowder Society (also including John Houseman, Melvyn Douglas, and Fred Astaire), all of whom have been plagued with nightmares, and it is soon revealed that they all share in common past association with a beautiful and mysterious young woman who Don knew and romanced as Alma Mobley (Alice Krige), and whom the Chowder society knew as Eva Galli fifty-two years earlier. Alma breezed into Don's life from out of nowhere and the pair embarked on an all-consuming affair that saw Don neglect nearly all aspects of his life until Alma began displaying creepy, seemingly insane behavior and evidenced an unnatural physical coldness. Though they had become engaged to be married, Don calls off the nuptials when he senses that there's something unreal and disturbing about his bride-to-be, and in no time she hooks up with his twin, whose supernaturally-induced plummet and demise set the whole narrative in motion. As the mysterious woman manifests in Milburn and begins killing off the Chowder Society one by one, a simple question remains: Just who is this ageless Alma Mobley and why does she want these men dead? 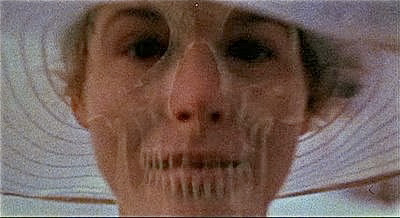 GHOST STORY is based on Peter Straub's 1979 best-seller and from all accounts was something of a masterpiece, rich in its layers, themes, and horrific poetry, in other words, the kind of literature that would be damned near impossible to faithfully translate to the screen. I tried to read the novel around the time the movie adaptation came out but it was too dense and "grown-up" for my sixteen-year-old mind, so I went into the movie cold. (I had enough going on at the time, what with navigating the confusing and torturous labyrinth of adolescent insecurities, family dysfunction, girls, and the social arena that was high school.) The movie frustrated the hell out of me when it came out, because it had all of the elements of a classic in place but none of it gelled into anything other than a well-appointed time-waster. Its great cast is squandered on a plodding, rather rote spectral vengeance yarn that doesn't really get interesting until the why of Alma Mobley/Eva Galli is revealed, by which point it's too little too late,  and it's not even the least bit scary. (Eerie, yes, but not scary.) The movie reportedly severely dumbs down the book's content and also alters the plot to a certain degree, but even if I had not gone into the film with knowledge of the source novel's lofty reputation, I would still have been disappointed by what I ended up with.

When it came time to do this year's month of horror movie overviews, I put GHOST STORY on my final roster after having postponed it for the last two years, simply because I had to find myself in exactly the right mood to sit through it again. That mood finally hit me about a week ago and I hoped that the distance of thirty-two years would have gained me an adult perspective that would have allowed me to find some sort of missed nuances or sense of dread that may have gone over my head in my youth, but I'm sad to say that I have to hold by my sixteen-year-old self's original assessment. GHOST STORY, despite being a welcome change of pace from its era's cornucopia of cheapjack slasher gore fests, stands as a by-the-numbers shell of what was clearly a work of greater substance. Then as now, the only thing the film has going for it is a great ghost —Krige is truly haunting and very menacing — and a solid cast, but it's too bad there wasn't a script at hand that was worthy of them. Recommended solely for those fascinated by tales of hauntings and vengeful spirits. 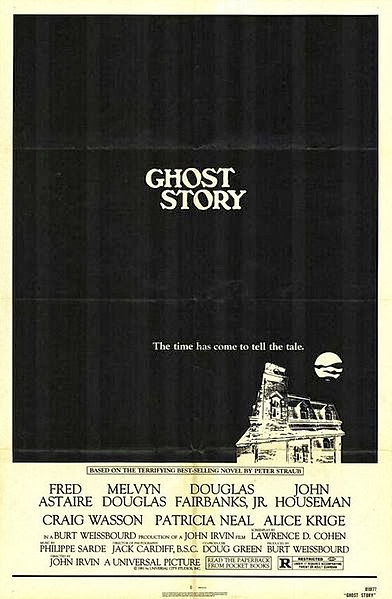 Poster from the original theatrical release. Even the poster was dull.
Posted by Bunche (pop culture ronin) at Thursday, October 10, 2013