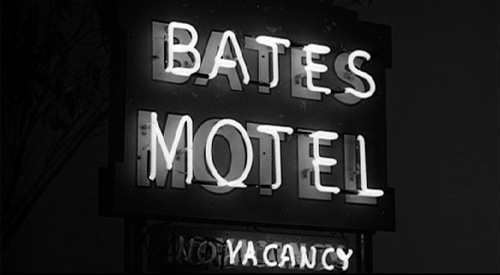 WARNING: this post assumes the reader has seen PSYCHO and therefore it contains spoilers. If you have not seen PSYCHO, where the fuck have you been for the last five decades? Living under a rock in the tiny republic of Togo? See it immediately, damn you!

Alfred Hitchcock’s landmark film, PSYCHO, one of the all-time classics of horror and suspense, and the film that can arguably be considered the granddaddy of the “slasher” genre. Three years ago, when I informed my mom that it had been a half-century since the film came out, she couldn’t believe it had been so long since she’d seen it during its original run, and she once again regaled me with the tale of how after seeing that movie, she refused to shower in the house unless another person was around.

To me, it’s hard to believe there was ever a time when PSYCHO wasn’t around. I’m forty-eight years old and during my lifetime PSYCHO has gone on to become a part of world cinema’s DNA and has been a point of reference and jokes more times than I can possibly count, such was its impact. Yet somehow there are still people out there who have managed to reach adulthood without having seen it, and one of those people was She Who Cannot Be Named, an ex-girlfriend from three years ago. Having devoted much of her growing-up years to being a diligent student (unlike me, who loathed virtually every moment of my organized schooling), she has missed innumerable classic (and not-so-classic) films that you or I would take it as a given that the average person would have experienced, so you can imagine how I was champing at the bit to fill her head with a literal cornucopia of cinema from all genres and decades. With that goal in mind, when I heard that Manhattan’s Film Forum was running a screening of PSYCHO in honor of its golden anniversary, I fairly leapt at the chance to finally see it projected and haul She Who Cannot Be Named along.

Once I’d procured tickets, I made sure to advise She Who Cannot Be Named about not letting anyone spoil any of the film’s particulars for her, and things were going well in that department until one of her grad school courses ran footage from the sequence where Norman sinks Marian Crane’s car into the marsh behind the Bates Motel. When the girlfriend told me that she’d seen that bit, I was a little annoyed but not as much as I could have been because when taken out of context that scene reveals nothing. Also, when the segment was about to be discussed in class, one of her classmates was kind enough to stand up and announce to the class that out of kindness to those who had never seen PSYCHO, they should keep mum on the details of the story. That was very gentlemanly of him, but I soon reached a state of apoplexy when She Who Cannot Be Named told me that right after that guy’s consideration of the few PSYCHO newbies in the class, some galloping asshat stated flat-out that Norman was the killer. When she told me that during our pre-screening dinner, I nearly hit the roof.

Undaunted, we made our way to the Film Forum and met up with my pal Suzi. As the girls hit the ladies’ room, I stood up and asked the audience if there was anyone in attendance that had not yet seen the film, and when a few hands shot ceilingward, I asked the audience not to give anything away. They all nodded in knowing agreement, and when the girls got back I settled in and absorbed PSYCHO on the (relatively) big screen for the first time. (I have seen the film many, many times since the late 1970’s and know it inside and out, but I was genuinely excited to see it projected and with an eager audience.)

If you’ve read this far despite the spoiler warning, then it’s safe to assume that you’ve already seen the movie, so I won’t bother to recount the plot. Instead, I’ll just make some observations. 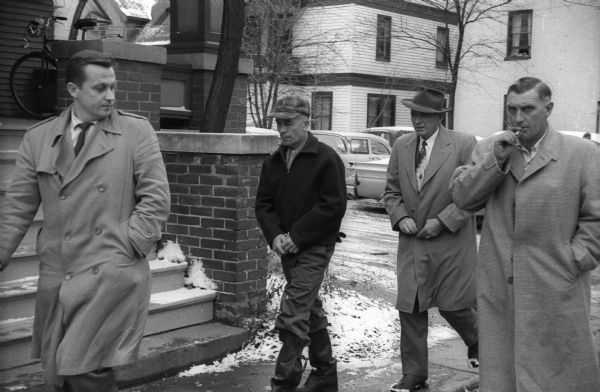 Ed Gein, the real-life inspiration for Norman Bates (among others), being led to the crime lab.

For those not in the know (and making a very long, complex and downright fucking horrible story short), Ed Gein was the textbook example of the town "quiet soul" that everyone knew and thought was a little odd but harmless, only to have it revealed that he was not only bullmoose crazy, but also capable of acts of such outright stomach-churning blackness that even hardened homicide detectives found his acts literally nauseating. Among other elements lifted from the Gein case for author Robert Bloch's source novel of PSYCHO can be found a grown man's very serious mother issues, questionable hobbies and handicrafts, and a marked gender-confusion, so the moviegoing audience no doubt remembered those details as they watched Hitchcock's creepy low-budget flick unspool across the nation. 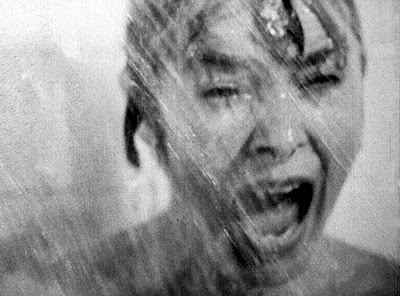 And think about this: more than fifty years later, Marion Crane is still the most famous murder victim in screen history. 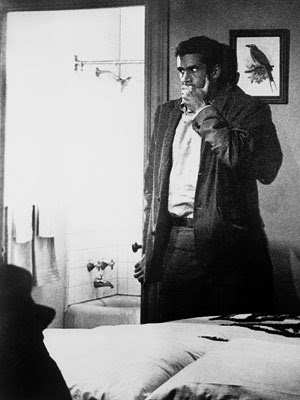 Instead it seems like he's covering for his crazy mother, so the big reveal in the fruit cellar leaves one gobsmacked, a feeling that's compounded when Norman's pathology is outlined in detail during the epilogue. 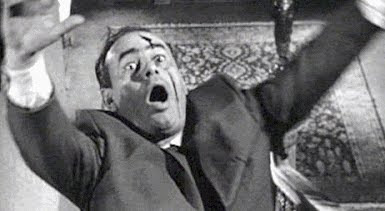 The shower sequence is rightly hailed as a classic, but there's something so BANG! about when Arbogast is slashed across the face and sent tumbling off-balance, backwards, down the stairs, arms flailing, only to have "Mrs. Bates" land atop him and go to work with that chef's knife. Marion was naked and in a shower, so she had pretty much no chance to defend herself, but Arbogast might have had a chance had he not been expecting to be able to nose about in the home of a presumed invalid, so the audience really feels it when he meets his grim fate. When that moment came, I could have sworn my girlfriend jumped out of her skin.
And with that I urge you to watch PSYCHO again, simply to be reminded of how they just don't make 'em like they used to. 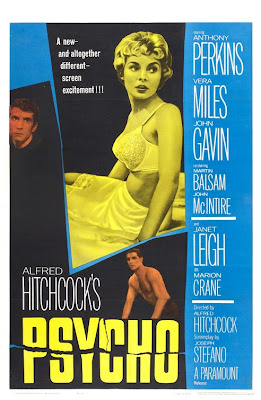 An excellent month's worth of work Mr. Bunche.

Now I have to find Frankenstein's Island on dvd!