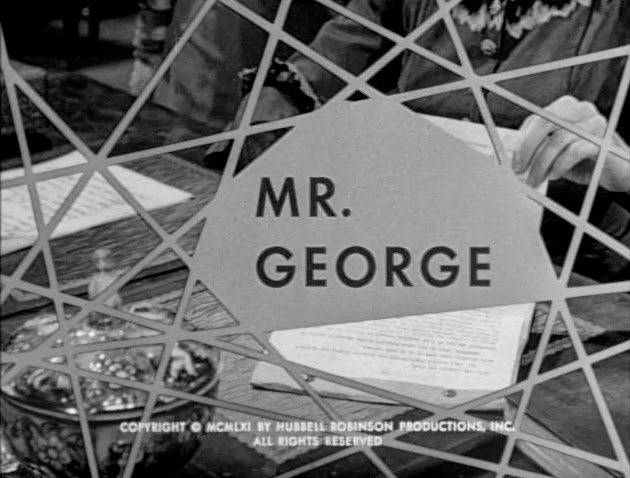 Sometime around 1900, a sweet little girl named Priscilla (Gina Gillespie) inherits a fortune and her three adult guardians plot to kill her so they'll be next in line for the cash. The heartless trio, led by the cold-as-stone Aunt Edna (Virginia Gregg), could not possibly care less for poor Priscilla and can't wait to send her to join her recently-deceased mother, so it's a damned good thing that she's got a friend like Mr. George. It should be stressed that Priscilla is very young and apparently rather sheltered, so she does not yet grasp the concept of death, which is probably a good thing since Mr. George is the unseen ghost of an adored close friend of her dead mom. (It is alluded to that Mr. George may have been Priscilla's father out of wedlock, which was pretty scandalous for the story's era.) With Priscilla's imminent "accidental" death being actively orchestrated by three foul grownups, Mr. George moves to protect the child and it's quite clear that he has zeru mercy for those who would do the little girl harm... 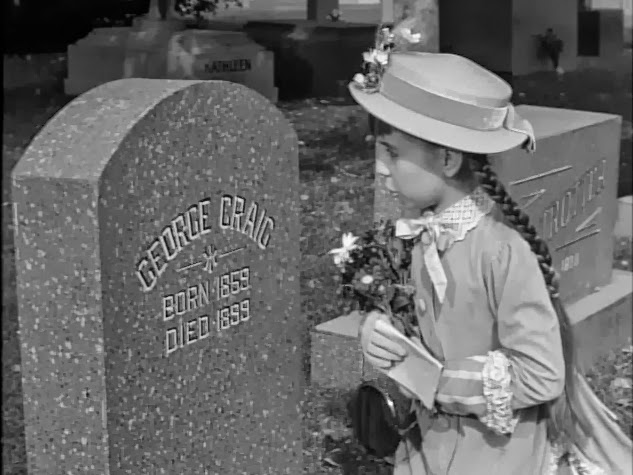 Wee Priscilla (Gina Gillespie), who doesn't grasp the concept of death, visits the grave of her dear, departed friend, Mr. George, and wishes he'd come back to live with her. Smart move, kid!

Based on a WEIRD TALES story by August Derleth (who wrote it under the pseudonym of Stephen Grendon), this installment of the legendary anthology series THRILLER (1960-1962) doesn't deliver the kind of outright scares the series became famous for, but I include it here for a couple of very good reasons. Remember when you were still just a very little child and your doting elders told you scary stories about kids who ran afoul of wicked step-parents, monsters, and other dire forces that would visit all manner of awfulness upon the story's kid protagonists with whom you identified because you were also a small, relatively helpless entity in a big world full of equally big dangers? I can't speak for you, but I certainly remember those stories and I always feared for the protagonists' well-being, so I welcomed whatever outside help they could get, and MR. GEORGE brought me right back to those long ago days of my childhood. And while there are many stories of children being aided by magical/supernatural friends and helpers, I especially like the how the particulars of this ghost story allow for the spook in question to outright kill Priscilla's would-be murderers and allow the audience to not only be unafraid of Mr. George, but also to flat-out root for him. Though unseen (but soothingly voiced by Les Tremayne), he looks out for the lonely little girl with diligence and serves as her invisible playmate (which only makes her appear insane to her guardians), plus, when he dispatches the deserving blackguards, especially the foul Aunt Edna, he always makes sure his young charge is not present to witness anything gruesome. Who wouldn't love a shade of such fine moral calibre? 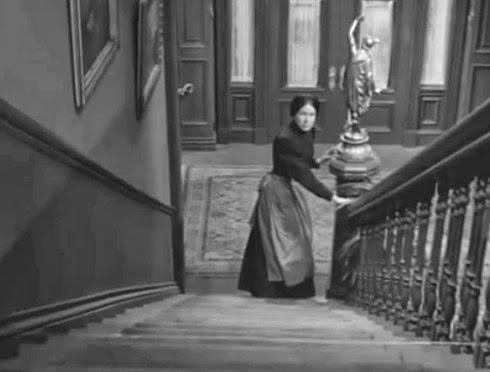 Aunt Edna (Virginia Gregg) strings a tripwire at the top of the stairs, in hope of sending her niece to an untimely death. Do you think Mr. George is going to put up with that kind of shit? Say it with me: Oh, HELL no.

MR. GEORGE is immeasurably more genteel than the kind of horror fare that I usually like, especially considering that I am not a fan of ghost stories in general, but this quiet little creeper charms on a kid's story level — though notably edgier than one would expect for a ghost story involving a child on TV from over half a century ago — and I recommend it as a primer entry for any little ones you know who may show a budding interest in horror. Be their cool elder and sit your little darlings down to spend some time with Priscilla and Mr. George. They'll be glad that you did.
Posted by Bunche (pop culture ronin) at Thursday, October 24, 2013