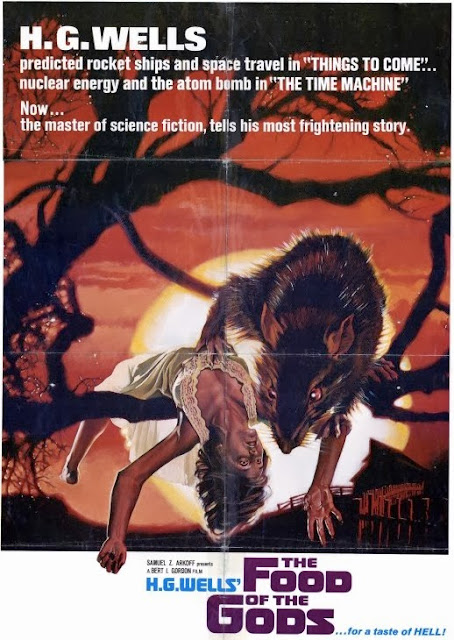 You know you're in trouble when the poster is far and away the scariest thing about a horror movie.

When a strange custard-like goo bursts forth from the earth in British Columbia, a farming couple feeds it to their chickens, considering it to be some sort of divine providence. (Sure. Feed an unknown, untested glop to one's livestock. Sounds like pure farming sense to me...) In no time the common barnyard fowl reach man-sized proportions, and the local worms. wasps, and rats also nosh on the ground-spew and of course go on a rampage against the farmers and an assortment of other humans who happen to be on hand. 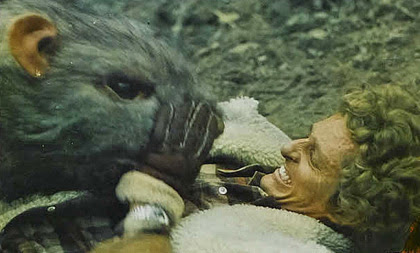 Part of the 1970's wave of "nature runs amok" flicks, THE FOOD OF THE GODS was an ultra-stupid entry into the genre that was a favorite of us kids who saw it back then because it actually delivered on the thrills promised in its ad campaign. Even as tweens we knew it was fucking ridiculous, but we didn't care because it was entertaining as hell to see folks getting attacked and/or eaten by giant critters. The rats were the big draw because being gnawed to death by rats en masse would be bad enough, but it's another thing altogether when they're the size of linebackers and played in closeup by guys in suits or represented by giant fake rat heads on poles. And, in a delightfully cheesy effect that dated back almost to the dawn of cinema, the rats were also often portrayed by actual rats that were placed on model props and shoddily superimposed into the action with the full-scale actors. To an eleven-year-old in the summer of the Bicentennial, it was magic. (Though, to tell the truth from an adult perspective, some of the material with the real rats would never fly if shot today. PETA would be all over the filmmakers in a heartbeat.) 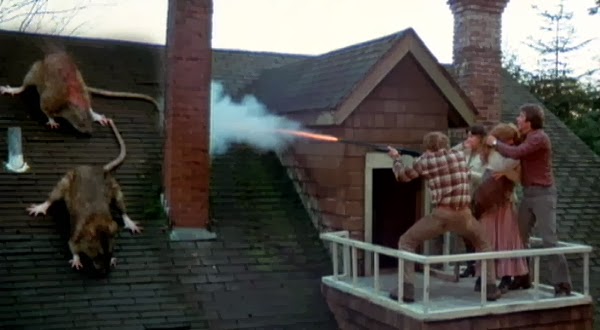 Surprisingly not filmed on location near NYC's Port Authority.

And while THE FOOD OF THE GODS was certainly a classic of utter mid-1970's cheese, its followup, EMPIRE OF THE ANTS (1977), managed to blow it out of the water in smoldering chunks when it came to balls-out "this has virtually nothing to do with the H.G. Wells source material" idiocy, and stands as a triumph of bad cinema. But that's a subject for another day...
Posted by Bunche (pop culture ronin) at Saturday, October 12, 2013