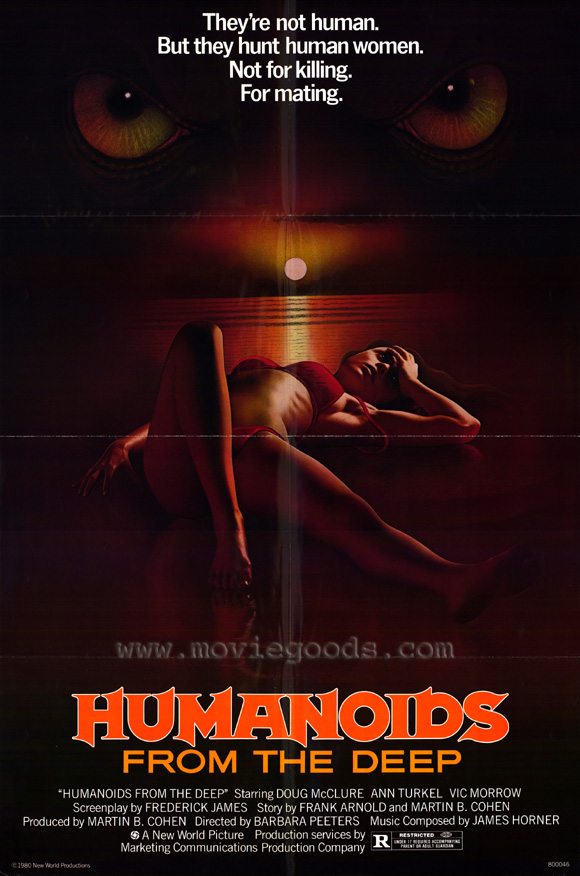 Poster from the original theatrical release.

When I was a wee Bunche I used to wonder exactly what the hell monsters like King Kong and the Creature From the Black Lagoon intended to do with their female captives once they got them back to a mountaintop retreat or an underwater cave. Sure, there was obvious lust or infatuation in play, but it just wasn’t feasible; Kong would have been thwarted by scale alone, and both he and Blacky faced the stumbling block of being species altogether other than human. But exploitation cinema has never been hindered by such considerations as logic, comparative biology, or even common sense, hence the existence of HUMANOIDS FROM THE DEEP, a classic bit of nastiness that unflinchingly depicts the public menace of horny fish-men who graphically rape beach bunnies in the name of a quick box office buck.

Coming out just two months after the slaughterhouse thrills of the original FRIDAY THE 13th, HUMANOIDS FROM THE DEEP just barely got in under the radar and avoided the willy-nilly trimming foisted upon the majority of horror flicks released not long after in response to the deluge of gory FRIDAY THE 13th cash-ins. By cutting out the gore and violence from films such as THE BURNING, HAPPY BIRTHDAY TO ME, and MY BLOODY VALENTINE robs such fare of its very raison d’etre, and if such a fate had befallen HUMANOIDS it would have ended up completely worthless instead of finding itself in the history books as a landmark of onscreen, tasteless misogyny and what you could once get away with under the guise of a horror/exploitation picture.

HUMANOIDS tries to be many things at once — a cautionary tale on tampering with nature, a rumination on racism, a would-be eye-opener on how badly the Native Americans got the shaft — and fails at everything it attempts, save for the infamous fish-rapes that are the key reason anyone saw it at all. Contrary to many reviews you’ll find, it’s quite slow-moving and absolutely uninvolving, populated as it is with total non-characters who exist only to deliver trite dialogue, get maimed by the monsters’ very sharp claws, or end up on the wrong end of a rock-hard, sea-dwelling cock. 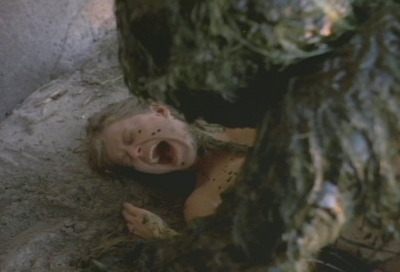 One of the more extreme moments from the "nature runs amok" sub-genre.

The film plods on and on between the mayhem, and when the incredibly offensive sight of shrieking girls pinned helplessly beneath the thrusting torsos of Charlie the Tuna’s butt-ugly cousins finally happens you’ll probably find yourself relieved that the film has finally come to ultra-sleazy life. And horrifying though it may be in concept, the fish-rape sequences veer straight into the territory of sheer absurdity and become somewhat giggle inducing. I’ve seen this film with a few women I could name, sleaze-fans all, and each one of them burst out in hysterics at the sight of a guy in a scaly latex getup with overlong arms and an exposed brain violating refugees from a BEACH PARTY movie. It’s one thing to read about such goings-on in a story by H.P. Lovecraft, but it’s another thing entirely to see such material enacted on a shoestring budget with camerawork that would have been right at home in a porno entitled SMELLS LIKE FISH Vol. 6. And, no, we don’t get to actually see the monsters’ fish sticks.

There’s not much story to speak of or care about, so all that remains is the nasty stuff, and that’s rather entertaining, especially the all-hell-breaks-loose final ten minutes or so, in which about a dozen of the monsters crash the town fair — conveniently located at the marina — and proceed to mutilate or fuck everyone in sight. 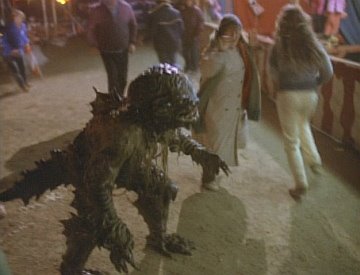 Just let these motherfuckers try this shit at Coney Island!

It’s balls-out insane, and once the smoke clears and all seems right in the world, the scene shifts to one of the fish-men’s victim’s about to give birth to a half-fish baby. The mother, now yellow-eyed thanks her trauma (?), howls and screams as her baby does a move straight out of the vastly superior ALIEN (1979) and rips its way straight up through her totally fake and greasy-looking belly, revealing itself to be a cheesy Muppet knockoff slathered with taco sauce. (If you ask me, the concept of that monstrosity entering the world via standard vaginal birth would have been a million times more horrific, especially from a thematic point of that delivery being a wholly-innatural nightmare.) 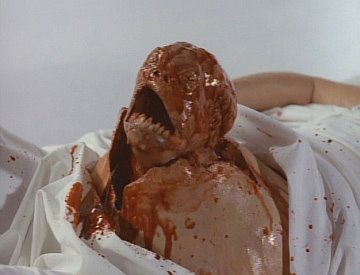 There’s an interesting story about the making of this film that claims director Barbara Peters was outraged to discover that infamous producer Roger Corman added the graphic rape scenes after the film was completed, totally without her knowledge. That kind of move from Corman wouldn’t surprise me in the least, but I’ve also read that makeup artist Rob Bottin — who also did stunning work in THE HOWLING and John Carpenter’s THE THING — has gone on record stating that he was one of the humping fish-men and his scenes were shot with Peters behind the camera, so it sounds like a classic case of backpedaling to me…

In short, HUMANOIDS FROM THE DEEP is completely fucking stupid and very dull, but the potent (pun intended) sleaze aspect makes it worth sitting through at least once, especially in a roomful of equally liquored-up and like-minded friends of cinematic crud. TRUST YER BUNCHE and have the Fast Forward button at the ready for when the prurient bits aren’t happening.
Posted by Bunche (pop culture ronin) at Friday, October 18, 2013