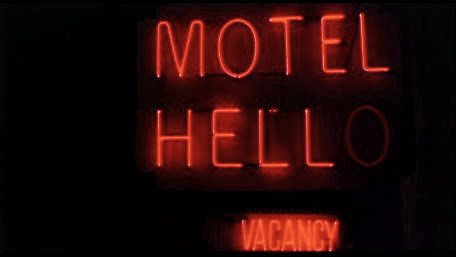 I hadn't seen MOTEL HELL pretty much since it first came out (I was fifteen at the time and rather distracted by girls), so I had forgotten everything about it save that it was about a backwoods farmer (Rory Calhoun) whose celebrated homemade smoked meats are crafted from a delicious blend of pork and human flesh, with the capable aid of his burly sister, Ida (Nancy Parsons). I'm kind of glad that I remembered as little as I did because my internal movie and pop culture reference base is far more in-depth than it was in those long-ago days, and now I know the movies and tropes that the film employs and pokes fun at. Yes, I'd forgotten that MOTEL HELL is more of a very dark comedy than anything else, and as such it has virtually no plot. It instead focuses on Farmer Vincent's creative methods of abducting passersby who will be planted up to their necks in his secret garden with their vocal chords slit, fattened up, and processed into usable meat for smoking. 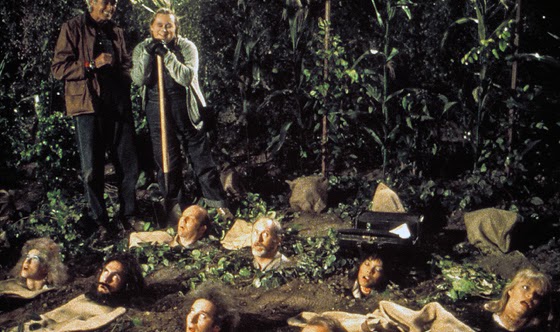 "It takes all kinds of critters to make Farmer Vincent's fritters." And how!

Yeah, there a sub-plot in which Farmer Vincent spares the life of one of his victims, a cute blonde named Terry (Nina Axelrod), grooming her to become his bride and the next member of his smoked meat cottage industry and the jealousy that spawns in Ida, but that's all very much beside the point when stacked up against the idea of a deranged farmer turning the eager local populace into unwitting cannibalistic gluttons.

Parodying the vibe of such "country terror" flicks 2000 MANIACS, DELIVERANCE (to some small degree), and of course THE TEXAS CHAIN SAW MASSACRE, MOTEL HELL comes off like an episode of GREEN ACRES as written by Charles Addams. It's not at all scary, features minimal gore, and is downright goofy, so don't go into it expecting anything even resembling a serious or gruesome shocker. However, the imagery of a chainsaw-wielding Farmer Vincent decked out in flannel shirt, overalls, and a huge, staring pig mask is truly the stuff of nightmares. 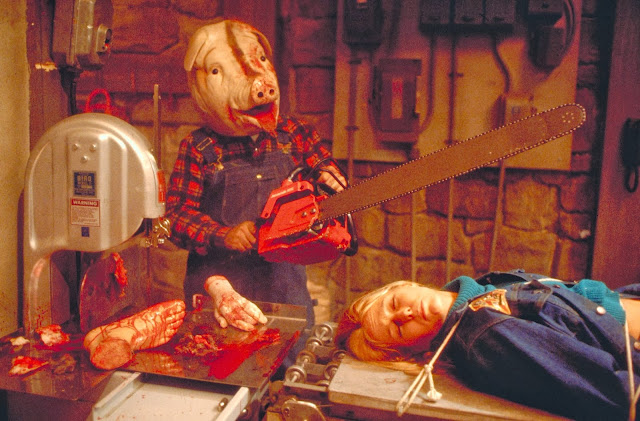 And though rated R, the film is light on gore, has only moderate profanity, and a smattering of bare tits. In fact, it's relatively innocuous enough to be suitable for kids ten and up, so give the kiddies a treat and let MOTEL HELL serve as their introduction to cannibalism as a common horror element. 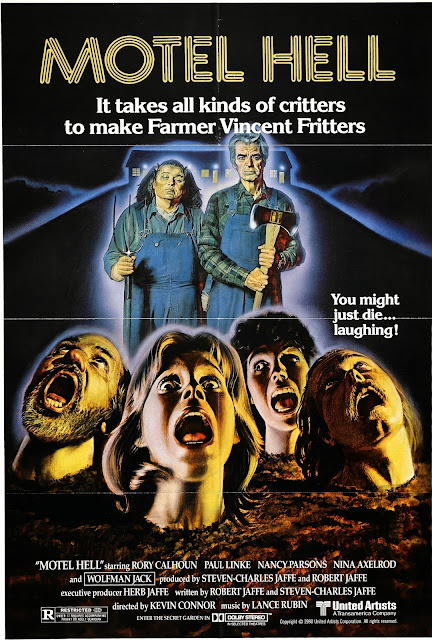