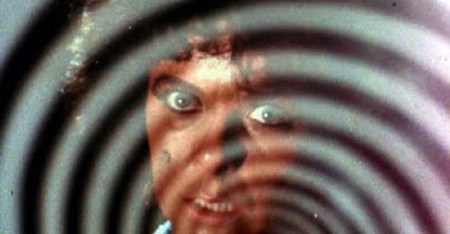 A young man (director Ray Dennis Steckler, operating under the alias of "Cash Flagg") wanders an amusement park midway and is hypnotically beguiled by a stripper whose fortune-telling sister further hypnotizes him, adds him to her growing army of mind-controlled "zombies," and sends him on a murder spree that ends in tragedy. Sounds simple, right? Well, that description does nothing to get across just how weird and dreamlike the ludicrously-named THE INCREDIBLY STRANGE CREATURES WHO STOPPED LIVING AND BECAME MIXED-UP ZOMBIES is. Though largely remembered for its long-assed title, the film is famed in the ranks of bad cinema for a number of legitimate reasons, but I would like to consider those perceived flaws as elements that render it a queazily-unique entry into the genre, and not just as a time-waster to be jeered at.

A reported budget of $35,000 wouldn't buy anyone much in terms of production values, not even five decades ago, so Steckler's independent effort had a hell of a lot stacked against it from the get-go. Yet, somehow the film's lack of budget works in its visual favor, with its cheap film stock lending the proceedings a squalid look that tonally evokes home movies taken in some bizarre parallel dimension only just out of synch with our own. Though not as good as either, the film has the same kind of eerie, off-kilter resonance as both CARNIVAL OF SOULS and ERASERHEAD, so a feeling of nervous dread permeates every frame, and I'm fairly certain none of that air is intentional. The film's rundown midway/boardwalk location also contributes much of this character, replete as it is with POV sequences shot on a careening roller coaster, crude animatronics of monkeys and clowns whose movements and recorded words are sheer nightmare fuel,  garish sideshow imagery and barkers shouting come-ons to curious, seedy gawkers ogling an assortment of rather dodgy showgirls. And speaking of those showgirls, the narrative has a particularly fractured aspect in that it frequently interrupts itself for several awful musical numbers that feature awkward choreography (the dancing duo of a tall Teutonic-looking guy in a Fred Astaire-style tux and a brunette who one would swear was a female impersonator is especially embarrassing to witness), garish costumes (one of which sports feather placement that gives the lead dancer's "area" the look of '70's bush as rendered by a drunk Dr. Seuss), and lyrics that stick in the viewer's head for all the wrong reasons ("Pied Piper of Love" has been known to randomly pop into my head, and when it does I become nearly homicidal), all introduced by an emcee whose attempts at humor are so utterly void of laughs that they could rightly be considered an exercise in dada. Again, the mind returns to ERASERHEAD, this time to its kinda/sorta musical number, "In Heaven Everything is Fine," only with several such performed-in-some-undefined-limbo moments padding out Steckler's creation's running time.

With this cornucopia of dreamlike/nightmarish elements dumping itself all over the screen, the plot, such as it is, is completely beside the point as the audience is subjected to what amounts to a visual tone poem broadcast from an alternate reality. The movie's intended goal of being a bona fide horror film does not gel, nor is its story of particular interest, yet it compels with its surreal, borderline-fever dream flavor. THE INCREDIBLY STRANGE CREATURES WHO STOPPED LIVING AND BECAME MIXED-UP ZOMBIES is certainly not for all tastes and it may not provide what most people consider to be entertainment worth sitting through, but I urge you to give it a chance for its morphine-esque daze, almost-perceptible sweaty/grimy odor, and dark amusement park mirror reflection our mundane world. (And having a pitcher of stiff adult libations close at hand is recommended during viewing.) 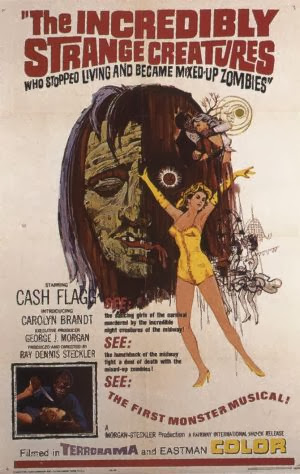