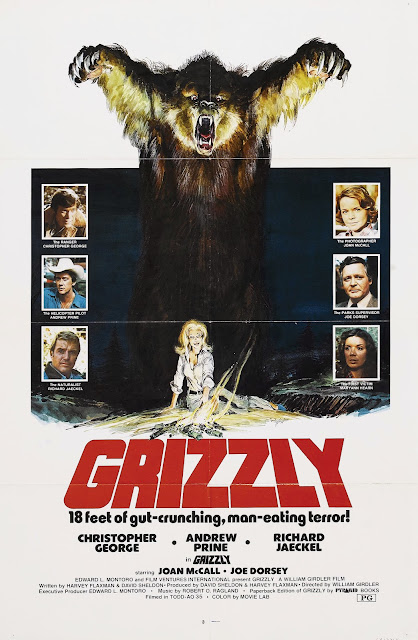 One of the all-time great tag lines. (art by comics legend Neal Adams)

Unless you've lived deep within the bowels of a cave somewhere in the lost valley of Quanxioatxl, odds are that you've seen JAWS (1975), aka the apex of the 1970's wave of "nature run amok" entertainment. It was a box office blockbuster — arguably the first of the kind we think of when the term comes up today — and has entered the world's collective pop culture lexicon, so it's as familiar as one's own ass. Simply put, there's pretty much no way that you have not experienced JAWS in some way, shape, or form. And with that kind of popularity/ubiquity and explosion all over the zeitgeist, it was inevitable that there would be movies that sought to cash-in on the public's hunger for stories about creatures that were hungry for the public. Thus we received GRIZZLY, by far the most shameless JAWS ripoff of its era — only to be eclipsed in the sheer, balls-out shamelessness of its mimicry by the Italian-made GREAT WHITE (1980), aka LAST SHARK — and, sadly one of the least interesting. As my friend Greaseball Johnny once so very accurately summed it up, you could take the script for JAWS, set it in a Yellowstone-like national park, cross out every instance of the word "shark" and substitute it with "bear," and you'd end up with GRIZZLY. Yes, there are minor differences in the number of people devoured by the titular predator and assorted individual plot points — such as the offending bruin being unceremoniously reduced to chipped beef by a well-placed shot from a bazooka — but there is no denying that this film is no more than a big ol' ripoff and it doesn't care to hide that fact one tiny bit.

Since GRIZZLY is basically JAWS starring a bear, there's no need to go into its plot and the only thing one can really say about it is that it's as pedestrian in its filmmaking as the average made-for-TV movie of its era, PG-rated gore and violence notwithstanding. My real reason for posting about this flick is to reminisce about the days long before I was hardened by cinematic carnage and mayhem, back when I was an impressionable eleven-year-old who'd allowed GRIZZLY's terrific poster and brutally lurid tie-in novelization to build up in my mind an horrific maelstrom of forest-bound terror. Some of my schoolmates talked me into going with them to see it at a matinee and I, not wanting to admit that the imagined excesses of the film had me scared stiff before I saw even one frame of the actual movie, went along to the Post Cinema for the thrills. Well — full disclosure, here — after the first of the ravenous bear's kills, which in retrospect was nowhere near as horrifyingly gory as I remembered it being for years, I hauled ass out of the theater's auditorium and spent the rest of the film's running time sitting on a cushioned bench in the lobby while my friends watched the rest of the film and the theater's staff behind the concession counter and the ticket booth mocked me for being an unmitigated pussy, a jeering I richly deserved.

The goriest moment in the entire movie. Yeah, I was a colossal pussy.

It was not until nearly a decade later that I again braved GRIZZLY, this being after coming of age during the era of the ubiquitous slasher genre, and when I finally saw what I'd walked out in a state of unabashed yellow-streak chickenheartedness, I was disgusted as what a wimp I had been during the summer of 1976. I have no excuse and now rest assured that ever since those days I can handle pretty much any form of charnel house frisson the screen throws at me.

2 William Girdler films? I think you must be a closet fan of the late auteur.