LET'S HEAR IT FOR FAGGOTS!!!

My buddy Tom reminded me of this news item that I first saw four years ago, and even though it's 100% serious I figured it would be a perfect tongue-in-cheek entry to coincide with Pride Month (I know C.C. will certainly find this amusing). And as if the article weren't enough of a crack-up, the family's name is Doody, for fuck's sake! 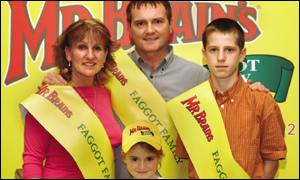 The Doody family hope to raise profile of faggots.

A West Midlands family is playing a central role in the quest to raise the profile of a forgotten British dish - faggots.

The Doody family from Wolverhampton has been crowned The Faggot Family in a national competition, and to kick off their reign they will launch National Faggot Week. The family will be touring the country extolling the virtues of the dish, which is best-known for its links with the Black Country.

The Doody family were chosen to front the campaign after impressing judges at the Savoy Hotel in London in November. They displayed their fanaticism for the delicacy during quizzes, role-plays and mock commercials.

"The nation knows that the Cornish pasty, Yorkshire pudding, haggis and fish and chips are great British dishes, but all too often the faggot is left off that list," said Janet Doody. Her husband Fred added: "It's unfair because faggots were a British delicacy long before any of the others. "The great British faggot is full of flavour and a great belly warmer at this time of year."

The family, including Lewis, 13, and Grace, 7, eat faggots twice a week, with mashed potato and mushy peas, and will be launching the awareness campaign on Tuesday at Liverpool University, followed by visits this week to Nottingham, Leeds, Sheffield and Birmingham.

The competition was organised by faggot producer Mr Brain's Faggots.

Faggot facts:
Faggots were called "savoury ducks" in the Middle Ages
Faggots were named after the Latin word for bundle
Faggots were originally made with pig's liver and offal
Faggots are now made from pork liver and pork
Fans have published the Good Faggot Guide

BUNCHE NOTE: I'm sorry, but "The great British faggot is full of flavour and a great belly warmer at this time of year" is simply one of the greatest quotes ever. And just so we're perfectly clear on what we're talking about, here's an excerpt from the Wikipedia entry on the subject:

A faggot is a kind of meatball, a traditional dish in the UK, especially the southwest of England, Wales, and the Black Country. It is made from meat off-cuts and offal, especially pork. A faggot is traditionally made from pig heart, liver and fatty belly meat or bacon minced together, with herbs added for flavouring and sometimes breadcrumbs. The mixture is shaped in the hand into balls, wrapped round with "caul" (a membrane from the pig's abdomen), and baked. A similar dish, almôndega, is traditional in Portugal. 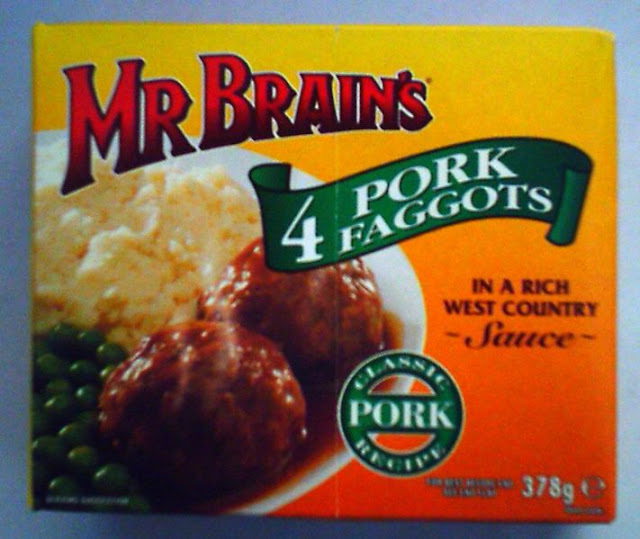 this one's a classic. it's been up for a few years, too...i'm surprised it's not more well known. fear not bunche, i too laugh every time i think of the doody family and their love of faggots.

My favorite "part" (so to speak) is the label - complete with two balls and a cock-like ribbon extolling the virtue of its "pork faggots." Tell me that wasn't intentional on SOMEBODY'S part!

Is the "pork" in that phrase an adjective or a verb?