THE GREATEST MOVIE EVER (YET TO BE) MADE? 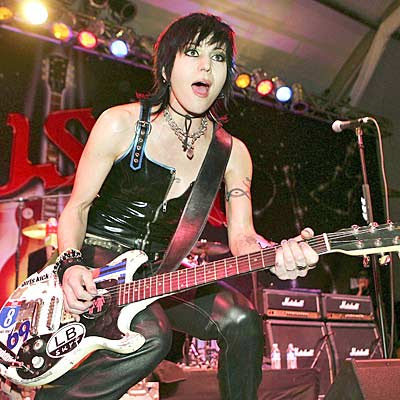 Joan Jett: the logical successor to Han Solo?
As I mentioned in a thread I started on Facebook after seeing THE RUNAWAYS last night, I want to see a movie of THE ADVENTURES OF JOAN JETT ACROSS THE UNIVERSE, in which Joan Jett is kidnapped by warrior space aliens and unwillingly dragged about deep space. During the course of the story she gets into kickass fistfights in alien-infested dive bars, gets it on with more bizarre alien women than James T. Kirk ever did, engages in space-dogfights while piloting a spaceship that's cooler than the Millennium Falcon, and, finally, proves to the entire galaxy that no species rocks harder than Terrans. You cannot tell me that wouldn't be the greatest movie ever made. Who's with me? And if any of you have the mighty Jett's contact info, please hook a brutha up. I'd like to send her the idea and see if she wants to turn it into a comic book that would then get the movie treatment.
Posted by Bunche (pop culture ronin) at Saturday, October 22, 2011

Of all things awesome, what would be most awesome!

Oh, and Amanda Conner has to do the art for the comic.