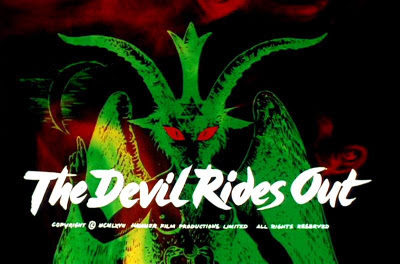 Perhaps the most Satanic title card ever, which is only appropriate for this particular movie.
Often unfairly overlooked in the post-EXORCIST era, this Hammer offering about Satanism is one of their more compelling non-series gems that fairly cries out for a modern re-discovery.

With a screenplay by Richard Matheson — author of THE INCREDIBLE SHRINKING MAN and the original I AM LEGEND, as well as several classic episodes of THE TWILIGHT ZONE — based upon the novel by British horror master Dennis Wheatley (TO THE DEVIL-A DAUGHTER and UNCHARTED SEAS, among numerous others) 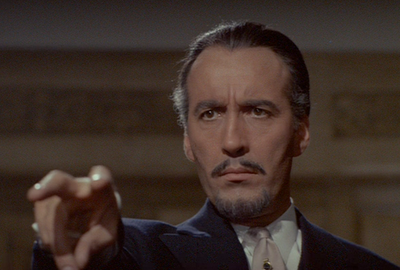 Duc Nicholas de Richeleau (Christopher Lee): taking no shit from Satan-worshiping scum.
In 1930's England, the Duc Nicholas de Richleau (Christopher Lee) and his friend Rex Van Ryn (Leon Greene) look into the sudden mysterious disappearance of their friend, young Simon Aron (Patrick Mower), who has not been seen or heard from by friends or relatives or several months, though it's known he recently and suddenly bought a large house. The Duc and Rex make their way to Simon's house and find an elegant party filled with assorted classy and exotic types in full swing, which a nervous-acting Simon explains away as "a meeting of a little astronomical society" led by the suave and sinister Mocata (Charles Gray at his slimiest, and that's really saying something), who clearly holds some sort of power over Simon. Also present is the equally on-edge Tanith Carlisle (Nike Arrighi ), whom Rex is sure he recognizes from somewhere (which she denies, though it's obvious she's lying) and who storms off when she discovers the Duc and Rex are not members of the society, and as the Duc cases the room for information it becomes apparent that the society's members are discussing matters of the occult involving planetary conjunction and such. Noting the presence of the outsiders, Mocata takes Simon aside and bids him to throw out the Duc and Rex, which he politely does, but not before the Duc begs five minutes in which to look through a telescope that's upstairs. Simon obliges but the Duc uses the time to check out the upstairs and finds a mostly empty room, decorated with parchments claimed by Simon to be "just decoration, relics," and the room's floor bears a large and ornate diagram... 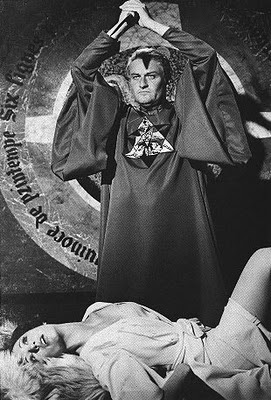 Just another day for that wacky Mocata (Charles Gray).
Hearing strange sounds, the Duc burst into a closet and discovers live chickens in a basket, thus leading him to correctly and irately deduce that Simon is now a dabbler in the black arts. With Simon being the son of a deceased dear friend, theDuc looks upon Simon as a son and he would rather see the young man dead than messing about with the occult. Though having known Simon for over ten years, the Duc never before spoke of certain aspects of his life but now that his friend's son is involved in all this devil-junk, the Duc reveals that his studies into assorted esoteric practices has given him a rather serious working knowledge of things most dark, and when the terrified Simon refuses to let the Duc and Rex stay, the Duc knocks the young man out and he and Rex haul his unconscious body out of the house and speed away in the Duc's chauffer-driven sedan. Once at the Duc's home, the Duc uses hypnosis to free Simon from the society's spell and place a "symbol of protection," a silver crucifix on a chain, about his neck, along with an order not to remove it. When Simon is asleep, the Duc informs the dubious Rex that Evil — note the capital "E" — and the powers of darkness are "a living force which can be tapped at any given moment of the night," an act proven when the still-under-hypnosis Simon practically strangles himself in an unsuccessful bid to remove the crucifix from around his neck. When the Duc's butler walks in and sees Simon choking, he removes the crucifix, after which Simon promptly escapes out the nearest window. Breaking into Simon's house in hope of finding him, the Duc and Rex instead run into an eerie spirit — that looks like nothing so much as a creepily-smiling West Indian dude in a red diaper — that materializes from the symbol on the ritual room's floor. After breaking free of its controlling gaze, the Duc realizes that Mocata is some sort of high-level, Crowley-esque Satanic adept with actual black magic powers and from that moment on embarks on a crusade to save Simon from the arch-fiend's diabolical clutches before he can be re-baptized into the the way of the Left-Hand Path, and the only key to finding Simon lies in locating the mysterious Tanith. What ensues is a battle of the so-called rational world colliding head-on with seemingly impossible things that the ancients knew only too well to be both very real and very, very deadly shit that nobody should mess with. And, not to put too fine a point on it, but Satan himself even shows up in the horned form of the Goat of Mendes (look it up), so these are not your garden variety burnout Satanists that the Duc must reckon with. These guys are no goddamned joke, and you'd better believe that. 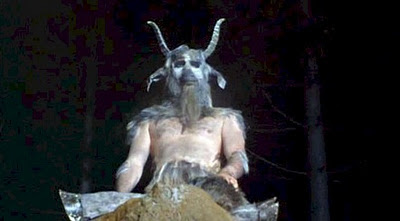 "Hi, kids! It's me, your old pal Satan! And I brought Pop Rocks!!!"
Though its thrills are comparatively low key by today's standards, THE DEVIL RIDES OUT offers very fantastical occult goings-on in a recognizably mundane setting that would fit right in with the events seen in stories like NIGHT OF THE DEMON (1957) and ROSEMARY'S BABY (1968), and the end result feels like some oddball installment of either MASTERPIECE THEATER or MYSTERY. Drenched in Britishness from head to cloven hoof, this one's definitely something to add to your Netflix queue. 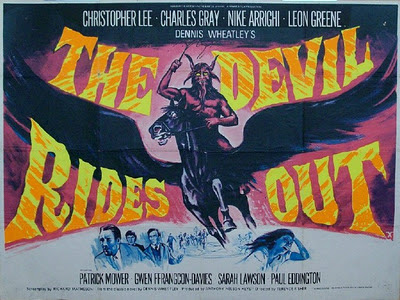