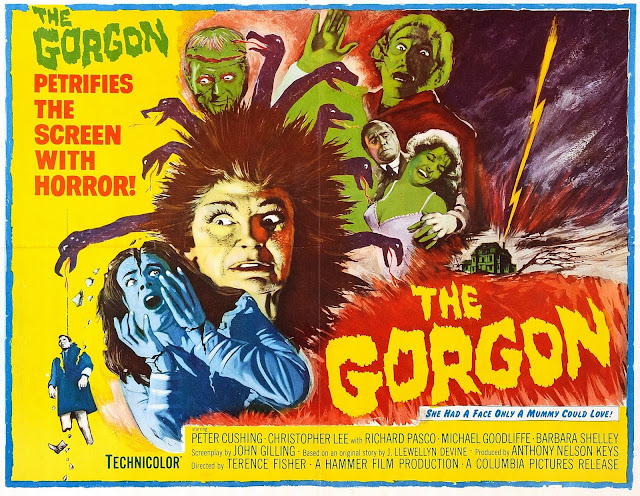 This is one of the lesser efforts from Hammer that pales in comparison to its Dracula and Frankenstein series, and that's rather a shame because it's a solid little creeper in its own right.

In the early 1900's in the remote village of Vandorf, the details in a series of very bizarre deaths are swept under the rug by the local constabulary and medical/psychiatric authorities. Local legend has it that a hideous spirit roams the land during full moons and over the course of several years it has been responsible for the inexplicable deaths of several locals. The story proper kicks into gear when a young artist is informed by his girlfriend that she's pregnant, so the artist storms off into the night to tell her father that, poor though he may be, he intends to do the right thing and marry the girl. Worried that her father will kill her lover when he finds out what's happened, the girl tears of into the night to stop her boyfriend. Unfortunately for her, she runs into something quite horrible (that the audience does not see) and when she is later found by the authorities, her body has somehow been turned to solid stone. That aspect of the case is kept from public knowledge and the girl's lover is shortly thereafter found hanged by the neck from a tree, a suicide. Using the convenient death of the young artist as a scapegoat, the authorities and the creepy head of the local mental hospital (Peter Cushing) spin the events to make it look like the artist killed the girl and then, "in an act of remorse," of himself as well. News of this obvious bullshit reaches the artist's understandably irate father, who arrives to challenge the lies and clear his son's good name, much to the annoyance of the locals who seek to drive him out. During the course of his investigation, the father learns of a local legend that claims a nearby abandoned castle is home to Megara, one of the famed Gorgon sisters from Greek mythology (the most famous of whom was Medusa, the one beheaded by the hero Perseus) whose gaze turned the beholder into solid stone, and his findings are met with apparent disbelief by the head of the mental institution, but he clearly knows more than he's letting on. 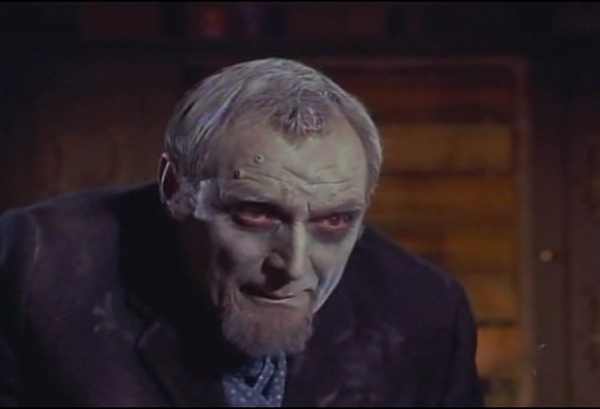 Lesson learned from this film: a slow death by being turned to solid stone would really, really suck.

While searching the castle, the father has the misfortune of running into Megara and he begins to slowly, agonizingly petrify, but not before making his way back to his lodgings where he manages to write his remaining son a three-page letter outlining his findings and suspicions. (His turned-to-stone death is falsely and ridiculously officially deemed death by heart failure, which his son quite correctly points out as bullshit because no one takes the time to write a detailed three-page letter while suffering a heart attack.) The remaining son receives the letter and arrives in town to discover the particulars of the mysterious deaths of his brother and dad, but is met with resistance from the aforementioned authorities. Meeting with the head of the mental hospital, he realizes the man knows more than he's letting on, and that the fellow is rather possessive of his beautiful assistant, who was once one of his patients (but she got better). The sparks fly between the son and the assistant, which does not sit at all well with the doctor, and things take a turn for the worse when the young man encounters the Gorgon but does not get a direct look at her face; he glimpses her reflection in a pool of water and rather than turn to stone, he is visibly aged by the terrifying experience. As he convalesces in hospital and comes to love the doctor's assistant (a love that is reciprocated), his favorite college professor and friend of his late father (Christopher Lee) arrives to see just what the fuck is going on and, taking one look at the now aged face of his student, decides to take charge of the situation, and believe me, he's badass enough to do it (which does not please the doctor or the authorities). 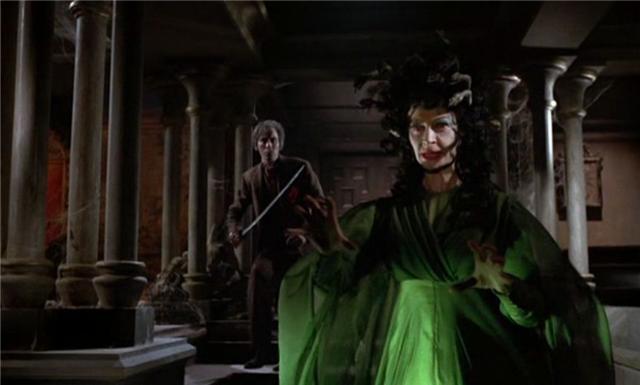 All of this snowballs into a rather predictable reveal regarding the identity of the Gorgon and culminates with her inevitable beheading, but it left me with a number of unanswered questions:
But perhaps I'm examining this too closely and nitpicking far too much. This is, after all, simply meant to be a fun little chiller and it certainly succeeds at that, so maybe I should just shut my gob. Bottom line: if you enjoy Hammer horror films and the flavor they bring to the horror-scape, you'll probably get a kick out of this. Just don't expect any of the usual gory violence and ample, heaving bosoms that the brand became justly famous for (although we do get to see Megara's detached noggin and it's pretty damned goofy-looking). 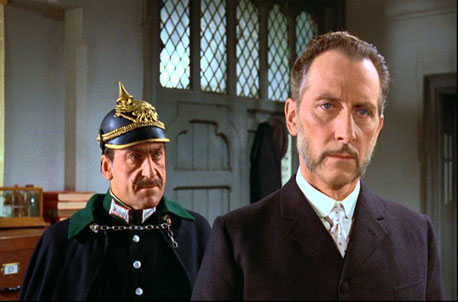 For all you DOCTOR WHO fans out there: the chief constable, the guy in the helmet, is Patrick Troughton, who would go on to be the second actor to play the Doctor. His tenure in that role lasted from 1966-1970. He was also the blind seer Phineas in the classic JASON AND THE ARGONAUTS (1963), as well as the alchemist Melanthius in SINBAD AND THE EYE OF THE TIGER (1977).
Posted by Bunche (pop culture ronin) at Thursday, October 20, 2011

A local station here in Indianapolis will be showing this movie, along with several others, all day the Sunday before Halloween.