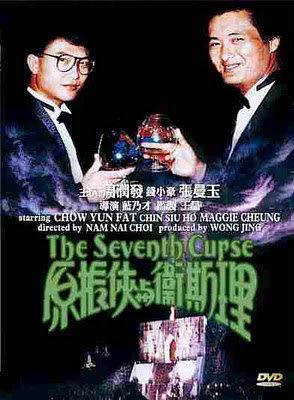 Betcha didn't expect to find a Chow Yun Fat movie on this list, didja? Believe it or not, this Category III cult fave was my first exposure to the excellence that is Chow Yun fat. Directed by Ngai Kai Lam, the same loon who gave the world the mind-bendingly gory and ultra-violent RIKI-OH (aka THE STORY OF RICKY), THE SEVENTH CURSE is an odd amalgam of its era's typical Hong Kong action flicks, RAIDERS OF THE LOST ARK-inspired death traps, martial arts mayhem, and INDIANA JONES AND THE TEMPLE OF DOOM with some broad comedic bits thrown in. At its heart, it's a straight-up horror movie, but one that had its primary flavor somewhat diluted and derailed by too many disparate elements in what I'm guessing was an attempt to have it appeal to too many audiences at once or else alleviate its considerable "darkness." 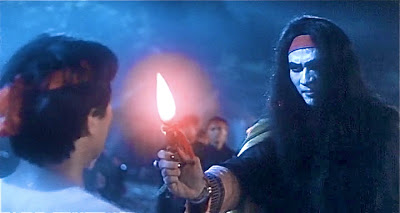 The vile sorcerer Aquala (Elvis Tsui).
While on an expedition in Thailand to find herbs with which to hopefully cure AIDS, a bespectacled police physician, Dr. Yeun (Chin Siu Ho, best known in the West for his roles in THE TAI CHI MASTER and FIST OF LEGEND), encounters "the worm tribe" and disrupts evil sorcerer Aquala's human sacrifice of a beautiful girl, "Betsy" (Sau-Lai Tsui), to the horrifying animate skeleton/shape-shifting monster "Old Ancestor." 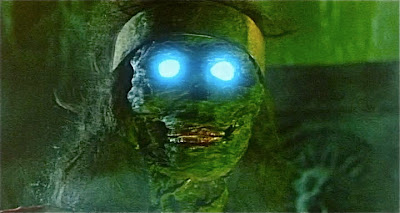 "Old Ancestor" in its less-robust form.
Aquala (Elvis Tsui) is a black magician straight out of the Mola Ram school of heavies and he wields an assortment of baleful skills, chief among which is the "little ghost," a foul creature that he produces from inside his cape that flies through the air, viciously attacks its targets, and eagerly sucks their blood. 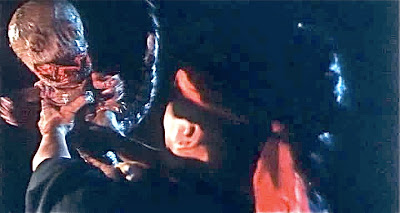 The ravenous wrath of "little ghost."
So, with that in mind, you can guess he's not at all pleased with Yuen fouling up his ritual, thus prompting him to hit the good doctor with a horrible "blood curse" that causes parts of his victim's body to agonizingly burst and spew thick red paint blood. (It's phony-looking but that only adds to the charming gross-out effect.) Though seriously injured, the doctor helps Betsy escape back to her tribe, so she kindly strips naked and cuts into one of her own breasts to supply the doctor with a cure that will hold his curse at bay for one year. 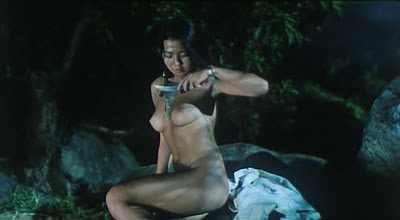 There's nothing like a little utterly gratuitous nudity.
When the year runs out, Yeun is confronted by a member of Betsy's tribe (Dick Wei) who summons him back to Thailand so he can try to effect a cure for both the doc and the girl, whose face has become disfigured in the wake of Aquala's curse. Following the advice of his occult-savvy pal, Wei Si Li, aka "Wisely" (Chow Yun Fat), Yeun returns to Thailand and accompanies the tribesman on the quest for the antidote, dogged along the way by the cute but incredibly annoying unnecessary comic relief reporter Tsai-Hung (the gorgeous Maggie Cheung). The trio encounters all kinds of nastiness, gore and sadistic violence and when the irritating reporter ends up in Aquala's clutches, the heroes aim to rescue her and the tribe's children, who have been taken so their blood can serve as the base for a magic potion, extracted from a stone crusher/juicer that squishes the kiddies into liquid goo (in a scene like something out of a child's nightmare). And after that there's still the matter of curing the doc and Betsy's curses, plus kicking Aquala's evil ass and wiping out the Old Ancestor once and for all, so you could say that the doc's dance card is pretty full.

THE SEVENTH CURSE is very lively from start to finish but it does suffer from the aforementioned elements that throw a bit of a monkey wrench into its proceedings.The comedy, mostly stemming from Maggie Cheung's reporter character, doesn't work and when it happens it transforms the film into a whole other movie entirely. The action and martial arts sequences are well done but they also seem to belong another film, especially the RAIDERS-style death traps and the blatant swipe of RAIDERS' gigantic rolling stone ball, this time with the ball being swapped out for the huge dislodged head of an ancient idol. The schizophrenic tonal shifts are all the more unfortunate because the horror story at the film's core is quite strong and would have made for an instant classic had all the needless bullshit been excised entirely. It's dark stuff of a rather Lovecraftian order and as such should have been treated with the seriousness of a heart attack.

But all of that can be overlooked when a movie is as balls-out entertaining as this one is. The hero's a bit bland but everyone else in the cast more than makes up for his relative lack of character. As monsters go, Old Ancestor's kinda neat, what with starting out as a dirty-fighting skeleton and later morphing into a cross between the Alien and the winged form of Princess Dragon Mom from INFRA MAN and all, and the little ghost is one vicious little bastard whose malevolence far outweighs the in-your-face obviousness of it being a cheaply-made prop that looks like a dime store baby doll as altered with some liquid latex and a hot glue gun by an LSD-addled member of the Manson Family. And let us not forget the presence of thirty-year-old Chow Yun at as the appropriately-named Wisely. He's the kind of character who's mellow and urbane but knows all kinds of obscure shit about the black arts for no particular reason, so he's quite handy to have around when this kind of shit is going on. And does he fight the film's Big Bad with a crucifix, holy water, counter-spells or even exorcism? Fuck that shit; that stuff's for pussies. In this narrative, using that crap's like showing up to a knife fight armed with nothing but your flaccid dick in your hand. Wisely knows better, so he shows up at the last possible minute, armed with a motherfucking missile launcher and two loads that he uses to blast Old Ancestor into showering chunks that have not a hope in hell of re-animating. The first missile blows a huge hole clean through the monster, allowing it to observe its own beating heart before it's hit by the second shot, which scatters its remaining mass like a handful of thrown jacks. And when all is said and done, Wisely isn't even impressed with himself. 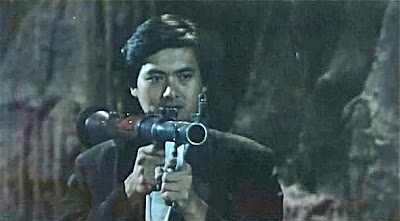 Chow Yun Fat, in an early moment of awesomeness, shows us how to properly sort out unholy creatures from the underworld.

I would have preferred a whole film about just Wisely and could have totally done without that bland-assed Dr. Yuen, but I guess a Wisely-versus-monsters flick would have been over two seconds after Wisely found out about the given threat and called a tactical thermo -nuclear strike to deal with it, after which he'd simply chill out in his study with a tumbler of Scotch as he waited or the radiation to die down. Oh, well...
Posted by Bunche (pop culture ronin) at Saturday, October 29, 2011