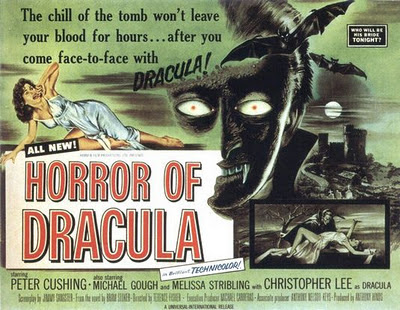 Along with THE CURSE OF FRANKENSTEIN (1957), this was one of the films that heralded Hammer Studios as a revolutionary force to be reckoned with in the post-war horror cinema landscape. Less a faithful adaptation of Bram Stoker's classic novel, DRACULA, than a mid-20th century re-jiggering of many of its elements for an audiences that might find Universal and Lugosi's take on the Count to be a tad stage-bound and genteel, HORROR OF DRACULA is the simplest iteration of the classic vampire yarn's tropes imaginable and can be seen as the template for how to tell a vampire story to a modern audience until stuff like FRIGHT NIGHT and Anne Rice happened.

Recounting the plot is pointless as it's all essentially a template that boils down to a bitter war between Dr. Van Helsing (Peter Cushing) and Count Dracula (Christopher Lee), with good inevitably triumphing over evil; something we've seen before, certainly, but it's the atmosphere, the look of the film, and the brisk telling of the tale that make this iteration of it a classic. Dracula's castle is a triumph of set design and realization, his dark-haired and very hungry bride is quite memorable, and the events that transpire once the undead suckface reaches England are just a horror fan's banquet of the basics done right. We also get the one-two punch of Lee and Cushing in career-defining roles that they would both go on to repeat several times (in some cases to diminishing returns, if truth be told), and or many Lee's Dracula is the definitive screen version of Bram Stoker's arch-vampire, and I can totally understand why. He's very tall, urbane, imposing and regal as all get out, but once his facade of aloof nobility is seen through and the vampire stands revealed, Lee's Dracula very much takes the fight to his human opponents and gets very physical indeed, seeming all the while to actually revel in being darkly, irredeemably evil. 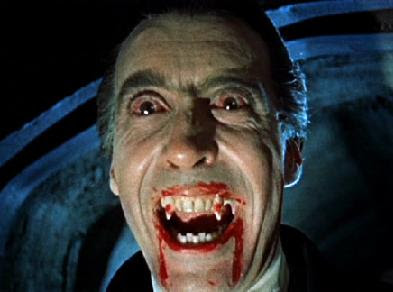 I mean, look at this fucking guy! I'd be scared of a vampire if I ran into one in real life anyway, but Lee managed to fairly radiate a palpable, primally-chilling malevolence that even later vampires that had shape-shifting makeup and animatronic technology to bolster them could not begin to approach. Lee's Dracula was a menace of the first order that needed to be expunged from the face of the earth, and Cushing's Van Helsing was just the dude to handle that thankless task. Though a man of cold, hard science and rationality, Van Helsing was smart enough to call a spade a spade when he saw one and thus he dealt with Dracula with the single-minded focus of a master surgeon eliminating a particularly stubborn cancerous growth.

HORROR OF DRACULA is absolutely worth your time if you've never seen it (and even if you already have), both as a textbook example of how this kind of thing can be done right and with no extraneous bullshit, and more importantly as a reminder that vampires are supposed to be fucking scary, not sparkly and all Emo, unlike those found in a certain tamponathon franchise whose name I will not besmirch this review with.
Posted by Bunche (pop culture ronin) at Monday, October 31, 2011

Two of the coolest, and from everything I have ever read or heard, two of the nicest human beings one could ever chance upon. Cushing and Lee rule most epically in this Hammer opus.