Yes, dear Vaulties, it's NY Comic Con time again, and here's the gallery from Day One. Nothing too earth-shattering yesterday, thanks to the first day being open mostly to the press and pros, the the fans who did attend represented in grand style. To begin: 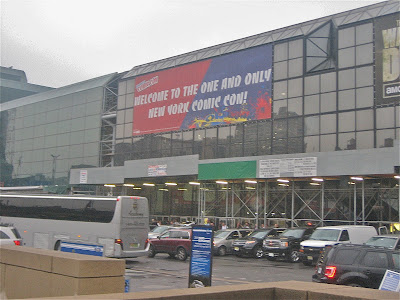 The front of the Javits Center as seen on this dreary first day. Inside, the humidity led to a sweaty tropical effect that only exacerbated the stale, onion soup-like reek of those in attendance who were apparently uninformed as to the existence of bathing, soap, and deodorant. 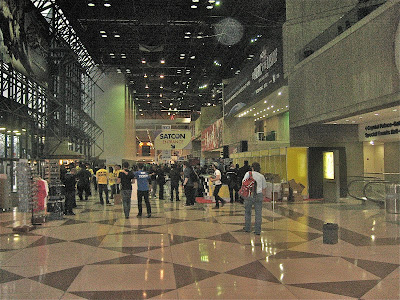 Near the ticket pickup area. Wait'll you see what this will look like on Friday, the first full day of the show... 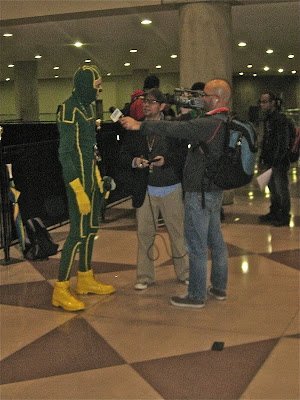 11:10 AM. While on my way to pick up my press pass, I encountered my first costumed con-goer: Kick-Ass. 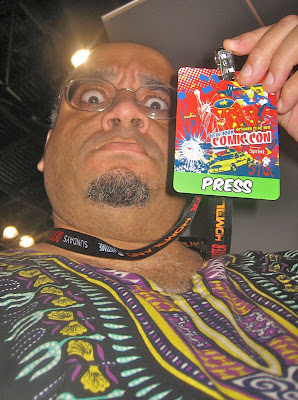 Behold! The might and majesty of the press pass. Hail! 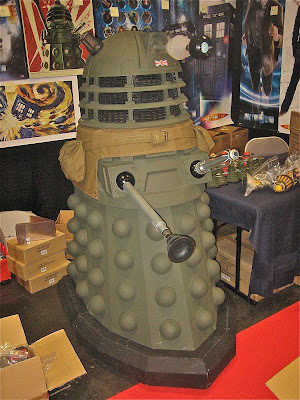 At the DOCTOR WHO store: "Winston," the WWII British soldier Dalek. 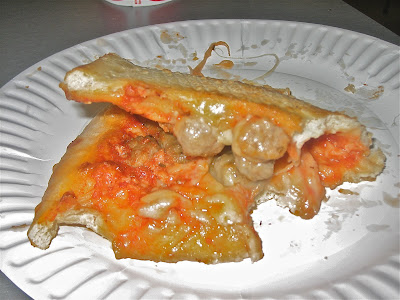 A look at the unfinished slice of what was the worst slice of pizza I have ever eaten (short of the one that gave me terrible food poisoning back in 1993). It was about 4/5 bland, oily cheese, and it would have had absolutely no flavor if not for the almost flavorless so-called sausage chunks, and it looked like the Horta had taken a shit on a paper plate. Appalling. Oh, and this cost $3.75 and extra topping would have cost me an extra three bucks. Fuck that. 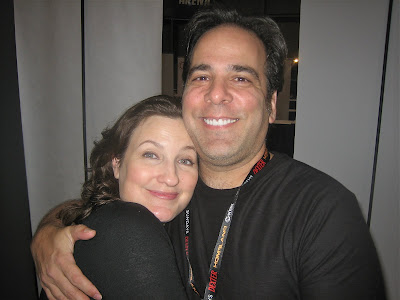 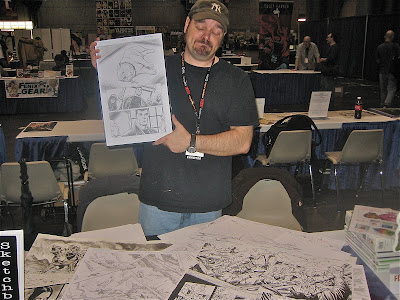 SPOILER ALERT!!! THE BOYS artist Russ Braun (also one of my very favorite drinking buddies), sadly displaying the page from issue #59 (at comics shops now) depicting the cruel discovery of the the corpse of Terror the bulldog, arguably my favorite character in the strip. When I saw Russ and the book's author, Garth Ennis, at the pub last week, I gave them a world of shit for killing the "good wee dog," to which Garth retorted, "What the hell book d'ye think ye've been readin'?" Shame and head lice upon you, Russ and Garth! Shame!!! 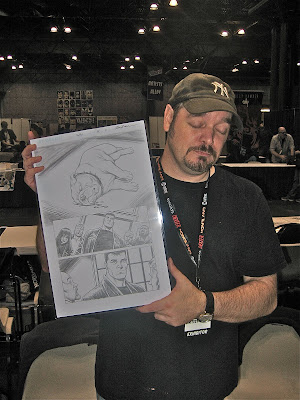 Russ again, with the page. Oh, and I now own that page. I will give dear Terror a proper place of rest within my collection. 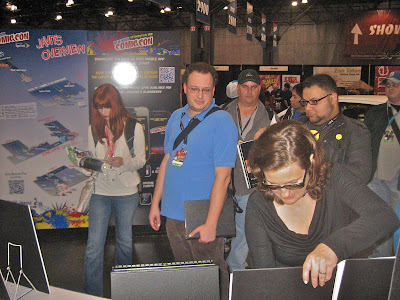 Almost two seconds after the general public was admitted, an eager line of fans forms while Amanda sets up her wares. 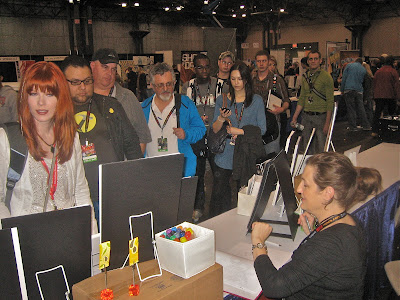 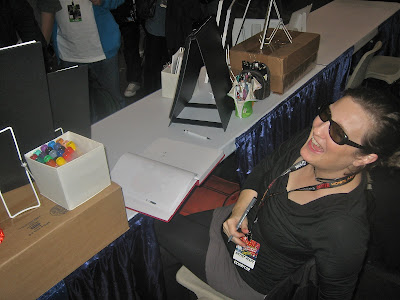 No phoniness here: Amanda totally grooving on the love from her fan contingent. 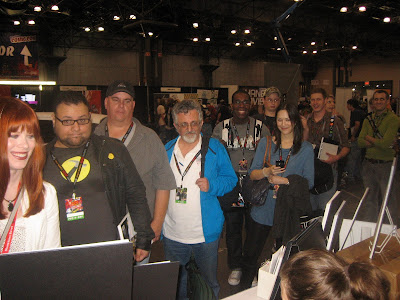 The fan contingent in question. 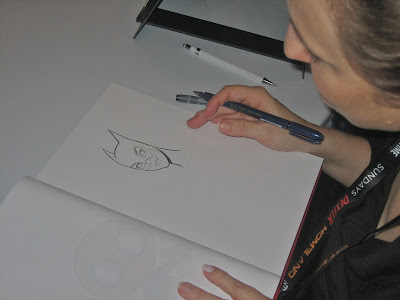 A.C. draws Batgirl for a fan. 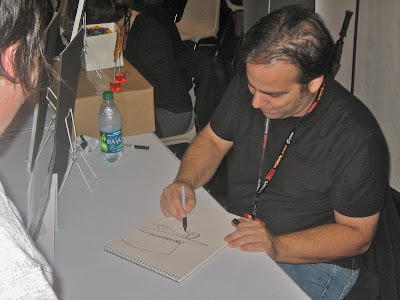 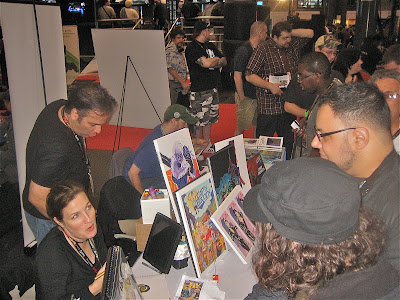 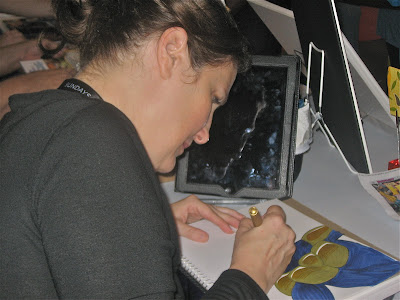 A.C. draws The Fly for a fan. (Honestly, I'm amazed that character actually has fans, but to each his own.) 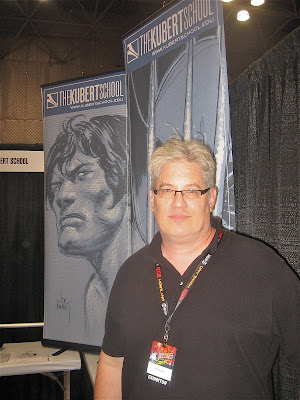 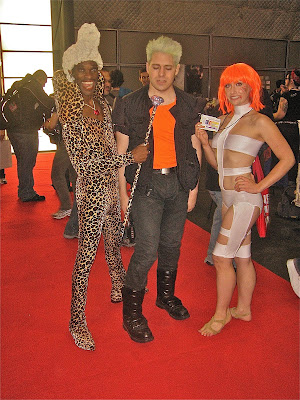 I'm certainly used to women dressed as Leeloo from THE FIFTH ELEMENT but I've never seen anyone show up as Ruby Rod. Seriously, that gets my vote as the most unexpected costume thus far, and the weekend is only just beginning. I call that a good omen! 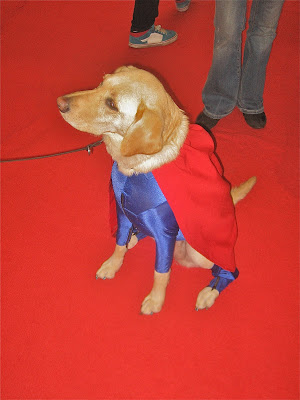 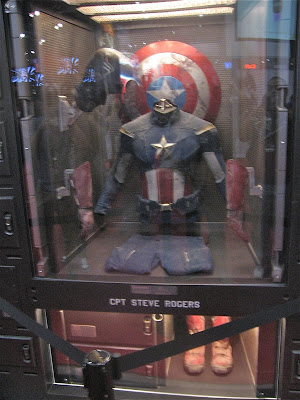 At the Marvel booth: Cap's gear. 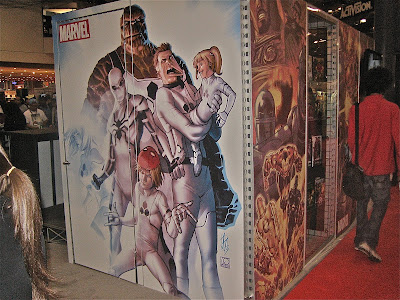 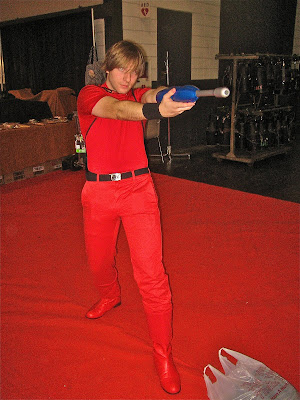 I take it back. THIS is the most unexpected costume thus far! A dead-on accurate rocking of the title character from SPACE ADVENTURE COBRA, a classic manga and anime series from the '80's that is now forgotten by all but diehard old school anime fans.

TO BE CONTINUED WITH DAY TWO.
Posted by Bunche (pop culture ronin) at Friday, October 14, 2011

There was a Ruby Rod at Dragon Con this year, I have a not great picture of him.