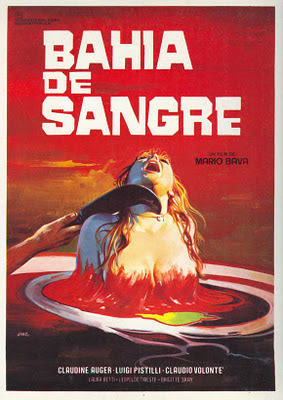 Initially released in the U.S. as CARNAGE but swiftly withdrawn due to disappointing box office and re-released as TWITCH OF THE DEATH NERVE, the title under which it played the grindhouse circuit for years, this Italian slaughterhouse of a film is of interest as the root from which the "slasher" genre as we now know it grew. The Ground Zero for that category, if you will.

The massively and needlessly convoluted plot is pretty much beside the point since the whole thing is nothing more than a blatant excuse to cram as many gory murders onto the screen as possible — something it does with unabashed gratuitousness — but it all has to do with several concerned parties vying for the inheritance of a secluded bay and the house on its attendant land. We really don't get to care about any of the characters (who can really only be described as such in the most rudimentary sense of the word), so their gruesome demises have no impact save for their graphic savagery when compared to films of its era, in which respect the movie is almost a decade ahead of its time. The work of famed director/cinematographer Mario Bava (PLANET OF THE VAMPIRES. HERCULES IN THE HAUNTED WORLD, DANGER! DIABOLIK , and many others of interest), A BAY OF BLOOD nowadays reads like a textbook "how to" for the films that would imitate this film (and aspects of John Carpenter's far superior HALLOWEEN from 1978) and come to dominate the horror genre of the 1980's and beyond, starting with FRIDAY THE 13th in 1980, and it pretty much invented the following slasher genre tropes:
With that recipe, innumerable slasher films turned the world's movie theaters into charnel houses and it all got codified right here. Yes, I know Herschel Gordon Lewis was cranking out his signature, revolutionary ultra-gory (and notoriously cheapjack and filmically crude) stomach-churners as far back as 1963's landmark BLOOD FEAST (a steaming pile if ever I saw one, despite its historical importance), but while Lewis' work was pioneering, what Bava achieved here took what Lewis hatched and refined it (somewhat) into the perfect formula for brainless cinematic fare that unapologetically knew exactly what it was, aspired to nothing other than being what it knew its audience was there for, and could be cranked out or peanuts to rake in an assload of money. And, as previously stated, this film was shamelessly imitated, but no film ripped it off to the degree that the first FRIDAY THE 13th and its endless sequels did, in many cases going so far as to outright crib some of A BAY OF BLOOD's signature killings, most notably this one from FRIDAY THE 13th PART II (1981), which stands as perhaps the prime example of the "fuck and die" trope: 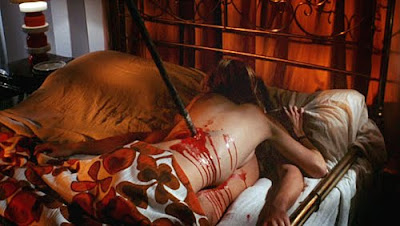 A humping couple is memorably run through with a long spear that penetrates the pair and is seen protruding through the underside of the bed, and much the same thing occurs in FRIDAY THE 13th PART II: So if you're a fan or scholar of the whole slasher phenomenon of the 1980's (and beyond), A BAY OF BLOOD is definitely worth a look for its Rosetta Stone-like status in one of the horror genre's most (often justly) maligned sub-strata. Plus, even with the passing of four decades since its initial release, it's murders are still quite vicious and genuinely shocking, my favorite being a hooked machete to the throat of a fleeing victim that features a nasty closeup of her throat being slit open. Great for the kiddies!
Posted by Bunche (pop culture ronin) at Friday, October 21, 2011