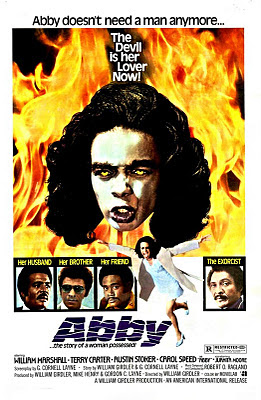 Perhaps the most infamous of the many EXORCIST ripoffs/cash-ins — and that's really saying something — this film only remains in the public consciousness due to it being the blaxpolitation genre's answer to THE EXORCIST and also for the fact that it was such a shameless ripoff that it was taken out of theaters and general distribution when the major studio makers of the film it so blatantly cribbed from threatened easily followed-through and winnable legal action that rendered it unseen in legal screenings or on legitimate home video for around thirty-five years. Well, now ABBY is available on DVD for all to experience and both the wait and the DVD transfer were not worth it. Seriously, both the movie and the print from which it was culled simply suck ass. In fact, I firmly believe that the print is the same gut-bucket, scratched and faded one that I obtained on VHS from Times Square's infamous haven for "gray market" VHS martial arts and blaxploitation flicks, the now long-gone 43rd Chamber, and that print was appalling.

Anyway, as if news of the terrible print used for the DVD were not enough to steer you away from this movie, the fact that the plot is a flagrant ripoff of THE EXORCIST as filtered through a low-budget but over-the top Richard Pryor-esque sensibility (only minus the genuine and intentional laughs) should do the trick. The main difference between this and the original is that this is the all-black version and that its protagonist and ultra-churchified adult woman rather than an apple-cheeked pubescent, and while that does allow the possessed woman to become a literally foaming-at-the-mouth slut is pretty damned funny, the movie itself as as turgid and dead in the water as a floater in your toilet bowl. To tell the truth, the main reason I included ABBY on this list is to warn you not to rent or buy it because in either case, ABBY is a world-class ripoff i every sense of the term and you will have missed nothing by not sitting through its non-existent and wholly derivative "shocks." Bottom line: Richard Pryor's famous "The Exorcist II" parody sketch from his classic 1975 SATURDAY NIGHT LIVE show is one-hundred times better than this mess, plus it's genuinely and intentionally hilarious. Watch that instead. 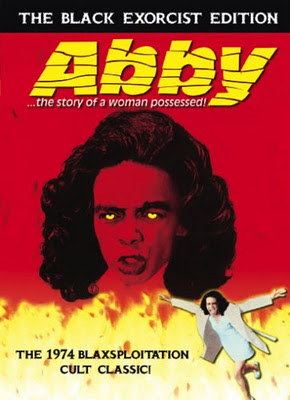 The so-called "black exorcist edition," whatever the hell that may mean (or not). Avoid this shoddy transfer like it was unshielded plutonium.
Posted by Bunche (pop culture ronin) at Tuesday, October 18, 2011