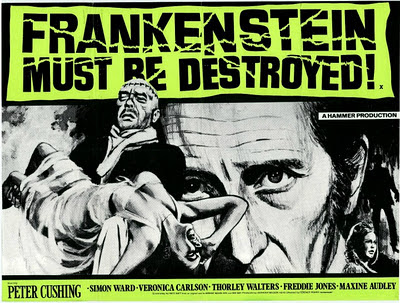 Man, do I love me some Hammer Frankenstein films. They really delivered in ways that most of the ongoing Hammer horror series didn't when it came to keeping one consistent and indelible element in their forefront, that element being Peter Cushing as the downright heartless Baron Frankenstein, perhaps the very personification of evil "I-don't-give-a-fuckness ," and this entry takes our anti-hero to vile new heights/depths of chilling depravity. The true horror of these films is less the Baron's blasphemous works of twisted science than his complete and utter detachment from humanity, and he is either oblivious or totally uncaring about the terror and misery his obsessed actions cause, all of which is portrayed by Cushng with a gaunt, emotionless demeanor that only cracks in moments of flaring anger or disdain for those he deems too stupid or "beneath" him (which is just about everybody). 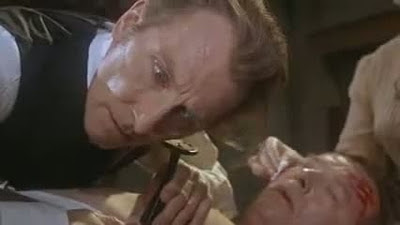 Peter Cushing as Baron Frankenstein, perhaps the most brilliant utter bastard in the annals of horror cinema.

This time around, things get underway when the Baron blithely lops off the head of a psychiatrist with a scythe and makes off back to a makeshift laboratory with the gory noggin secreted in a hatbox. When a thief who was breaking into the lab runs afoul of Frankenstein and is chased around the lab by the Baron, witnessing assorted medical horrors and coming literally face-to-face with the severed head, the would-be robber escapes and reports what he's seen to the police. 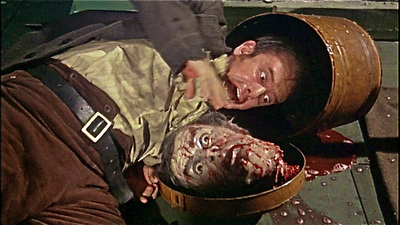 A would-be thief realizes maybe he should have taken up another line of work.
The baron hastily disposes of assorted cadavers and body parts he had laying around the place and immediately sets up shop in a boarding house run by a lovely blonde (Veronica Carlson) who is engaged to a young doctor (Simon Ward), who's been stealing cocaine from the mental hospital where he works to sell in order to support his fiancee's sick mother. Aware of the highly illegal drug-dealing going on, the Baron uses that knowledge to blackmail the couple and basically make them slaves to his every whim, even going so far as to have the boarding house owner throw out her long-term residents of good standing with no explanation in order to ensure the necessary privacy for his experiments (which needless to say does not sit well with the codgers in question). Frankenstien's goal — apparently having abandoned the soul-transference experiments from the previous film, FRANKENSTEIN CREATED WOMAN — is to cure the madness of a like-minded colleague (Freddie Jones), who just so happens to be vegetating at the asylum where the young coke-dealing doctor works. This all snowballs into a harrowing breakout from the asylum, some vintage bloody brain surgery, a transplant of said brain, and all the other gnarly stuff one has come to expect from a Hammer Frankenstein movie. Tons of colorful, lurid fun. 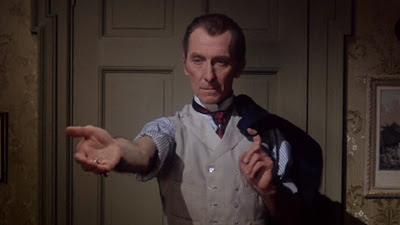 The Baron, moments before adding "rapist" to his resume.

Of particular note is just how much more nasty and ruthlessly evil the Baron has become, and since he was already one seriously sociopathic motherfucker, that's really saying something. Along with notching up his intensity and disdain for general society, the film also features an infamous sequence in which the Baron, in an effort to utterly subjugate her to his will and keep her in line, rapes the boarding house owner. It's handled about as tastefully as such a scene can be handled, but both Cushing and Carlson, along with the film's director, Terence Fisher, reportedly protested its inclusion at the behest of the distributor, who felt any form of sexual content would bolster box office. But as shocking and off-putting the scene may be to those of us who had come to accept the Baron's evil but never pictured him as stooping to something as low as rape, the sequence works and is believable in establishing him as utterly, irredeemably foul,despite his aristocratic airs and disdainful snobbery.

So I say check the film out. The final of Cushing's turns as the baron would be 1974's FRANKENSTEIN AND THE MONSTER FROM HELL, but personally I'm disappointed that Hammer's series didn't end with a film inevitably entitled WE MUST KICK FRANKENSTEIN'S ASS.
Posted by Bunche (pop culture ronin) at Thursday, October 13, 2011