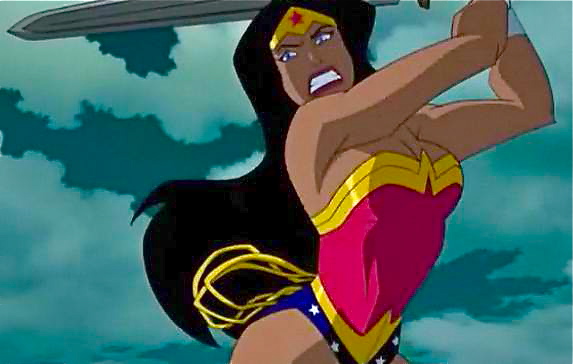 The folks over at Warner Bros. Animation have proven time and again since the now-classic BATMAN: THE ANIMATED SERIES that they not only care about making genuinely good and entertaining superhero material, they also get it thanks to many of its bigwigs being comics fans themselves. That aspect helps immeasurably when bringing Wonder Woman back to the screen because, despite her six-decades-plus history, the Amazon princess remains something of a cipher when not in the right creative hands.

Over the years Wonder Woman’s stated purpose has been that of an ambassador between her immortal Amazonian culture and “man’s world,” and as such she’s been the mouthpiece for speeches about peace and love and understanding between all races and genders and such. But while that’s all well and good, she’s seldom been given a personality and as a result it’s been rather hard to really care much about her as a character. Sure, she looks fantastic and can kick ass better than damned near anybody else in the entire DC Universe — which she certainly should be able to do after being raised as a part of a hardcore all-female warrior culture that’s had about three millennia to absolutely master the arts of combat — but at few points in her career could the fan detect much personality in which to emotionally invest. In fact, Diana has almost always come off to me as being little more than the DCU’s equivalent to the quote-spouting animatronics in Disney World’s Hall of Presidents, and I say that as a lifelong Wonder Woman supporter. Thankfully the recent efforts of writer Gail (Birds of Prey) Simone have made considerable progress in addressing this glaring oversight, but what the non-comics-reading world needs is a property that allows them access to a character whose potential has virtually never been lived up to and the upcoming Wonder Woman direct-to-DVD animated feature from Warner Brothers may go a long way to improve that state of affairs.

The animated feature’s screenplay, penned by Michael Jelenic (who worked on THE BATMAN, LEGION OF SUPER-HEROES and BATMAN: THE BRAVE AND THE BOLD television series) from a story by himself and Gail Simone, sees the umpteenth retelling/revamp of Wonder Woman’s origin, her first encounter with Col. Steve Trevor and her first adventure in “man’s world,” liberally flavored with lashings of mythology and surprisingly violent action with a Hellenistic flavor that’s pretty much what one would expect going in. But what sets this version apart from what came before is its rendering of the principals as people with personalities who don’t just spend time posing about on Paradise Island (aka Themiscyra) in Bob Mackie togas, uttering dialog that would have been laughable even in an old, dubbed Steve Reeves Hercules movie. For once I actually cared about Diana (voiced by Keri Russell) and the success of her mission, and I was very pleasantly surprised to find Steve Trevor (Nathan Fillion) stole the show by taking an instant and lusty interest in the Amazon princess, an all-too-understandable ardor that doesn’t exactly go over well with Diana’s “sisters.”

By now it’s fairly obvious that I enjoyed WONDER WOMAN, but before you rush out and pick it up for your kids there are a few things you need to be made aware of. The film is rated PG-13 with good reason as it’s considerably more violent than anything thus far issued from Warner Bros. Animation and does not shy away from depictions of ancient Greek-style warfare involving much hacking with swords, penetration with literal showers of arrows and a couple of very effective beheadings, to say nothing of Diana’s balls-out and totally brutal battle against a hulking minion of Ares. 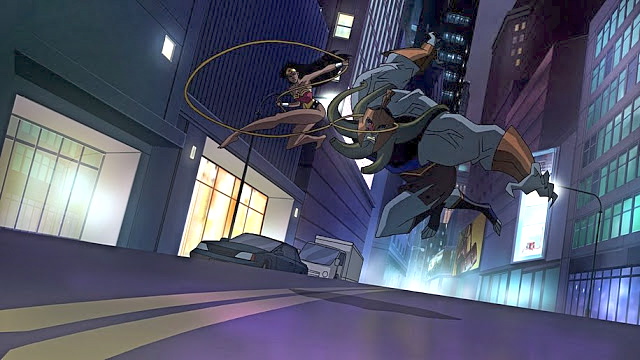 Trust me when I say that Wonder Woman has never kicked ass on film like this before!

That kind of carnage completely makes sense within the context of the story and how Wonder Woman has been handled since her mid-1980’s reboot and I, being a lifelong hardcore fan of Greek mythology, ate it up like a flaky biscuit dripping with red eye gravy, but I would not be surprised if many in the audience were taken aback by the savagery on display. This sure as hell is not the sweet Wonder Woman of the Lynda Carter era, but rather a highly-trained and skilled warrior who would flat-out kill her opponents if warranted and as such might be a bit much for the more sensitive children in the audience. There’s some bawdy dialog and veiled reference to Wonder Woman’s mother, Hippolyta, having been raped by the war god Ares and unwillingly bearing his son back in the days, but the majority of that content will sail right over the heads of under-tens. If it were up to me I would let my (theoretical) children watch it as long as I knew they could handle it and I was there to field any questions they might have, but that’s just me. You may see things differently and only you can determine what’s cool for your kids to sit through, so now you’ve been forewarned and are thus forearmed. 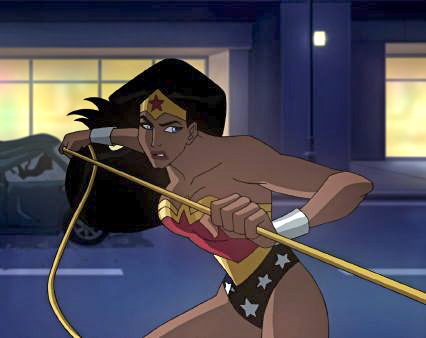 Though I very much enjoyed the film, I have to admit being saddened that its mature handling of the material automatically renders it verboten until a good deal of the children who want to see it are deemed old enough to handle it. I’ve discussed this point with several friends who have daughters who are very eager to see WONDER WOMAN, but all of these parents are wary of letting their children sit through it and as a result there is certain to be much disappointment and unhappiness in the Peanut Gallery, especially among the little girls. I want to give the film to my adorable niece, Cleo, but she’s just a month or two shy of five-years old and her folks tell me it’s probably not a good idea yet and that’s a damned shame because little girls need all the female heroes they can get. Even worse is the fact that the little girl superhero geeks out there have likely seen either the Lynda Carter version or SUPER-FRIENDS and the recent JUSTICE LEAGUE cartoons on DVDs provided by their parents, so Wonder Woman is not unknown to them and the denial of this cool new movie just seems cruel.

But, again, only you can determine what’s best for your little ones. And if you’re an adult fan of the Amazing Amazon, trust me when I say you can’t go wrong with this DVD and will most likely be hankering for more (which won’t be happening any time soon since the next Warner Bros. Animation release will be GREEN LANTERN, due out this Summer).
Posted by Bunche (pop culture ronin) at Monday, March 02, 2009

Keri Russell? Not Lucy Lawless? Felicity, not Xena? Blasphemy... or at least a seriously missed opportunity! (Then again, I recall hearing that Lucy's voice-acting left something to be desired in another animated take on wonder Woman, so I may be wrong.)

Glad to hear they didn't take the shy way out. One of the many things I appreciated about the Timm-Dini Batman series was its fairly hardcore (for a kids' cartoon) take on violence, insanity and kinky sexual undertones. It seems the lesson - "Don't talk down to the audience or the source material" - seems to have taken hold. Good!