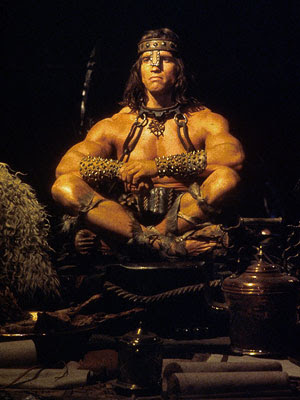 Scene from CONAN THE BARBARIAN (1981)

CHIEF HYRKANIAN WARLORD (to a lesser warlord): What is best in life?

LESSER WARLORD(proudly): A swift horse, the falcon at your breast, and the wind in your hair.

CHIEF HYRKANIAN WARLORD: Wrong! Conan! What is best in life?

CONAN THE BARBARIAN: To crush your enemies, to see them driven before you and to hear the lamentation of their women!

Last night, much to my horror, I witnessed California governor Arnold Schwarzenegger - aka Conan - address the throng at the Republican national Convention with perhaps the most shamelessly jingoistic and blatantly contrived “speech” that I have ever witnessed. Putting aside my own political leanings and looking at it for what it was, Ah-Nuld's oration came off exactly like the badly written Hollywood big-budget schmaltz that one would expect.

As we all know, Ah-Nuld came to this country as an immigrant who didn't speak the dominant language and ascended from being a greasy steroid-abusing homoerotic icon to an unlikely Hollywood action movie cash cow and inevitably a member of one of the nation's most politically powerful families. What you may not know is that Conan eventually usurped the throne of fabled Aquilonia and ruled as king until his death. I bring up this bit of fictional history because while watching the speech all I could see was King Conan addressing his adoring public, a public that feasted on his every utterance. So go to http://www.newsday.com/news/local/newyork/nyc-arnoldspeech,
0,6593098.story?coll=ny-nynews-headlines
for the actual, unaltered transcript of Ah-Nuld's address; simultaneously artificial, jingoistic, replete with movie references and bad jokes, horrifying and utterly nauseating in all respects. If you can't believe what you are reading, I have the whole thing on videotape and will happily show it to you upon request. Halfway through, what with the furor of the crowd and whatnot, I could only think of footage of Hitler at the Nuremberg rallies. Read it, and don't forget to supply the accent.
Posted by Bunche (pop culture ronin) at Wednesday, September 01, 2004 No comments: