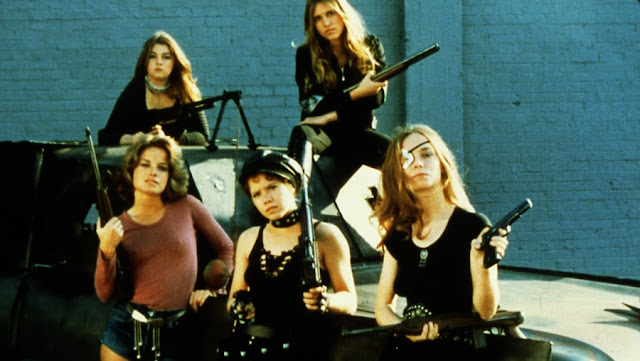 A feminist masterpiece, utterly subbed the the so-called "Academy."

My skipping of this year's Oscars show is in bitter memory of the shameful fact that Jack Hill's epochal SWITCHBLADE SISTERS wasn't even considered for the Best Picture award in 1975, which only serves to further point out just how meaningless the Oscars are.
Posted by Bunche (pop culture ronin) at Sunday, February 09, 2020 No comments: 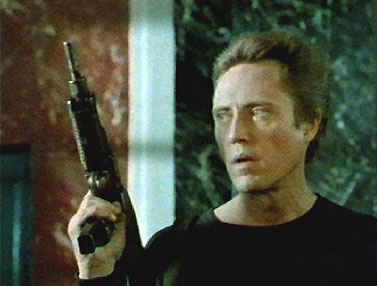 When the star looks like he wishes he were in a Golan-Globus movie instead.

Last night's lull-me-to-sleep movie was McBAIN (1991), featuring a zombified Christopher Walken as a Viet Nam vet who gets called in to honor a debt that requires him to lead ragtag revolutionaries in taking down a stereotypical Columbian dictator/drug trafficker. It was so by-the-numbers and stupid that I ended up watching the whole thing, marveling at a movie of its wannabe Golan-Globus ilk being released as late as 1991. It comes off exactly like a bunch of little boys (and the neighborhood's girl who got in on this sort of thing) playing soldier with toy weapons and a few pets thrown into the mix, only enacted by grownups, and the effect is unintentionally (?) hilarious.

The film opens in Viet Nam in 1973 on the day when the conflict is officially declared over, where we see our hero as a P.O.W. forced to fight to the death against a hulking enemy bruiser who's armed with a big-ass knife and low-budget martial arts skills. By comparison, Walken looks like a dried-up scarecrow and basically gets his ass mercilessly kicked. That is, until a bunch of hardcore U.S. soldiers show up in a Huey, blow the living shit out of the P.O.W. camp and liberate the prisoners, which is when McBain — whose first name is Bobby, so we get an action hero named Bobby — meets Santos, the Columbian-born U.S. soldier to whom he now owes a life debt. Eighteen years later,  Santos is killed during a botched coup attempt, so his sister (Maria Conchita Alonso — remember her?) rides out of her shot-in-the-Phillipines Columbian village on a donkey and somehow tracks McBain to NYC, where he works on the Brooklyn Bridge as an arc welder. McBain witnessed Santos' death on the news, so he's on board to help the man's sister but first he rounds up a group of U.S. vets to form an even cheesier variant on the A-Team and then we're off to endless firefights and shots of Columbian peasants screaming "Libertad!" while waving rifles in the air. 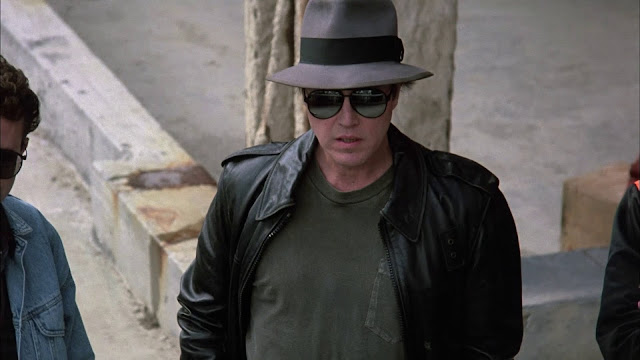 Bear in mind that there was no prior setup whatsoever to lead us to believe McBain — excuse me..."Bobby" — was in any way a highly-skilled commando with the respect and unquestioning loyalty of equally-skilled former soldiers, one of whom (Michael Ironside) is now a multi-gazillionaire whose cash and apparent deep ties to the U.S. government are totally at Bobby's disposal, which is convenient since Bobby and his faux A-Team require a budget of $10 million for weapons and a light aircraft, plus air support from a U.S. fighter pilot acting as a military supply plane's escort in Columbia. (The guy basically ditches his own assignment because McBain mentions he knew the guy's father's division during 'Nam, and brings his fully-loaded fighter jet with him.) The relative ease with which this crew accomplishes the takeover is childlike in its narrative simplicity and grasp of the concept of "unsanctioned international incident" and it's a fucking hoot.

Much like the rest of the movie, the film's tag line of "It takes a killer to stop the killing" makes no sense whatsoever. When we meet him, Bobby's getting his ass handed to him by some Viet Cong thug and he requires the army to save his scrawny ass. Skip ahead by eighteen years and with no explanation whatsoever he's suddenly effortlessly badassed and connected. WAHAAAA??? Ludicrous, but very entertaining.

Oh, and according to the IMDB, the release of this movie led the writers of THE SIMPSONS to refer to their McBain character only as Rainier Wolfcastle for some time in order to avoid confusion with this film. When what they felt was enough time had passed, the name "McBain" returned. 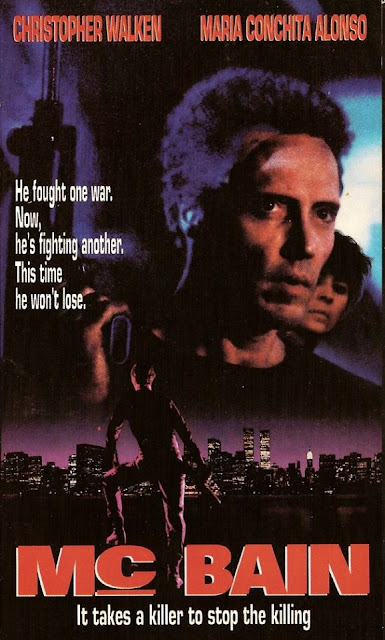 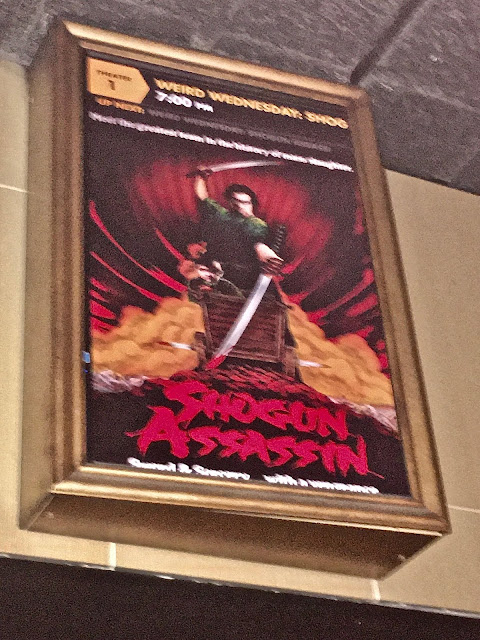 Saw the screening of SHOGUN ASSASSIN at the Alamo and, as I had been afraid might be the case, it was the same mangled veteran-of-grindhouses print that I saw over a decade ago during a Subway Cinema classic martial arts film festival. The print was scratched-up and random seconds were missing here and there, which haphazardly cut off parts of the dialogue and caused some of the important exposition to be lost. The hero's brief underwater battle with the female ninja was entirely missing and — most unforgivable of all — the legendary gout of blood that geysers from the slashed neck of the leader of the Masters of Death immediately after he delivers his poetic/hilarious dying speech about "how the sound of wailing winter winds" is heard when such a magnificent cut is administered? Completely missing due to it having been excised from the print during its long years of service in sleazy 24-hour theaters that once dominated areas like the Deuce.
When I saw the film at that Subway Cinema screening a decade back, the showrunners were aware of the print's horrendous quality, as it was allegedly the only extant 35mm print that could be found, so the show's host told the audience up front what they were in for. (The disappointed hew and cry of the packed-to-capacity audience when the aforementioned neck geyser was missing was one of the greatest displays of simultaneous audience sadness and ire that I have ever witnessed.) The showrunners for tonight's screening were apparently unaware of just how dilapidated this evening's print was, so I'm not going to hold their not informing the audience ahead of time against them. 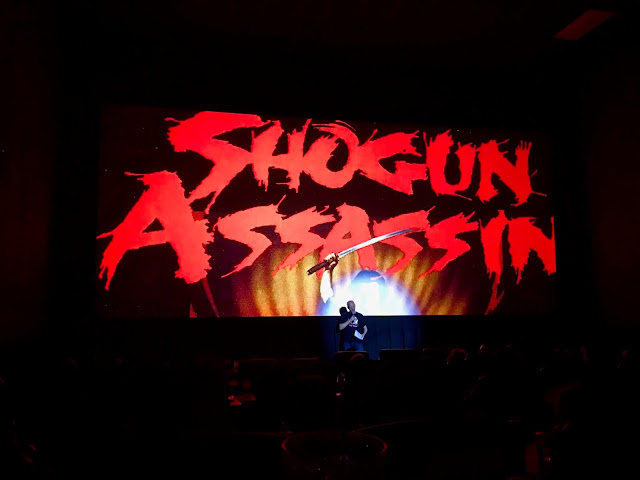 The damaged print is introduced to an unsuspecting audience.
BOTTOM LINE: SHOGUN ASSASSIN is one of my all-time favorites and it's a hell of a lot of fun, but it's very much a visual piece that needs to be see in pristine condition in order to be properly experienced. Thus I suggest that you avoid 35mm screenings of it, should you see it listed, if there truly is only this one damaged print still available for projection. Criterion has issued it in a gorgeous edition on DVD and BluRay, so go with that instead. Or, better yet, just watch the unedited, full-length, subtitled Japanese originals that Criterion issued as a boxed set (which includes SHOGUN ASSASSIN while simultaneously rendering it superfluous).
Posted by Bunche (pop culture ronin) at Wednesday, February 05, 2020 No comments: 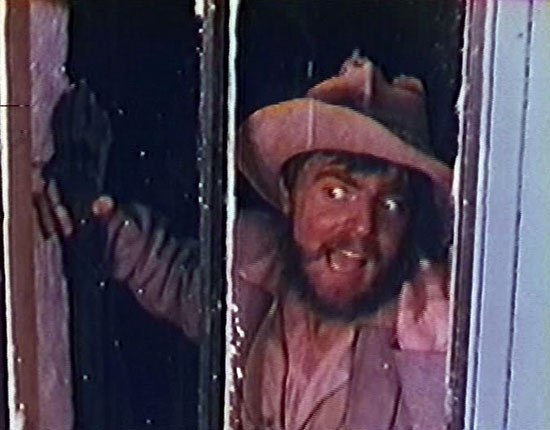 Ah, just after 1am on a Friday night in Park Slope. There's a drunk outside my building screaming "I WANT TO FUCK YOU...IN THE BUTTHOLE!!! Look... I have been... TRAINING SCIENTIFICALLY!!!"
Posted by Bunche (pop culture ronin) at Saturday, February 01, 2020 1 comment: