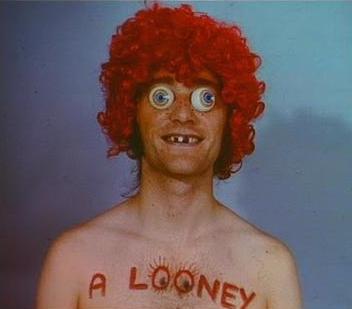 Today's "SPOT THE LOONEY: NY SUBWAY EDITION" kicked off when a loud and belligerent black dude entered the Brooklyn-bound 5 train.
Looney: RADIATION! Microwaves make radiation, muthafukkas!!! Just like the phones! RADIATION!!! (sits down, rhythmically pounds seat for emphasis, pauses briefly before resuming) I'm gonna get me a white girl! (pause) I'm gonna get me a CHINESE girl!!! (pause) But I don't know about the Spanish girls...I FUCKIN' HATE SPICS!!! Fuckin' HATE those muthafukkas!!!
(At this point, the stunned silence was broken by much commentary from the numerous people of Spanish-speaking descent who were passengers, all of whom found the sudden turn toward ethnic hatred to be extremely amusing.)
Latina subway rider: This nigga must be for Trump! (laughter from surrounding riders)
Looney (not missing a beat): Yeah, I'm for Trump! That muthafukka has ALL the money! He's got the right idea! Mexicans have ALL the jobs! Fuckin' Puerto Ricans!!! Ruinin' the fuckin' country! (pause) RADIATION!!! Microwave make radiation! GO BACK TO SCHOOL, MUTHAFUKKAS!!!
(His ranting continued along those lines for two more stops, at which point I disembarked.)
Posted by Bunche (pop culture ronin) at Friday, January 29, 2016 1 comment:

What's the new year without Charles Bronson killing an entire neighborhood in the immortal DEATH WISH 3 (1985)?