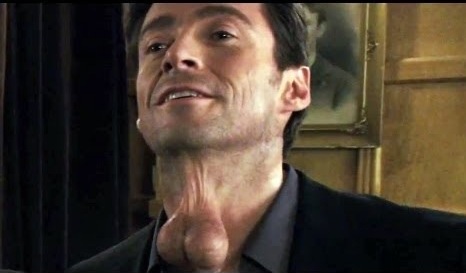 I have often said there is no greater cinematic failure than an unfunny comedy. Think about it for a minute. Virtually any other movie genre can at least yield unintentional laughs and therefore some semblance of enjoyment, while a comedy that does not succeed at its very reason for existing — specifically to be funny and make its audience laugh — provides the viewer with absolutely fuck all and just lays there on the screen like three-day-old roadkill. The last movie I saw that made me feel like I'd been watching ninety solid minutes of roadkill was the execrable THE LOVE GURU, and now I can say that MOVIE 43 provided much the same experience, only with the level of tastelessness cranked up to 11 (for a mainstream release, that is).

If you know me at all, either in the real world or from reading my blog's ramblings, it's readily apparent that I have nothing whatsoever against bad taste, profanity, general offensiveness, and the aggressively stupid when it comes to humor. Fuck, I positively revel in such stuff! So how could I not be interested in seeing a movie that purportedly harked back to the now lost comedic niche once filled by such films as THE GROOVE TUBE, TUNNELVISION, THE KENTUCKY FRIED MOVIE, and AMAZON WOMEN ON THE MOON? And the other factors that lured me into seeing MOVIE 43 were that it was not screened for critics — never a good sign — though a handful of critics did see it in advance and spurned it like it was a rabid dog, and when the movie opened, the critics were all over it like ugly on a gorilla, almost universally condemning it. (I saw exactly one positive review.) Being an out loud and proud (though cultured) vulgarian, I opted to ignore the critics and see the film for myself, with my friend Lexi and her high school-age brother, Charlie (whom I proudly consider to be my nephew).

We braved the frigid weather and rendezvoused at Park Slope's infamously irritating Pavilion theater, a cheesy multiplex located across from Prospect Park and staffed with an assortment of ghetto-acting louts. Two of the auditoriums did not have heat (which at least was considerately posted at the box office) and the general interior of the place was rather chilly, but the auditorium for MOVIE 43 at least was warm. Charlie arrived before Lexi and walked in to meet me in the lobby, where he walked past the sleazy ticket-taker, who for all we knew could have been just some lout who'd wandered into the theater from the street. My ticket had been torn when I entered but Charlie had not yet purchased his, so I told him to hit the box office. Hearing that exchange, the dodgy ticket-taker asked if Charlie was with me and when I answered in the affirmative, he told Charlie to just walk in and he would meet us in the theater to get the money. Thinking the film was such a mega-bomb that it didn't matter if Charlie paid or not, I figured the guy was just letting him in because why the fuck not and his comment about the money being a feeble attempt at humor, so we thanked him and went into what was hands down the darkest auditorium I have ever been in. True to his word, the ticket guy followed us upstairs and immediately demanded the full $12.00 ticket price from Charlie. As Charlie fished in his pockets for the cash, I looked at the ticket guy and said "Twelve bucks? Dude, I just paid $8.50 for mine!" He quickly shot back with "Oh, shit! Matinee! I forgot it's the matinee! Just gimme eight bucks. I hate change! Just tryin' ta make some money, man." So the guy was obviously short on cash and decided to deny the place of his employ the price of a movie ticket so he could line his own pockets. When Lexi arrived and took her seat, I looked around and noted that including the three of us, there were exactly ten other people in the whole auditorium. I wonder how many of them also got hit up for cash by the ticket-scamming usher?

In other words, the perfect bit of shabbiness to set the mood for the movie that immediately followed.

Anyway, MOVIE 43 is a series of "shock comedy" shorts, loosely connected by a framing narrative in which a desperate and clearly insane screenwriter (Dennis Quaid) attempts to pitch his screenplay to a Hollywood studio producer (Greg Kinnear). The sketches are meant to be seen as segments from the mad writer's script as read by the writer to the stunned producer, none of which really have anything to do with an over-arcing theme (despite the writer's attempts to convince us otherwise), with each providing a central offensive and/or gross concept upon which the bit hinges. More often than not, once the gag is made clear, that's pretty much it, even if the gag elicits an initial giggle or titter, and one finds themselves counting the time until that bit ends and another begins, with the new bit hopefully being better than what preceded it. Unfortunately, around 98% of the material would not pass muster on even the lamest of sketch shows, so what we have here are bits with varying degrees of unfunniness and no solid gems. At times it felt as though the various talent involved — actors (several of whom are A-listers), writers, directors — figured that touching on taboo subjects, profanity, nudity, and violence would automatically add up to comedy gold, but instead those efforts have spun straw. You may laugh once or twice but for the most part the general reaction as the movie's foul scenarios escalate is a skeeved-out "Oh, god!!!" after which the shock wears off and is swiftly rendered tedious and punchline-free.

Of the material trotted out during the flick's ninety-seven-minute running time, I admit to being entertained by the ongoing escalation of the screenwriter's crazed pitching, a situation that results in gunpoint extortion of a paycheck (and fellatio that happens offscreen) and other insanity before the actual writers simply lose interest and cop out by having the actors (who drop character) and film crew (who are now plainly visible) simply say "Fuck this. Let's just run the last short." As for the shorts themselves, none of the full-length offerings were fully satisfying and several went on too long for no good reason, but the ones that stuck with me for various small reasons include:
There's a lot of other shit to be had but none of it is funny, and when the credits roll we are "treated" to supposedly-funny outtakes that are not at all amusing, presumably included to pad out the running time. The fact that a film containing so much vulgarity and dumber-than-dirt "guy humor" did not win my favor says a lot, so I simply cannot recommend MOVIE 43, not even when it ends up on cable. It's an almost-total waste of time and I can honestly say I regret not seeing HANSEL AND GRETEL: WITCH HUNTERS instead, which Lexi wanted to do but I, like an idiot, instead opted for the movie that looked like it would be gone by the end of the week. Now I'm curious to see if it even makes it through even a mere seven days. When the inevitable lists of 2013's worst films hits, I guarantee you that MOVIE 43 will be quite deservedly at the head of the pack.

Lastly, the whole experience was quite eloquently summed up by Lexi, who, after we'd all said our goodbyes, texted me with a simple comment: "I want to wash my brain." 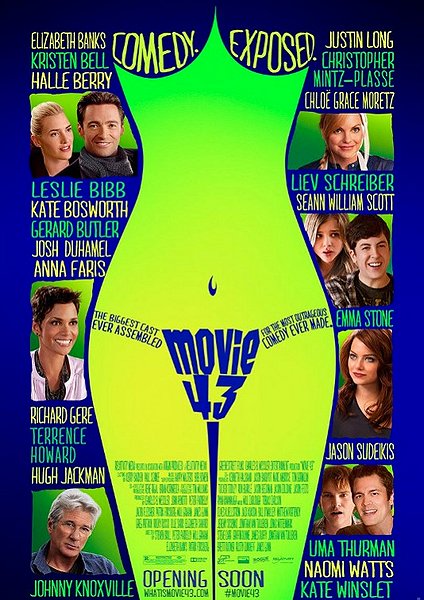 Poster from the theatrical release.
Posted by Bunche (pop culture ronin) at Saturday, January 26, 2013 No comments:

Must be one hell of an installment of REX MORGAN, M.D. in that paper.