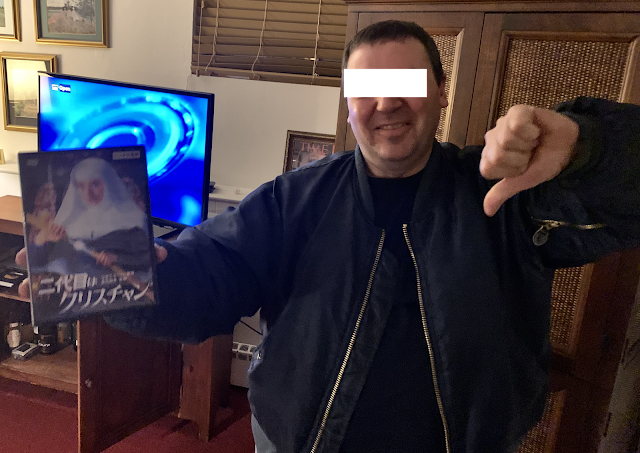 In my mother's TV room: my buddy Gazelli, after enduring the exceedingly disappointing Etsuko Shihomi flick, THE SECOND IS A CHRISTIAN (1985) with me.

Etsuko Shihomi was the powerhouse karate badass who had supporting memorable roles in THE STREET FIGHTER and THE STREET FIGHTER'S LAST REVENGE (both 1974), and well-deserved starring roles in DRAGON PRINCESS (1976) and a trio of SISTER STREET FIGHTER movies (1974-1976), and those of us who enjoy sleazy, ultra-violent '70's Japanese karate actioners adored her in such fare. She was as much of a hardcore badass as any of the men she starred opposite — and when you can say that about someone who was a regular in Sonny Chiba bone-breakers, that's REALLY saying something — so why waste a performer of her shattering skills on a weaker-than-weak romantic comedy?

THE SECOND IS A CHRISTIAN seeks to lure in her fans with its promotional image's juxtaposition of Shiomi looking as fierce as ever while wielding a sword, only decked out in a nun's gear. The alleged comedy comes from her being the heir to a Yakuza family who got out of the life by finding religion, but considering who's playing the character, one could be forgiven for thinking that she would eventually bust out her legendary ass-kicking acumen. That doesn't happen until the ass end of the final reel, by which point we have endured tons or unfunny comedy and a romance plot that is completely un-involving, and when she does finally break out a sword, she pretty much fumbles her way through the encounters in which it is deployed. No skilled badass this time around, but instead a milquetoast in a habit.
Joe and I prefaced this with a screening of the vastly superior 13 STEPS OF MAKI: THE YOUNG ARISTOCRATS (1975), which is a fun (and virtually plotless) exercise in wall-to-wall karate/exploitation action set against an escalating war of asshole factions, and the comparison between the two Shihomi films could not be more drastic. Anyway, take my word for it and skip THE SECOND IS A CHRISTIAN, should it come your way. 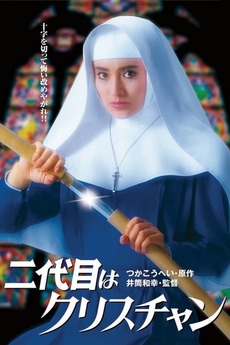 Image from the film's DVD release. A major, major letdown from one of my favorite action stars.
Posted by Bunche (pop culture ronin) at Saturday, November 27, 2021 No comments: 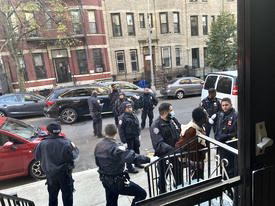 I was asleep until about 30 minutes ago, recovering from yesterday's dialysis treatment, when a clearly unhinged black dude began ranting on the sidewalk in front of my building. In the wake of yesterday's Kyle Rittenhouse verdict, I expected those who are off their meds to come out of the woodwork, but not right outside.
When I woke up he was in full tilt, with his overall gist being that his family brought him here from Africa so he could work hard, but it all amounts to nothing when a white kid can shoot people on the street with zero consequences. He then alternated between screaming about how "we're expected to kiss the white woman's ass while all she does is lie to us," complaints about the NYPD constantly abusing him, mention of his mother, noting "you all accuse me of being bipolar," and just an ongoing litany that left no doubt that the guy was not well.
My down the hall neighbor of course went downstairs with her camera and photographed the scene, where the incident was responded to by multiple cops. They wisely opted to let the guy wear himself out while a soft-voiced female officer attempted to calm him down. After a little more than a half hour of histrionics, they managed to coax him into a car by promising to contact "his people," and they only just cleared the area.
Posted by Bunche (pop culture ronin) at Saturday, November 20, 2021 No comments: 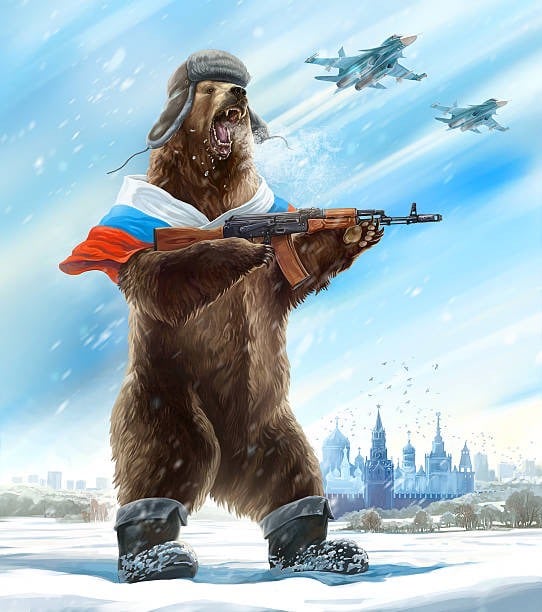 Today’s car service driver to my first dialysis treatment of the week showed up twenty minutes before my scheduled pickup, and what a character the guy was.
The driver was a huge Russian bear of a man, somewhere around his late 60’s, and dressed in bright red sweats and a red hoodie. That ensemble was topped with a red baseball cap emblazoned with a Soviet military crest on the forehead and huge white letters reading “CCCP” on the bill, with “USSR” on the back. So, I was being driven by an old school Sov super-patriot, that much was already apparent, but the hilarious icing on this cake was when his cell phone went off. It loudly and proudly played some ultra-militaristic instrumental anthem of the sort that conjured up mental images of marching troops in propaganda reels. I had to fight not to laugh.
Posted by Bunche (pop culture ronin) at Monday, November 01, 2021 No comments: