THE END OF AN ERA 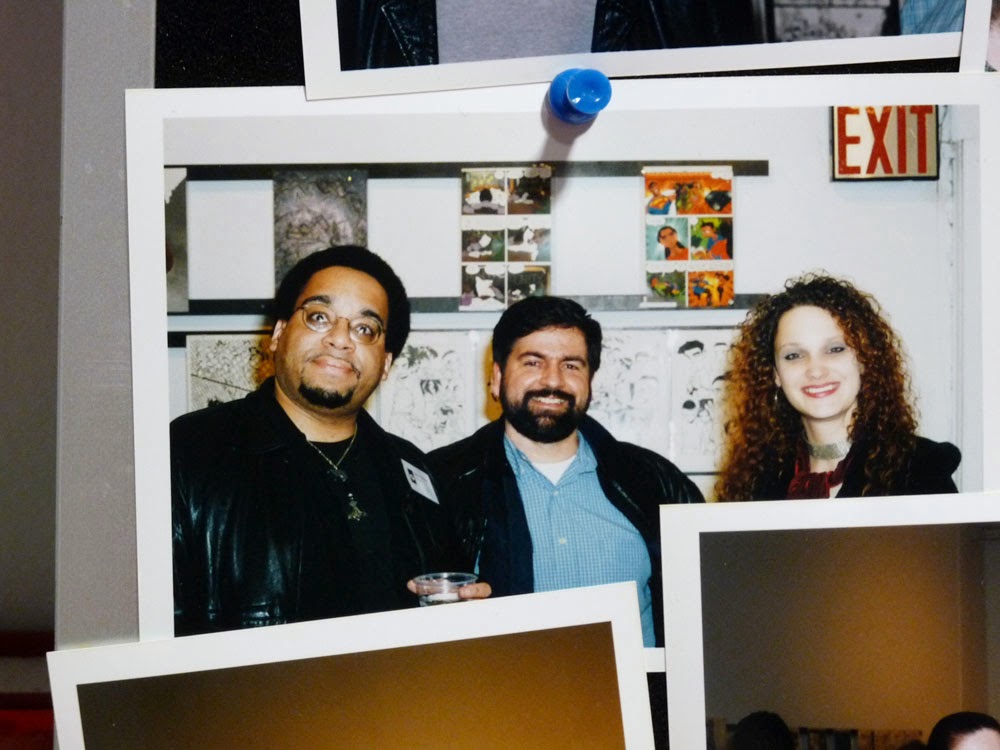 Today marks the closing of DC Comics' Manhattan offices as the company moves to Burbank, California, a former colleague (now a dear friend and drinking buddy) from my days as a comics biz grunt attended the closing. With some minor edits (made to conceal the person's identity) here's the email I received with the photo seen above:

Was just up at DC for the closing of the offices toast (a dixie cup with a half mouthful of champagne), which was handled about as half ass-edly as you'd expect. But I spotted this pic on the remembrance board and thought you'd like to know you were represented.

End of an era, and lots of good memories for me to go along with the bad - the lack of respect and flat out betrayal I experienced in this biz. But the offices, especially pre-9/11, when you could pop in and out at will, were always a great place to hang out, shoot the shit with friends in editorial or whoever was in town from abroad. Anyway, you missed nothing today, but thought you'd like to know.

Indeed, I do appreciate being made aware of this. After the royal and very much politically-motivated screwing-over I received during my years years in Vertigo (and to a much lesser extent as an artist in the production department by a closeted asshole of a direct superior, before I made the leap to editorial), I long-ago accepted that my contributions to the company would be swept away and forgotten, a revising or whiting-out of of history facilitated by some of the very petty and childish power-wielders who were my superiors at the time, despite the noted fact that my award-winning rise from production to an associate editorial position was, up to that time, the swiftest in the company's history. But let us not speak ill of the "dead." It's nice to know that though a footnote I may be, my existence within the home of Superman, Batman, and Wonder Woman has not been totally expunged from the company's memory.
Posted by Bunche (pop culture ronin) at Friday, April 10, 2015 No comments: 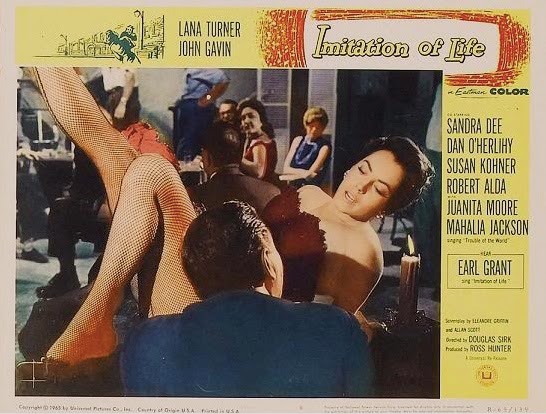 Just got back from the Film Forum's screening of IMITATION OF LIFE (1959), a film that has fascinated me since I first encountered it in the great Esther Newton's infamous "American Society On Film" class during my SUNY at Purchase college days. It's a re-imagining of a 1934 chick flick/"weepie" about two mothers, one black and one white, and their daughters, who all come together under one roof as a blended family and contend with issues of class, race, and family dysfunction, and the 1959 version is one of the all-time classic examples of a textbook emotionally-manipulative Hollywood soaper. Its examination of how American society of its era made true equality/harmony between blacks and whites in general unlikely at best hauls out the longstanding tropes of the martyred, saintly older black woman who's the emotional backbone and real strength of the family (to both black and white factions), and the so-called tragic mulatto whose case of self-loathing is invariably more compelling than the upper-class travails of the white protagonists. Sarah Jane (Susan Kohner), surrounded by white masks. Subtle it is not...

I won't spoil the plot's details but the 1959 IMITATION OF LIFE's portrait of Sarah Jane (Susan Kohner), the angry, self-loathing light-skinned daughter of a black father who's described as "almost white," is far more compelling than the rote rags-to-riches showbiz rise of its white main character (Lana Turner) and how her success leads her to unintentionally neglect her blossoming 16-year-old (Sandra Dee). The actress's storyline is not bad by any means, but it was something that was already seen numerous times prior to the film's release, however it's essential to the overall narrative by providing the perfect background against which to contrast the entwined lives of Sarah Jane and her mother (Juanita Moore) who works as the actress's live-in maid and bosom companion whose support and caring for the actress's daughter frees the actress to pursue stage gigs. Sarah Jane's rejection of her dusky heritage and her shattering desire to pass for white from an early age form the true emotional core of the story and Susan Kohner's Oscar-nominated performance renders the character's arc as nothing less than painful and heartbreaking. In short, if you have not seen this film, seek it out for Kohner's arc. 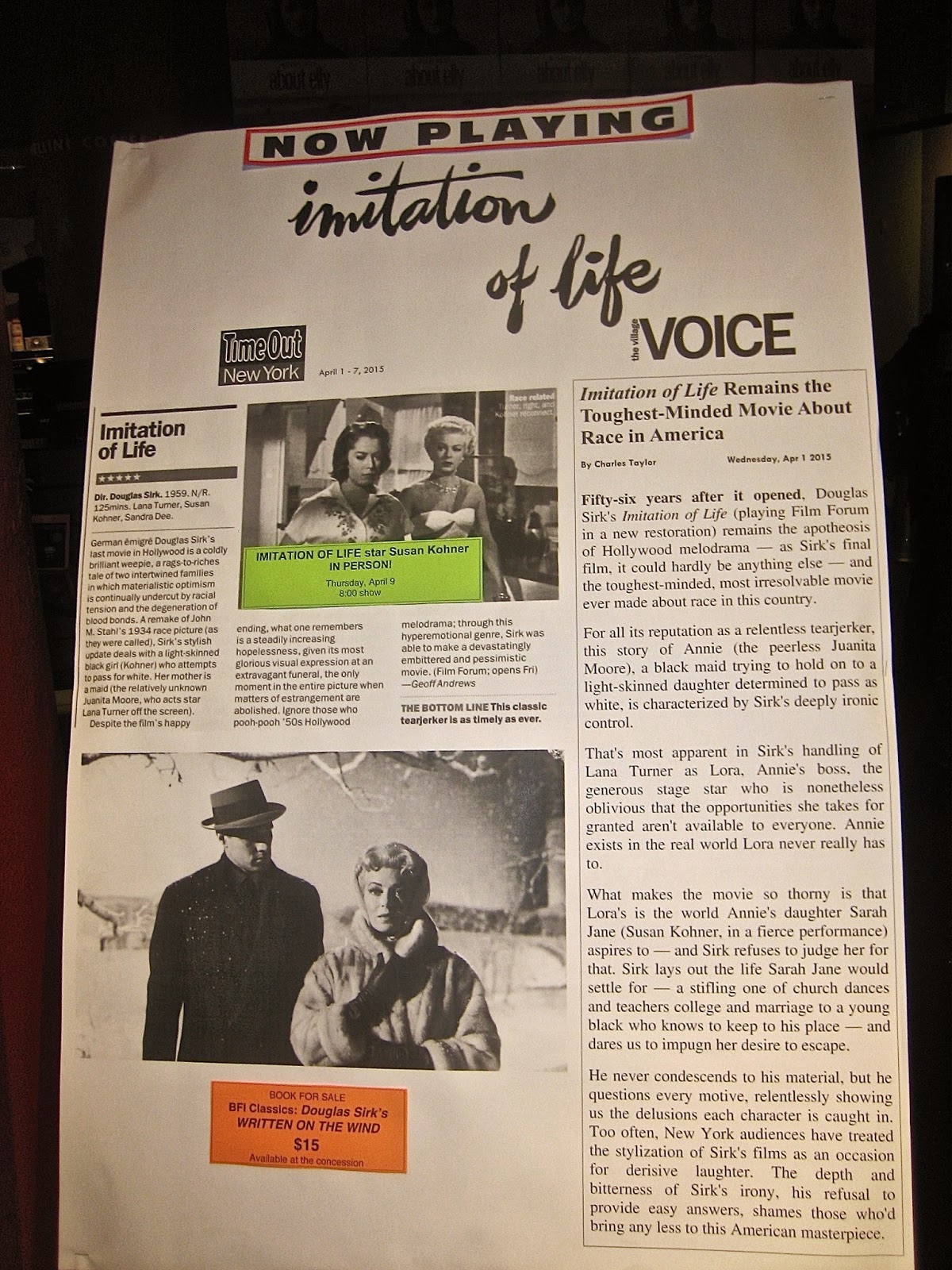 Which brings me to last night's Screening at the Film Forum, where I met the one and only Susan Kohner. Kohner's spectacular portrayal of the deeply troubled, self-loathing Sarah Jane Johnson struck a very strong chord with my mother's side of the family, especially with a certain aunt who basically was the character in real life. (Though Sarah Jane never ran into the same kinds of issues with the law that the aunt in question did, but the less said of that the better...) Following the film, Kohner sat for an interview with a film professor  — whose questions/expoundings were of little or no weight and who clearly missed the entire point of the movie he was allegedly such an authority upon; that assessment was shared by a friend of mine who was also in attendance and is a highly-knowledgeable film scholar and director of films herself — and later answered questions from members of the audience. Since the opportunity was afforded, I took the mic and told Kohner of how much her character and performance meant to my family and especially my aunt. Following that, she was also kind enough to pose for a shot with her that I will send to the interested parties in my family, especially the aforementioned aunt. 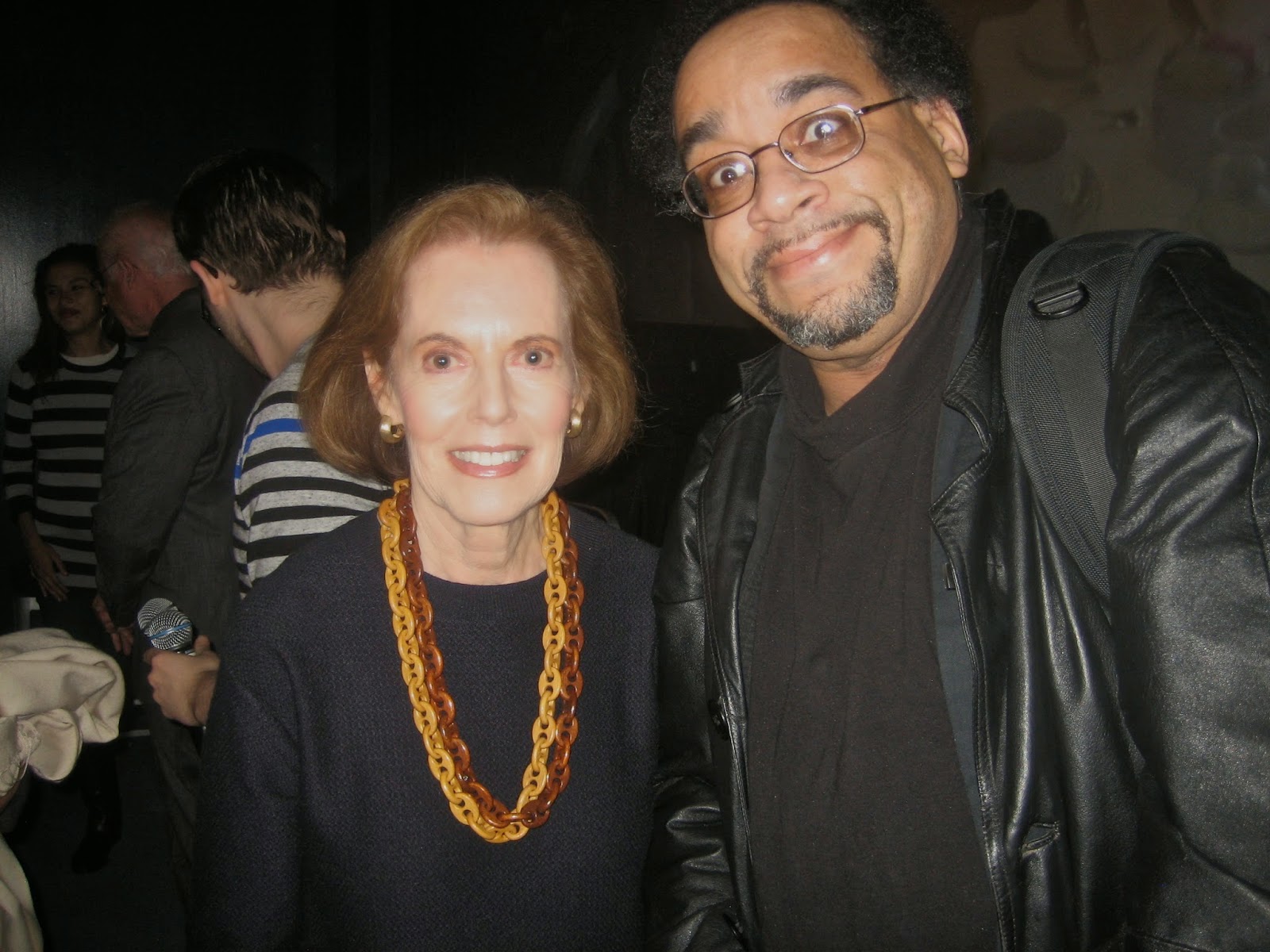 Yer Bunche, with the one and only Susan Kohner.
Posted by Bunche (pop culture ronin) at Friday, April 10, 2015 No comments: