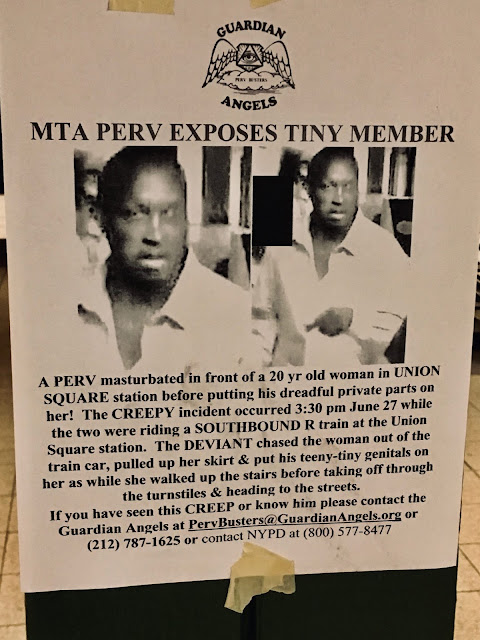 As just encountered at the 14th Street/Union Square subway station in Manhattan. Not only was this loser's face caught on camera, but he's publicly called out for wielding a tiny, wee tadger and the flier proclaiming this tragic state was plastered all over the place, impossible to miss.
Posted by Bunche (pop culture ronin) at Friday, July 26, 2019 No comments: 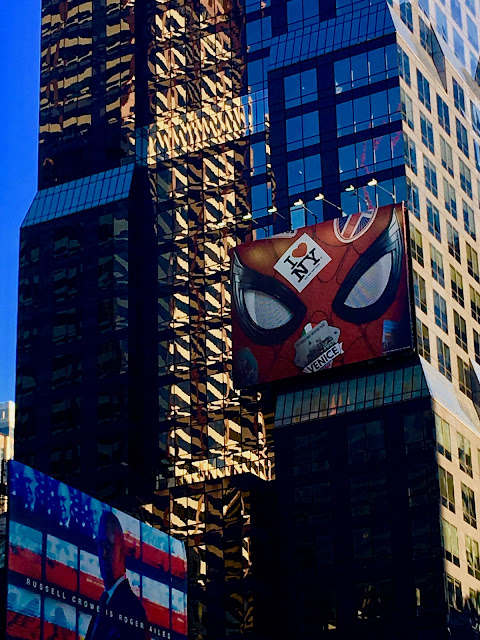 As seen in the theater district. The perfect placement of an eloquently silent ad for the latest film featuring perhaps the most quintessentially NY superhero.
Posted by Bunche (pop culture ronin) at Sunday, July 14, 2019 No comments:

WAIT FOR THE BLACKOUT: A MISADVENTURE 42 YEARS AFTER THE 1977 NYC OUTAGE 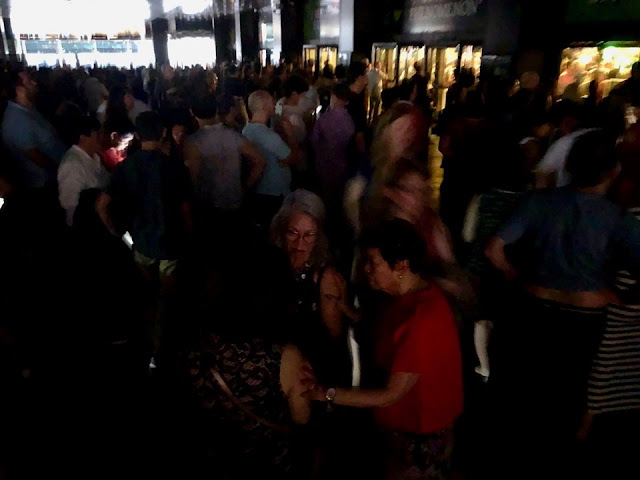 Outside the entrance to the Circle on the Square theater, home to the revival of OKLAHOMA! (photo by Susan Boardman)

Well, last night's plans turned into a true NYC shitshow, and on the 42nd anniversary of the famous 1977 blackout, no less.
Myself and five friends snagged tickets to the revival of OKLAHOMA! on Broadway, so I arrived at the theater about fifteen minutes before we were all due to meet out front. Upon arriving I discovered that not only was the theater where OKLAHOMA! was completely dark save for emergency lights in part of the main lobby, the theater across the way that was home to WICKED was likewise dark. The weekend is one of the most packed times for Broadway shows due to the tourist influx, especially during the summer, so there were hundreds of people milling about in the dark in the underpass where the theater entrances are. Seeing what was going on, I soon found that the west side of Manhattan was suffering an all-over power outage from roughly the 42nd Street area up through and including the Upper West Side, from Broadway apparently over to the West Side Highway.
I waited around to gather info but it became apparent that the evening's show was likely well and truly fucked, so I texted the gang and suggested we abort. Three of the five were stuck either in traffic or on the subway, and traffics was snarled as hell while the subway lines on the west side were not running at all. I removed myself to the benches in front of the Paramount Plaza and told everyone to meet me there, but only Susan and Daniel actually made it. (They live close enough to walk there. The others, not so much.) Megan, Tim, and Suzi all ended up screwed by transit and the evening's performance was inevitably canceled so they bailed, and Daniel, Susan, and myself all went home.

My local train was not running this weekend anyway, due to necessary track work, so I had to take a different line to get to the main subway traffic hub near my home, and from there I had to take a local bus. Bottom line: Close to four hours were wasted on transit and just hanging around, only to eventually have to return home. Oh, well, it could have been way worse. It could have been during a heat wave or pissing rain, but I had my book to read so I was happy.
Oh, and since our dinner plans also fell through, I opted to grab a fish sandwich at the schmancy McDonald's near the theater that caters to the legion of tourists. Upon entering the McDonald's before I'd hit the theater, I noted the place's AC was not functioning and that they had wheeled in a huge portable industrial air conditioning unit that was aimed at the main counter. The emergency lights were on and the kitchen was up and running, so orders were being filled, but the fetid air was thick with the unmistakable miasma of summer heat-activated derelict urine. The place reeked like a piss factory, but it deterred not one of the joint's ravenous customers.
Posted by Bunche (pop culture ronin) at Sunday, July 14, 2019 No comments: