IT'S THE HOLIDAY SEASON IN THE ROTTEN APPLE!!! 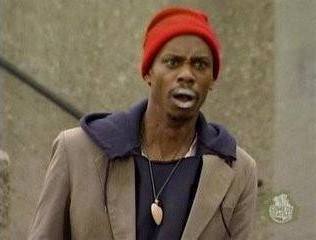 Ah, the holiday season in NYC, when the beggars (homeless or subway "entertainers" or otherwise) come out of the woodwork.

On the Q train to and from Mount Sinai (for the second of this month's bi-weekly Dupixent treatments for my atopic dermatitis), I encountered a tejano duo (the same one, both ways) and numerous bums, one of whom was among the most strung-out women I have ever seen. Then, just a few minutes ago as I was leaving my local pharmacy after picking up a prescription, some random black dude walked up to me, looked me up and down and then said "Say, nigga...You like like a rich muh-fugga...GIMME FI' DOLLAHS!!!" The idea of myself being perceived as a "rich muh-fugga" amused me to the point of out-loud laughter, which confused the beggar. He even uttered "What the fuck???" as I walked away cracking up to myself.
Posted by Bunche (pop culture ronin) at Tuesday, November 20, 2018 No comments:

Labels: HOLIDAYS 2018, ON THE SIDEWALKS OF NEW YORK 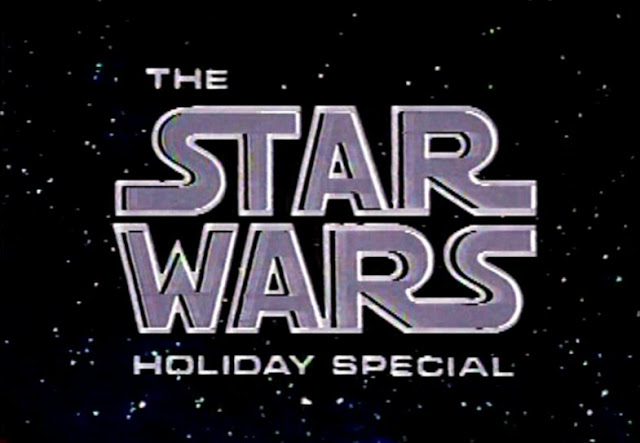 Today marks the 40th anniversary of THE STAR WARS HOLIDAY SPECIAL, unarguably one of the worst pieces of crap in the history of American television. On this night in 1978, the world was still gripped in STAR WARS-mania a year-and-a-half after the original film came out and the first cinematic sequel was not due until May of 1980, so this two-hour special was created in hope of scratching that itch and possibly starting a new annual tradition for the whole family. I was but one of millions of eager youngsters who sat in front of the TV that night, foaming at the mouth for a return to thrilling adventures in the galaxy far, far away, but what we all got was something that none of us were prepared for. 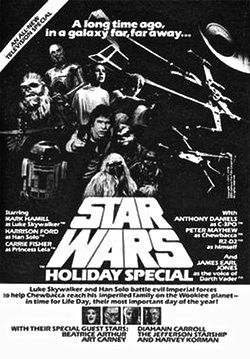 The show was an absolute train wreck of late-'70's variety show cheese, complete with guest stars that would possible appeal to our parents and grand-parents but not our demographic, special effects cribbed directly from the movie, musical performances that should have been outlawed by the Geneva Convention, Carrie Fisher very obviously coked-up out of her mind, Mark Hamill fresh from his face-scarring accident and slathered with so much makeup that he was easily mistaken for a pretty-but-butch lesbian tennis star, Harrison Ford looking totally ashamed and pretty much marking the exact moment when he stopped giving a fuck, "agonizing "comedy" sketches that were about as funny as the Middle Passage, and a framing device that hung the entire mess on spending time with Chewbacca's family as they nervously awaited his return for the quasi-psychedelic Wookie holiday of "Life Day" (which is never properly explained). The show's two saving graces were the presence of Bea Arthur as the proprietor of the famous alien-packed cantina, and an animated segment by Canada's Nelvana studio that featured the first onscreen appearance of Boba Fett (voiced by LOVEJOY's Ian McShane).
The end result was so bad that it came off as "entertainment" intended for no one, and school that Monday was an all-day litany of kids grousing in stunned disbelief over what they had witnessed. The idea that any of us would hate something that was officially a STAR WARS project featuring the original cast was inconceivable, yet there it was, and it was jaw-droppingly, mind-bendingly godawful. Universally lambasted for its level of wretchedness that made PLAN 9 FROM OUTER SPACE look like 2001: A SPACE ODYSSEY by comparison, the show was never broadcast again and George Lucas — who, it should be noted, signed off on the this debacle — was famously quoted as saying "If I had the time and a hammer, I would track down every copy of that program and smash it."
However, thanks to VCR's being a relatively new thing, the special was captured for posterity by eager fans, and now well-circulated bootlegs of dodgy visual quality are the only way to see the damned thing, as it has never received an official release and probably never will. That said, it is easily obtained and can even be had in a version with running commentary from the Rifftrax guys (who also starred in the Mike years of the legendary MYSTERY SCIENCE THEATER 3000). And you know a show is terrible when the vintage commercials (that were taped along with the special during its sole legit airing) are one of its least-irritating aspects.
If the usual suspects do Movie Night at Lexi's this week, I'm going to push for a screening of the Rifftrax version of this and hopefully spread the misery. 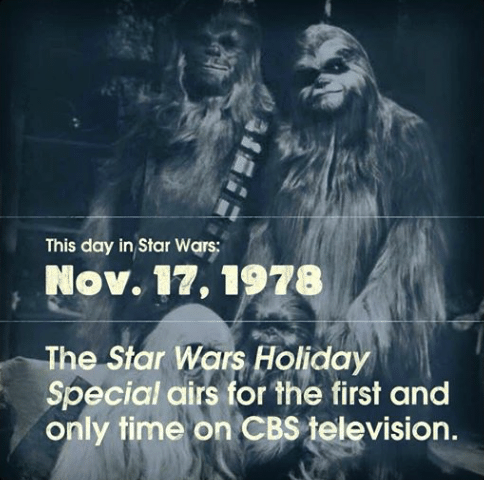 THE ETERNAL CHARM THAT IS PARK SLOPE

Ah, Brooklyn. Where you can just be hanging out in your apartment while working on a freelance assignment and hear a random passerby on the street scream "FUCK YOU!!!" at some unseen offender. 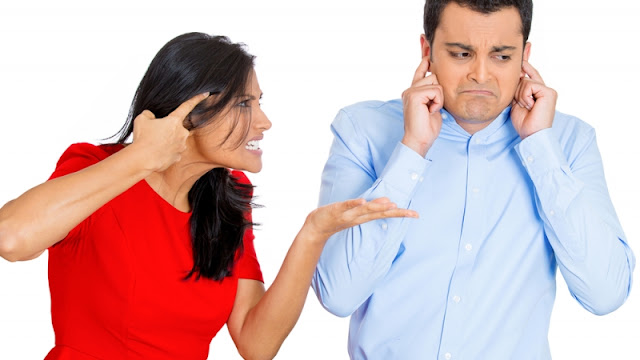 (Not the actual subjects of this piece, DUH.)


It's 1:30am and thanks to the ease with which I can hear the action on the sidewalk in front of my building through closed windows, I just overheard a woman, I think one of my building's newer residents, address what I presume was her date with the following:
(excited and grateful) "OH, THANK YOU! THANK YOU, THANK YOU!!! You bought me ONE bottle of pills! (drops the excited/thankful act) You're so CHEAP! You can just fuck off..." (walks into building's lobby, slams door)
Posted by Bunche (pop culture ronin) at Thursday, November 08, 2018 No comments: