GEARING UP FOR COOKOUT SEASON (HOPEFULLY) 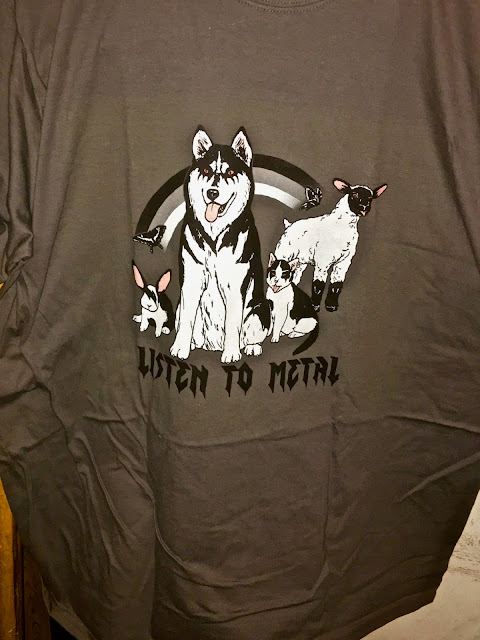 It's always a good day when one's new shirt for the cookout season arrives. (Though it's anyone's guess as to when this year's cookout season can officially start...)
Posted by Bunche (pop culture ronin) at Friday, March 20, 2020 No comments:

WHAT IS SEEN CANNOT BE UNSEEN 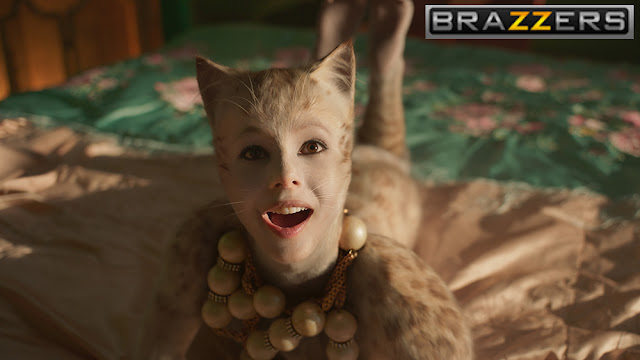 I just mentioned this in a Facebook group conversation with fellow plague shut-ins and I felt it was worth publicly disseminating:

Considering how fast the adult film industry cranks out "parodies" of movies and TV shows, out of sheer morbid curiosity I just checked to see if a proper X-rated version of the CATS movie exists and what salacious idiocy it bore as packaging art. It could not possibly be more ludicrous than the actual movie, right? A proper tenderloin parody does not exist — YET — so the search did not yield the results I was looking for. That said, and I say this as a friend and as a concerned citizen: Do NOT Google "cats porn version." Trust me on this one...
Posted by Bunche (pop culture ronin) at Wednesday, March 18, 2020 No comments: 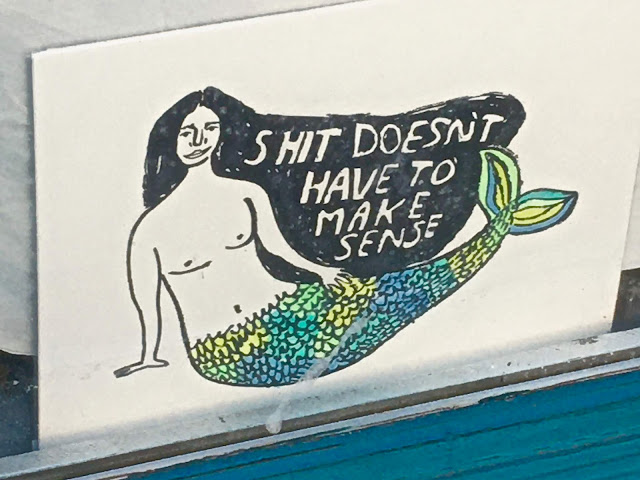 As seen in the window of a temporarily closed boutique on Park Slope's 5th Avenue.

Went out for a brief-but-necessary errand to a print shop ad surveyed the state of the neighborhood in the process. During this time of caution, the streets in my section of Park Slope are uncharacteristically barren as the locals hole up and settle in to weather the CORVID-19 pandemic.  Vehicular traffic was equally sparse, save for the scheduled B63 buses. Small businesses and eateries are temporarily closing though, surprisingly, there was a long line as locals waited for the pricey artisanal butcher shop to open. 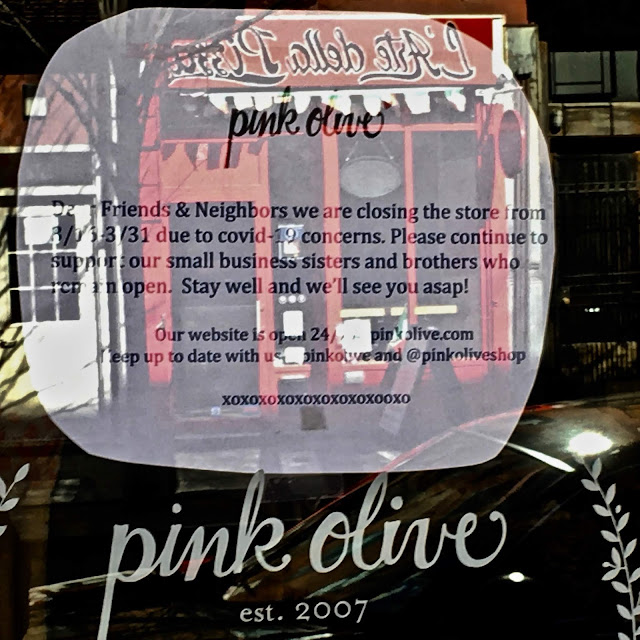 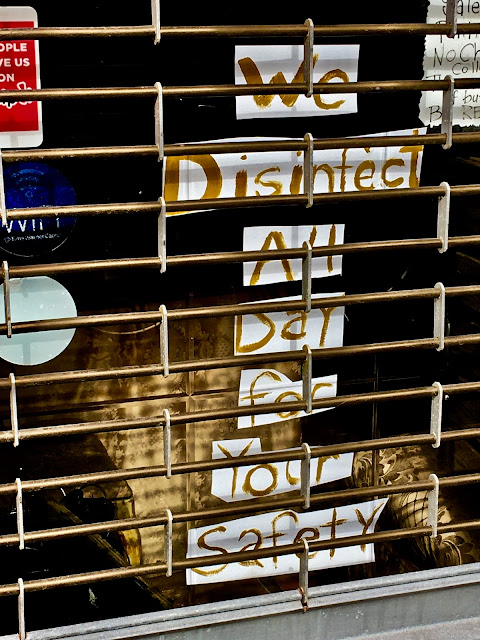 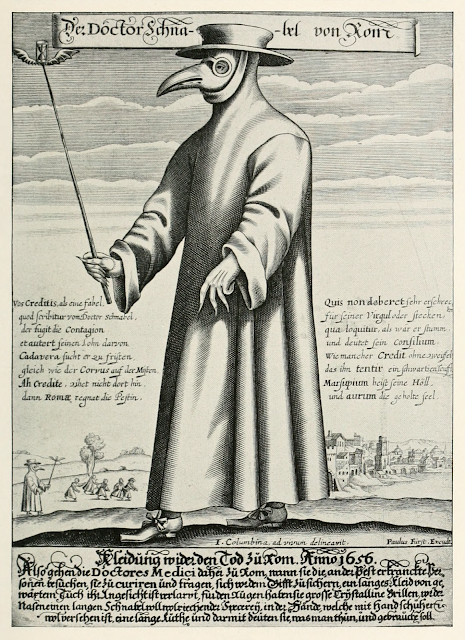 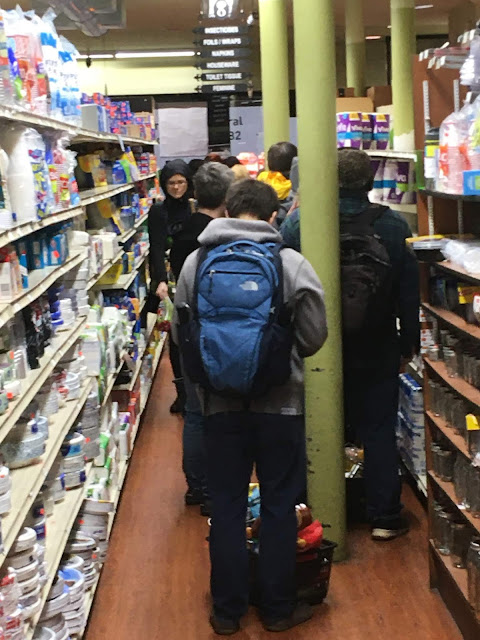 ...and the rear.
The queue for the cashiers stretched from the registers all the way to the rear of the store, and the photos I took to illustrate this were from my vantage point a little above the halfway mark on the checkout line. There was no express line, so those of us with a handful of items were stuck behind nervous hoarding shoppers with ludicrously overflowing shopping carts. There were of course the inevitable meltdowns as nerves frayed and tempers flared, with the most memorable being from a woman who needed just a bottle of laundry bleach but who was daunted by the prospect of having to wait on an interminable line. Upon trying each of the three lines and seeing each was as long as the next, she let out a shrill shriek, exclaimed "YOU'VE GOTTA BE FUCKING KIDDING ME!!!" and angrily lobbed the jug of bleach at a bare shelf, narrowly missing the heads of the couple that were standing there.
For my part during all of this, I just remained calm, secure in the knowledge that it would soon be over and that I only lived just aroud the corner. That said, the usually five-minute trip around the corner for three items ended up expending thirty-four minutes. Believe me, if the items were not vital for the next few days or if they could have been had at one of the two nearby well-stocked 24/7 convenience stores, I would have immediately gone elsewhere.
Posted by Bunche (pop culture ronin) at Friday, March 13, 2020 No comments: 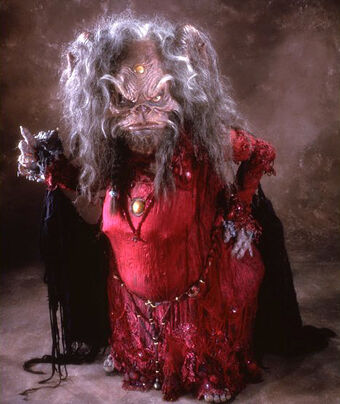 After bailing on a dim sum meal with dear friends this morning, I had planned to stay in today due to having overdone it during my last gym workout, but I had to go out to pick up a prescription and obtain a stamp for mailing out my rent check. I had intended to pick up the prescription first and swing by a 24/7 deli for a stamp on the way back, but the independent mailing shop that used to be run by a now-deceased local character who was an amusing (if paranoid) curmudgeon was unexpectedly open on a Sunday, so I went in.

The place is now run by the late curmudgeon's sister, a blonde old school former hippie chick who is basically his identical female clone, but she is somehow even more curmudgeonly and crazy than her brother ever was. She's short, overweight, has a mouth like a longshoreman, and chain-smokes as badly as her brother used to, which renders the air inside the place about on par with the atmosphere of the planet Venus. (Henceforth, I will refer to her as Aughra, after the wise woman character in THE DARK CRYSTAL.)

Upon entering, I found her seated behind the counter at her computer, accompanied by some scurvy-looking local skel and heartily chugging a can of beer. When she saw me she saluted me with her beer and noted that I had caught her on her day off. Her friend went outside to deal with an incoming phone call, which left me alone with Aughra, and whenever I'm in the shop alone with her, she becomes incredibly close-talker chatty and impossible to escape from without being rude.

She first cornered me with babble about how the entitled locals of Park Slope treat her like she was a slave (or lesser) and her subsequently throwing them out when she lost patience with them, but then veered onto several other subjects, including (but ot limited to) her interest in sampling the assorted religions of the world in order to better understand humanity, her distrust of American corporations, her vitriol toward the sons of George W. Bush, a perusal of a rare  pre-WWII hardcover copy of the collected works of Sholem Aleichem (creator of Tevye the milkman, which I pointed out to her, as she had never read the book; I would love to own that edition), and general grousing about how she frequently has to pay out of pocket for canceled goods and services. All of this took up about fifteen minutes of my time as she polished off two more beers while leaning in close to loudly talk at me, which put me right within the rage of her nasty beer /cigarette breath and horrifying B.O. (If I had to guess, she either had not showered for a few days, or she'd been wearing the same clothes for perhaps a full week, coupled with not bathing.)

As I futilely sought an opening in the one-sided conversation during which I could make a hasty escape, she suddenly shifted gears, moved in closer, and began a graphic account of how "sexually fucked-up" her ex-husband was, due to him having been raised in a puritanical Christian household. Quoted verbatim:

"My husband and I used to have pre-marital sex, which he was uncomfortable with, and there was this one time when I was on top, ya know, really grindin' on him, and I got offa him ta give him a blowjob. As I was down there about to get started, he went 'STOP!!! I gotta think about this...'" She then stepped away from me while fluttering her hands in the approximation of a bird taking wing, accenting the gestures with a whistled noise meat to sound like the lonely winds blowing across a barren wasteland. She resumed with "But I wasn't insulted. Like I said, he was sexually fucked-up. But we were together for a long time, so he eventually got used ta me."

I was at a loss for anything to say, as all of this had come from out of nowhere, but I found my opening to leave when she suddenly remembered she had to feed her cat, Ratty. I made my exit and went to pick up my prescription at the chemist's shop a few doors down, and when I went in I told Gary, the place's manager (with whom I am friendly; we always crack each other up) about what had just transpired. He laughed his ass off and noted that they regularly use Aughra's services when shipping or receiving items, and he said that I would not believe some of what she puts Angel, the chemist shop's good-looking male Latino employee, through whenever he goes in there.