I'll just let this one speak for itself. 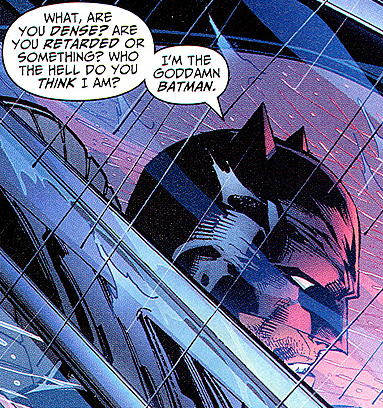 Yes, you read that right and it is most definitely not a gag. Ben Affleck has been cast to play Batman in the upcoming sequel to this summer's MAN OF STEEL. Don't believe me? Look it up any news feed.

I'm certainly no fan of Affleck but, to be fair, the abortion that was DAREDEVIL was a decade ago and Affleck has reportedly turned in some very good performances since that train wreck, so I am warily willing to give him the benefit of the doubt...
Posted by Bunche (pop culture ronin) at Friday, August 23, 2013 No comments: 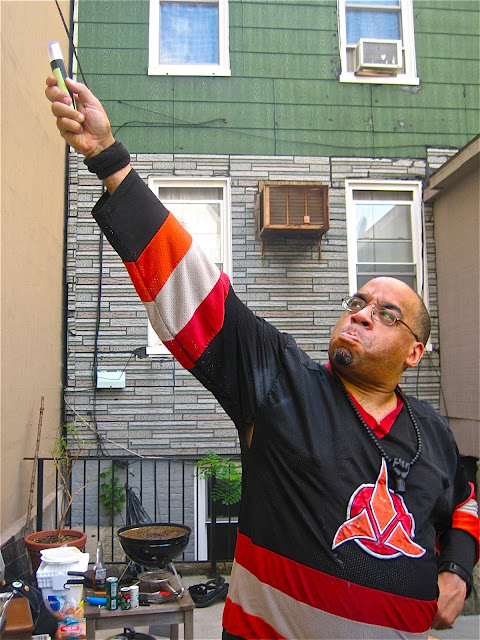 As seen in Astoria, Queens back in July. Though I made like Hayata, I did not turn into an awesome, gigantic red-and-silver ass-kicker of giant monsters.

Time for another of my periodic reality checks, with this one serving to give you a heads up on what's been up in the mundane existence of your favorite Bunche and also shed some light on why I've only sporadically checked in here at the vault as of late.

Since roughly the start of this year, I have to admit that my world has at times felt like I've been serving a prison sentence or been stuck in some hellish limbo wherein nearly everything I set out to do has resulted in returns of the most meager kind or outright failure. Jobs I've applied for didn't work out — if I hear "you're over-qualified" one more fucking time... — personal business ventures I'm involved in appear to have either stagnated or gone into stasis at this time, writer's block has plagued the manuscripts I have in progress, insomnia has been semi-constant, I waited for freelance paychecks that took forever to arrive (all of which immediately went to bills I had to put off while waiting to get paid), I've been helping some dear friends get through some considerable life-crises, the constant noise and obnoxious misery of my neighborhood has put me in a mind to go out and rout the sidewalks with a WWII army surplus flamethrower, I've found little or no pleasure in any aspect of life, suffered stress/worry-related ailments, and in general things have been stuck in a progress-void rut. In short, I recently arrived at the not-too-hard-to-deduce conclusion that I was suffering from deep depression and, though I can hide it well, I had to do something to shake myself out of it.

Simultaneously, a dear friend whom I've known for nearly four decades found herself in a new situation that saw her moving into a new home. So, knowing of my admittedly fragile mental/emotional state over the past eight months, she was kind enough to open her door and invite me to her new place for as long as I wanted to escape from my own situation. I took her up on that offer last week and spent six whole days at her beachfront house, doing nothing but enjoying the quiet tranquility and the cries of the gliding seagulls, cooking for her and her son (who's my favorite nephew), majorly de-stressing, pulling down eight hours or more of uninterrupted sleep per night, watching some of my stress-related physical ailments clear up after seeming to never heal, losing close to ten pounds, breaking my writer's block, and in general just getting my head and spirit together for the first time in ages. Being away from Park Slope for a while was just the revitalizing tonic I needed, plus the added perk of having a sort of family for a week was a delight. (Though it would have been nice if my friend didn't have to work like a woman possessed while I was there, but I totally understood. Hopefully she'll be able to do more relaxing and hanging out without being pre-occupied with work pressure when next I visit.) I did not want to leave and I've told her many times how much I appreciate her generosity and hospitality, but it really is impossible to properly convey how much she and my nephew helped to free me of the spiritual toxicity that has plagued me pretty much since the start of this year. I won't forget her cornucopia of kindness, and if she ever needs anything from me and I can provide it, all she has to do is ask. It's times like this when one learns who one's friends really are, and she's been one of the finest that a person could possibly ask for.

So now I'm back in the Slope and I aim to maintain my positive state of mind, creativity, and health, so expect to hear from me a lot more often. I apologize for falling behind in my postings, but I think you understand when I unequivocally state that depression is a motherfucker that will kill you if you don't grab it by the balls and squeeze hard. Let's just say that my grip is once again strong and I'm once more ready to live as someone other than a self-imposed prisoner serving time in my studio-as-cell-with-amenities.

FUCK KICK-ASS, GIVE HIT GIRL HER OWN GODDAMNED MOVIE!!!

I've been a huge Blondie fan since 1978 — I rank them among my Top 10 all-time favorite bands; if all you know are the hits, you really need to dig deeper — yet I never knew this existed until just a few minutes ago. I just wish Debbie Harry had been a Bond girl back in the day, or at least had been tapped to perform one of the series' theme songs. Ah, well, a missed opportunity, but at least we have this for posterity.