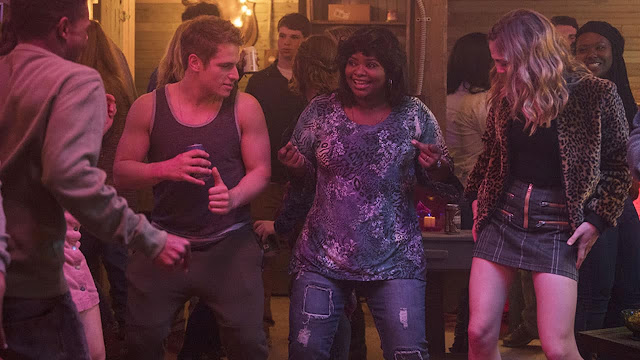 Getting their underage drunk on in Ma's basement.

16-year-old Maggie Thompson (Diana Silvers) moves with her mom (Juliette Lewis) back to her mother's podunk hometown in Ohio after her mother's dreams of making it big in California amount to squat and her marriage falls apart. Now the new kid at the local high school, Maggie is soon befriended by a quartet of average, nice-enough fellow students whose one goal in their boring, go-nowhere lives is to get as stoned and drunk as possible, as often as they can.

While trying (and failing) to get adults to buy booze for them at a liquor store, the gang manages to convince veterinary secretary/assistant Sue Ann Ellington (Octavia Spencer) to help them in their quest for underage wastedness. The sympathetic Sue Ann recalls what it was like for her growing up in their boring-ass town and continues to buy the kids liquor, eventually inviting them to party in her remote house's basement. Despite them knowing absolutely nothing about this kindly grownup, the desperate kids accept her invitation and begin regular visits to their illegal speakeasy and find Sue Ann, whom they now refer to as "Ma," to be an affable and fun hostess who is more than happy to join them in their hard-partying shenanigans. But almost immediately her mask of lovable sweetness occasionally allows glimpses into a much darker true nature, and though she gives the gang free rein of the basement, they are warned never to go upstairs, as "that is my world."

Though sensing that something is rather "off" about their overly-benevolent hostess, the allure of a safe place in which to get fucking shitfaced on the regular is too great a temptation, and in no time Ma's place becomes the off-the-chain hangout spot for a legion of teens from the local high school and beyond. But Ma's facade slips more and more with each passing day, as she stalks the kids online, gathering as much information on them as possible and serially bombarding them with requests for them to hang out at her house. She even begins stalking Maggie's mother at her job as a casino waitress, and during that bit of creeping we start to piece together Ma's back story and exactly why she obsessively wishes to hang with Maggie and her pals. When all of the pieces come together, what we are left with is a cautionary tale centering around one deeply (yet understandably) deranged, lonely, and damaged sociopath. 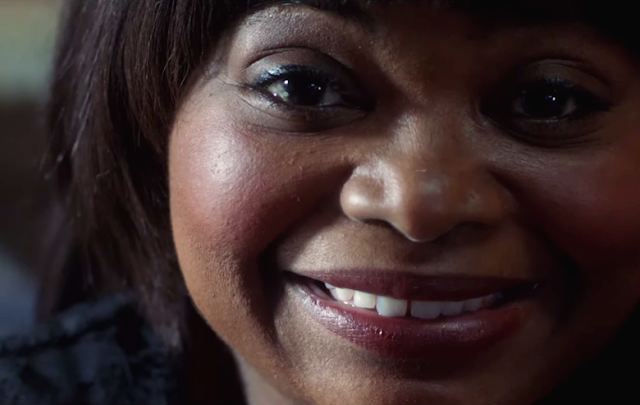 Sue Ann "Ma" Ellington (Octavia Spencer): behind that sweet smile lies the heart and mind of a deeply pathetic and damaged psycho.

MA is concrete proof that the sensibility and thrills of '70's era psychological horror exploitation has not died out, and it's a hell of a fun thrill ride that is best appreciated when seen with a black audience. My people's "audience participation" with movies in general but horror flick in particular is so well-known that it is now its own punchline, and scary movies, especially those with crazed antagonists of a dusky hue, elicit unbridled reactions that are often hilarious but that also engage the Chalkasiains in attendance to find common ground with us. MA is old school grindhouse horror and social commentary rolled up into a satisfying burrito that starts out very deeply-rooted in an all-too-recognizable suburban purgatory. A death trap for personal growth or progression, wherein the youth seeks to numb its senses as it faces the inevitable departure from the mundanity of high school social politics and cruelty into an adult world where hopes and dreams are crushed by the realities of dead-end jobs, loveless marriages, and unwanted progeny.

MA connected with me in a rather visceral way because a lot of its over-the-top depictions of teenage partying excess rang absolutely true when compared to my own experiences growing up when and where I did. Westport, CT in the late 1970's and early 1980's was a far cry from rural Ohio, what with its affluent ostentation and atmosphere/culture that bore little resemblance to the American reality at large in other locales, but its teen culture of driving around aimlessly in search of any sort of altered state of consciousness, regardless of it being had in someone's home or in the weeds-choked and secluded confines of random, remote parking lots, was exactly like what is seen in MA. Between the ages of 15 and 18, I went to a good number of out-of-control parties that were sanctioned and participated in by adults — sometimes the parents of some of my peers — and during those gathering I and many of my classmates learned how to drink and even do assorted drugs, often with the parental implication that it was safer for us to do so under their roofs than having us drive somewhere while wasted. The police were seldom involved and I and many of my peers developed drinking and drugging tolerances that would have impressed the likes of Hunter S. Thompson. (Consequently, there were also a considerable number of drug and drunk-driving-related deaths to go along with all of the pre-collegiate debauchery.) Anyway, the party insanity seen in MA actually did and does happen, so go into the film knowing that some of us lived it (and, miraculously, lived through it).

The kids in the cast all do serviceable jobs, but the film is unquestionably Octavia Spencer's spotlight in which to draw the viewer in with her initially lovable aspect, but when Sue Ann goes into full-tilt crazy-as-a-soup-sandwich mode, Spencer chews the scenery like a motherfucker. And it is glorious. 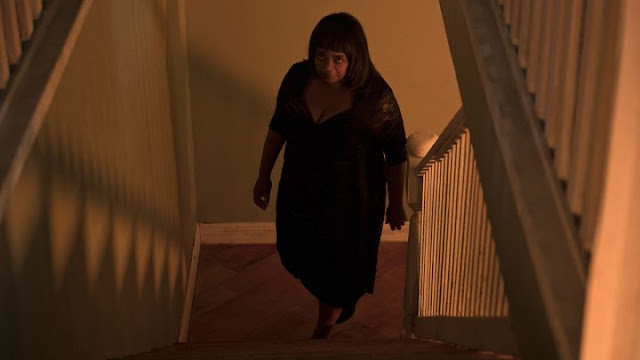 Sue Anne: Proof that monsters are made, not born.

"But," you may ask, "What drove the formerly sweet and shy Sue Ann over the edge into full-on bunny-boiler territory," you might ask? Well, I won't give away the specifics, but throughout the film we are given glimpses into her memory of her adolescent crush on a hunky white classmate and how her vulnerability let her become the victim of an incredibly cruel and humiliating prank engineered by her school's cadre of "mean girls" and her unobtainable love. If you are a horror fan, you are no doubt familiar with what was arranged for and done to poor Carrie White, but what befalls Sue Ann eclipses Carrie's tragic humiliation, something that would seem almost impossible, but I assure you that Sue Ann's victimization is the single worst example of "They're all gonna laugh at you" that I have ever seen. Seriously, if it happened in real life today, it would result in harsh prosecution, with the possible tacking-on of classification as a hate crime, as Sue Ann was one of the school's minute number of students of color. (An aspect noted to pointed effect by Sue Ann in the film's climax.)

With all of that said, it should be pretty obvious that I very much enjoyed MA, though it should be made clear that it perhaps best enjoyed by those of us whose bread and butter is old school exploitation trash cinema. Though there is social commentary to be had, the true meat of the narrative lies in the fact that it is an old school tale of cruelty-spurred vengeance, and though quite believable for its first two thirds, the film goes out-the-window insane with some of the shit that happens during the final reel. It should also be noted that if one wants approach the film with a minimum of knowledge regarding some of its more shocking elements, I advise avoiding Google Images and other sites that features promotional stills released by the studio. Some of them spoil some major nasty moments, so I'll just leave it at that. RECOMMENDED.

Oh, and Juliette Lewis is great as Maggie's struggling mom. I always liked her, and it's good to see her in another of her down-to-earth relateably-trashy roles. 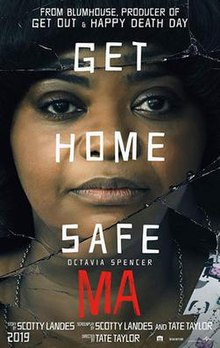 Poster from the theatrical release.
Posted by Bunche (pop culture ronin) at Tuesday, June 04, 2019 No comments: