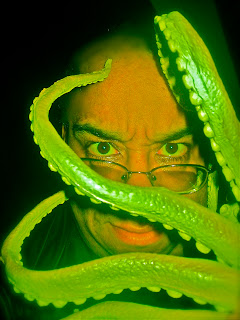 The month of Halloween is upon us as of tomorrow and considering how much fun I had last year doing the first edition of 31 DAYS OF HORROR, I'm psyched to review 31 more horror movies to delight enthusiasts and alert readers to flicks they may not have seen before. There will be examinations of classics, thrillers that blur the line of what may be specifically defined as "horror," and unbiased looks back at some of the "slasher" fodder that so defined my generation's horror movie experience, so get ready for anything to happen...

OH, I AM TOTALLY THERE WHEN THIS OPENS...

WHEN GEEKDOM RANDOMLY REPRESENTS ON THE STREET

Just went around the corner for some dishwashing liquid and saw this guy out walking his dog. 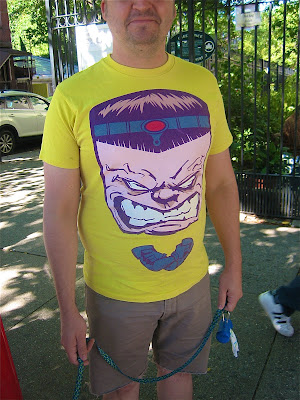 I didn't realize what was on his shirt until I walked past him and then I stopped and asked, "Hey, is that M.O.D.O.K.?" to which he delightedly answered, "Yeah!" His girlfriend then said — in that weary tone that only long-suffering girlfriends and wives have — "Okay, the shirt is awesome..."
Posted by Bunche (pop culture ronin) at Saturday, September 15, 2012 No comments: 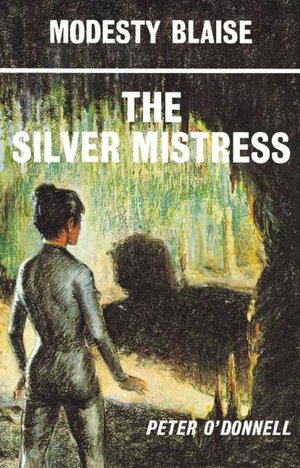 A group of professional scumbags fake the death of Sir Gerald Tarrant and hold him hostage, subjecting the ageing intelligence administrator to brutal torture at the hands of the sadistic Mister Sexton, a martial artist of the first order who knows how to work human pressure points to excruciating advantage. If you've read this far you know what this series is about, so do you think Modesty and Willie are going to to tolerate that bullshit?

THE SILVER MISTRESS is a tough book to critique because it's not so much a proper novel as it is a short story stretched to novel-length, and therein lies the problem. The basic plot is quite good, but there was really no need to pad it out into what amounts to a lot of slow-moving hoo-haa leading to the action not really getting underway until the book's nearly halfway over. Sure, there's the usual rich characterizations and the first full appearance by Willie's steady girlfriend, the charming and one-legged Lady Janet Gillam (previously seen briefly in the short story "I Had A Date With Lady Janet" in the PIECES OF MODESTY collection), but Henry Quinn, a former airline pilot, tested my patience by being rude and obnoxious to an annoying degree and to no great effect, and once his role as a concussed witness to Tarrant's kidnapping is over there's really no need for him to be in the story. There's much made of two "outsiders" to Modesty and Willie's (and to no small degree Tarrant's) danger-fraught world being allowed to accompany them on a mission, something I had an extremely hard time believing Modesty and Willie would ever allow to happen, and of the two only Lady Janet really adds anything to the proceedings. Sure, there's some business about Quinn getting over a severely traumatic event and butching up when push comes to shove, but frankly I just didn't care about the guy.

The only real bright spot in all of this over-extended mishegoss is Mister Sexton, hands-down the most formidable physical threat ever faced by Modesty and Willie, even moreso than Willie's own personal demon, the diabolical Simon Delicta (from book four in the series, A TASTE FOR DEATH). He's a master of hand-to-hand combat whose skills render both of our heroes unconscious in seconds when he first encounters them and, being aware of their considerable reputations as all-around badasses, he decides to keep them alive so he can finally have opponents worthy of his talents. When Modesty does finally throw down against this asshole it's the one bit where the book pays off, their savage battle allowing the story to reach a thrilling climax set in a cold, dank cavern in which Modesty strips nude, coats herself from head to toe with axle grease, and hands Sexton his ass in a fight that I doubt even Willie could have won.

As Modesty Blaise books go I'd have to rate this as middling — except for Sexton — and it's also the first entry where I really noticed O'Donnell's formula. The entries I've read previously all work from a set template, but they each had something going on that allowed me to ignore the beat-for-beat setup and enjoy the books nonetheless, but THE SILVER MISTRESS wears its by-the numbers construction on its sleeve. It makes me wonder if this is where O'Donnell began to weary of the series, or if he was having trouble coming up with the tense and exciting yarns that he seemed to spin with such deceptive ease.
Posted by Bunche (pop culture ronin) at Saturday, September 15, 2012 No comments: 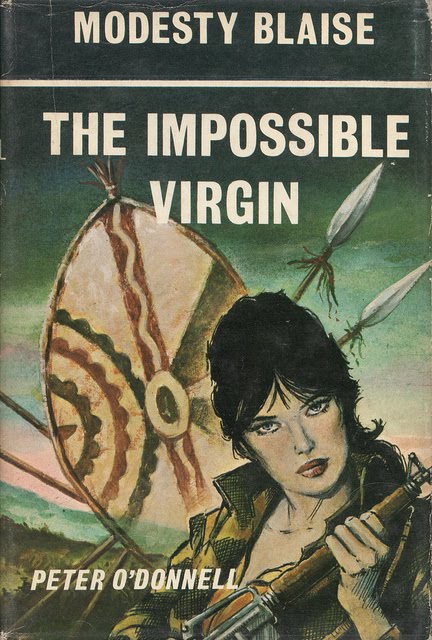 While making an emergency stopover in Rwanda, Modesty Blaise meets Giles Pennyfeather, a slightly dotty medical practitioner with an almost uncanny knack for healing his patients under the most dire of conditions. During her time with Pennyfeather, Modesty serves as his nurse — and later much more — and they soon find themselves accosted by two vicious thugs, Adrian Chance and Jacko Muktar, who seek to shake down the doctor for any information he may have gleaned from Novikov, a Soviet defector with a lucrative secret. The problem is Novikov died after escaping grueling torture at the hands of Chance, and Pennyfeather may have inadvertently overheard him babble the one bit of information vital to the plans of the thugs' master, a diminutive and icily evil international criminal named Brunel. Of course Modesty kicks Chance and Jacko's asses like a motherfucker, humiliating them mercilessly, but lets them live after stranding them miles from civilization, a huge error in judgement that comes back to kick her ass — along with the collective ass of Pennyfeather and her right-hand man, Willie Garvin — in a way that makes most of her previous brushes with death or worse pale by comparison...

That's just the setup for a majorly harrowing adventure, a story that puts both Modesty and Willie to some serious tests of all of their many skills, and even if you're a fan of the series and know for a fact that Willie is the co-lead in every book in this series, there's a sequence that will have you on the edge of your seat and believing along with Modesty that Willie has been taken out of the picture once and for all; I mean, what else could you possibly think if you witnessed your best friend engage in savage combat, while strapped to a steel chair no less, and escaping from a straight jacket as he gets thrown out of a plane flying at three thousand feet, sans parachute? I won't say anymore, but Willie's missing for about the next third of the book, and when he shows up in the nick of time, his explanation of how he cheated death is so ludicrous and over-the-top that you have believe every hilarious word of Willie's account.

And speaking of hilarity, there's a great bit in which Modesty and Willie decide to steal some vital stolen documents from Brunel because their sale would lead to the inevitable sacking of their pal Sir Gerald Tarrant from his position in the secret service, and they just can't let that happen (plus Modesty wants to give the papers to Sir Gerald as a surprise birthday present). After days of intense scrutiny of the defenses in and around Brunel's London home our heroes determine there's absolutely no way to break in without tripping all manner of alarms and getting shot in the process at the very least, even given their world class talents, so they come up with a plan both brilliant in its simplicity and downright sidesplitting in its audacity. I won't tell you how they pull it off, but it's so simple that you'd never think of it, and when it happens you'll smack yourself in the head for not thinking of something so obvious.

Simply put, the heroes are in top form, the villains are among the most heinous human vermin ever to (dis)grace the prose page, and the supporting characters, Pennyfeather and the cruelly abused albino Lisa, are worthy of books in and of themselves. And, no, I'm not going to tell you what the title refers to. RECOMMENDED
Posted by Bunche (pop culture ronin) at Saturday, September 15, 2012 No comments:

Dear Vaulties-
My life at the moment is a cavalcade of boredom and frustration, so I haven't been inspired to write anything new. There's stuff coming for next month since Halloween is looming and I hope to have something of interest to discuss sooner than that, but until then here's an inspirational ditty from good ol' El Duce and The Mentors.
Posted by Bunche (pop culture ronin) at Monday, September 10, 2012 2 comments: