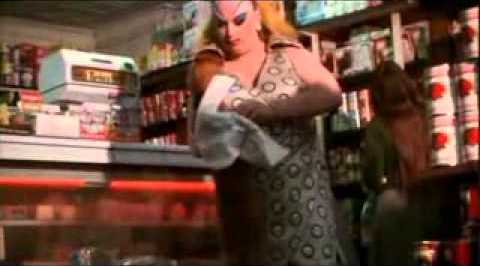 I just got back from stepping out to pick up a prescription, and as I exited my building I saw the younger manager of the Associated supermarket around the corner running full-tilt down my block toward 4th Avenue, with a beefy staff member who could not keep pace hot on his heels. I put it pout of my head as I made my way to the chemists shop, and upon picking up my prescription I made my way back here but stopped into the Associated first for some seltzer. When I entered I noticed two NYPD officers, clipboards for taking notes in hand, conferring with the manager who'd hauled ass past my building.

Being a regular anywhere for nearly 24 years allows one a certain amount of access to the behind-the-scenes skinny, so when I hit the checkout counter I asked the cashier, whom I am friendly with, what was up. She described the situation thusly:

"What happened was this big woman in a hat, lookin' like a man — I think she was a dyke — came to me with a stack of steaks and asked about our return policy. I told her that without receipts we don't take back meats, so she looked at me and snarled 'So, I'm stuck with these steaks???' and with that she walked out with the steaks. So basically she chose some of our most expensive steaks, came up to me, and tricked me into thinking she was an actual customer. Alex (the manager) chased her all the way down to the R train, but she got on and he missed her by like a second."

I suppose I should not be surprised that this sort of thing goes on, but is it just me or is that move incredibly selfish? While the managers at the Associated treat the staff very well and understand when this kind of shit happens, that same kindness might not be exhibited at other NYC supermarkets, and losing high-end goods, especially during a time of crisis, could easily get an innocent cashier fired and cut loose into the nightmare that is the current unemployment maelstrom. Douchebaggery.
Posted by Bunche (pop culture ronin) at Thursday, May 14, 2020 No comments: 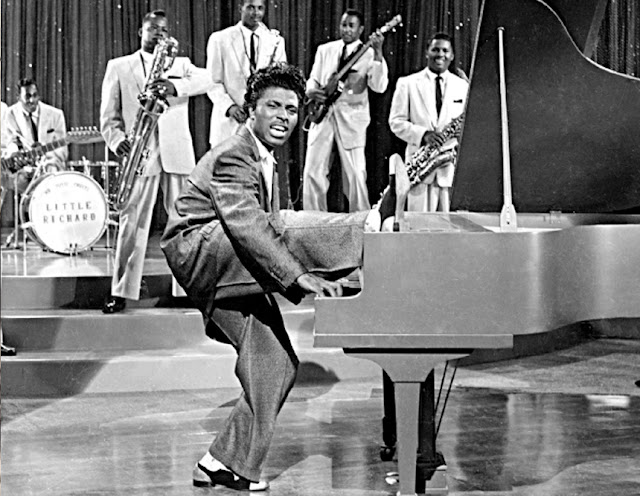 Richard Penniman, better known and beloved as Little Richard, one of the founding fathers of rock 'n' roll, has shuffled off this mortal coil, and I hope and pray that his last word was his signature "WOOOOOOOOOOOOOOO!!!" Crazy as a soup sandwich and gayer than a tree full of songbirds, Richard was arguably rock 'n' roll's first badass queer (at least within the mainstream), and you had better believe he did not care what anyone had to say about it. The guy was a showman to the nth degree, possessed of enough energy to power a continent, and his musicianship on the ivories was so far above criticism as to be untouchable. His antics onstage combined the raw energy of early rock 'n' roll with an aura of "I just escaped from a mental institution with my dick in my hands, and I dare y'all to catch me so you can line up to kiss my black ass," which certainly made him a unique presence in his era. (Though, to be fair, Jerry Lee Lewis was arguably the only one of rock's Mount Rushmore who gave Richard a run for his money in the showmanship insanity department.) Simply put, there was much to love about Richard, and one aspect of him that seldom gets brought up is that he taught us straight boys that not only was outright flamboyance fun, it was cool.

So it is with reverence and respect that I bid Little Richard a fond "Requiescat en pace" with not a trace of sadness, because he truly pioneered the uniquely black flavor of American craziness to popular music, and that is a joyous thing indeed.  Thus I close this eulogy  with an anecdote from when I was in my teens, a quote from my mom on Little Richard:

"Oh, god, Little Richard... When we first saw him on TV in the Fifties, it was like some kind of space-alien had just stepped out of a flying saucer. No one had ever seen anything like that on television, and I distinctly remember saying out loud 'What the hell did I just watch?' when his performance was over. The only thing I can remember that was as crazy around that time was James Brown with that cape, but that's another level of weirdness." 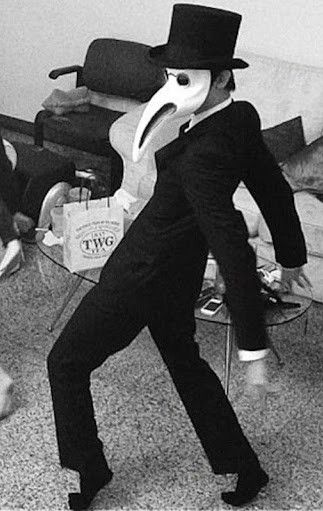 One upside to the barrenness wrought by the pandemic: Being able to wander around a practically-deserted Key food at 7:30am in what amounts to a gas mask while loudly singing along with "Pico & Sepulveda" and grooving my way to the self-checkout aisle. The staffer assigned to watch the line and enforce social distancing could not take his eyes off of the large, strange black man singing and dancing like a loon. The few others present at checkout didn't bat an eye. Quite freeing, really.

A WOULD-BE PANDEMIC PROFITEER STRIKES OUT 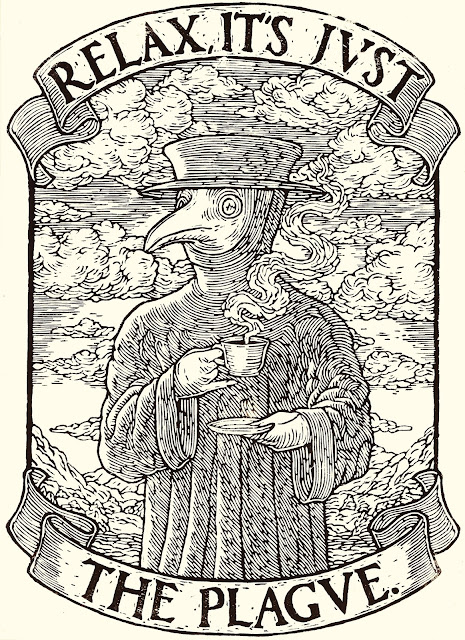 After completing errands before 9am today, I had planned to stay indoors for the next few days at least, but I ventured out just after 2pm once alerted of a prescription being available for pickup.

After the rainy weather of the past couple of days, spring arrived in all of its (quarantined) glory, so by the afternoon the previously deserted streets of Park Slope were once again bustling with life. Most of the people that I saw were merrily wandering about, glad to be out of their homes, hugging too-long-unseen friends and loved ones, but few sported masks or any form of mouth coverings or gloves, save for those entering the supermarket right around the corner. (No mask, no admittance.)

As I walked north along 5th Avenue toward the Chemists Shop (my preferred pharmacy by a landslide), I noted a guy across the street who was decked out from head to toe in a well-worn hasmat suit of the kind you can snag via eBay for around thirteen bucks (excluding shipping and handling). His face was obscured by a mask and he even sported those plastic baggie boots, along with, for some unknown reason, a blue superhero-style cape, rendering his whole look into a sorry cosplay variant of Moon Knight. He ducked into the 24/7 convenience store on one of the corners, but came out again almost immediately, after which he quickly crossed the avenue and ended up on the sidewalk a few lengths ahead of me.

He too headed into the Chemists Shop.

When I entered, I saw him brandishing a sealed box of ventilator masks, and he was attempting to sell them, "cheap," to the too-savvy-for him counter girl and the weekend manager, who is also always on the ball. The mystery wandering medical supply entrepreneur gave it his all, but the staff simply were not having it, outlining to him how they were only stocking and selling 3M brand N95 masks, and noting that what he was attempting to push on them were cheap paper knockoff that were functionally "useless." Realizing he was not dealing with the gullible, he beat a hasty retreat.

When I approached the counter, I engaged the staff in our usual session of friendly "regular" chatter, and allowed them to vent about what had just transpired. Apparently, the guy had been hitting all of the local convenience stores, supermarkets, bodegas, and supermarkets, and word of his scheme had gotten around.

Never underestimate the grapevine of small Brooklyn businesses.
Posted by Bunche (pop culture ronin) at Saturday, May 02, 2020 No comments: 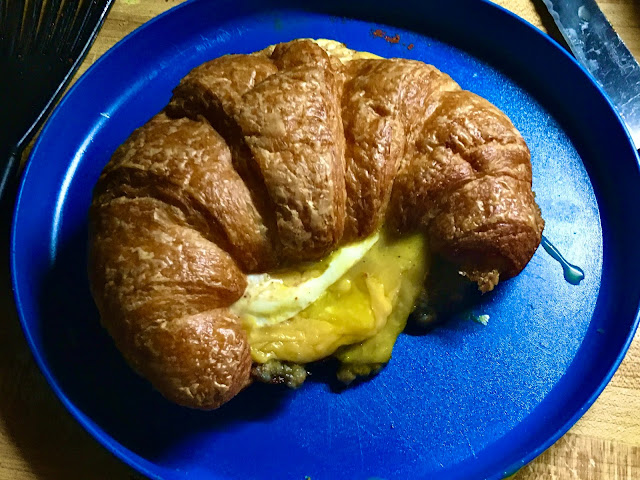 I say that as a reward for making it through the week during the pandemic/quarantine, we all treat ourselves to an obscene weekend breakfast. Today's for me was a sausage, runny over-easy egg, and cheese croissant, with a lashing of cayenne pepper. Utterly delicious and way better than one you'd get at a diner or a Dunkin' Donuts.

The secret is obtaining a large croissant (as you are making a proper sandwich and not a dainty snack) and flattening your sausage patty meat between two sheets of parchment paper, making sure it's flatter and wider than a pancake. Meat shrinks on a griddle, so making the patty super-wide and super-flat compensates for for that and allows the patty to be at a respectable size upon completion of cooking. The area of the sausage surface space also allows for carefully placing your egg and allowing the runny bits room to move but still stay on the sausage (more or less) while the croissant sops up some of the runoff.

Whatever the case, this is a 10 out of a possible 10 on the quality breakfast scale if done properly, and it goes swimmingly with tea.
Posted by Bunche (pop culture ronin) at Saturday, May 02, 2020 No comments: