THE MANDINGO PROJECT-part one: chapters 1-5 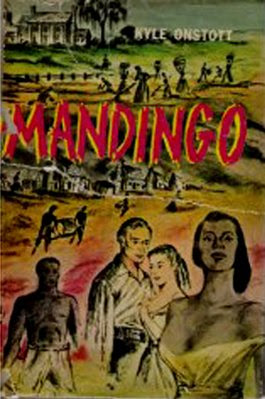 MANDINGO takes place in the antebellum south of 1820 at the Falconhurst slave-breeding plantation, an establishment known throughout the land for turning out blacks of the highest quality for heavy field work or whatever whims the buyer may have (no matter how sick or twisted they may be, as we shall see). The place has definitely seen better days; the ground has petered out thanks to over-farming of cotton, the mansion has fallen into disrepair, and despite the plantation's intended purpose of breeding slaves there are more of them around than the proprietors know what to do with.

The patriarch of Falconhurst is Warren Maxwell, an irascible old fuck who treats his “niggers” as one would a mildly disobedient dog; he seldom has a kind word for them and displays a shockingly superior attitude for one so staggeringly ignorant. Plagued by crippling rheumatism - or “rheumatiz” as he would put it - Maxwell drinks corn whisky-laden hot toddies from the moment he wakes until the moment he retires at night, essentially rendering himself Shane McGowan-level drunk all day long. The one true joy in his life, aside from his toddies, is his only son, Hammond.

Hammond is eighteen years old, and by all measure of “bodice ripper” fiction he is fairly handsome, but is physically flawed with a permanently stiff leg, an injury incurred during childhood after being thrown from the saddle by a stroppy gelding (after that incident Hammond's father grows to loathe geldings of both the equine and human varieties, leading to a plantation policy of never gelding either a horse or slave). Being the heir to the plantation and general administrator since his father is hobbled by his “rheumatiz,” Hammond is pretty much a prince, flush with cash and the master's right to fuck any of the slaves as he sees fit, whether they like it or not, since as his father claims “nigger wench crave her master for her first time.” It is made very clear that Hammond has rampantly impregnated slave girls since he was fourteen, siring many offspring in the process (including one being carried by his two months pregnant bed wench, Dite, which is short for Aphrodite), offspring who are immediately categorized as potential sale items, made all the more valuable since they are “half human.” An unexpected side effect of Hammond's virulent jungle fever is his utter lack of attraction to white women, a very important plot point that sets the main meat of the story into motion in chapter six, but more on that when we get to it.

Anyway, the first five chapters cover a period of roughly twenty-four rain-soaked hours and introduce us to the Maxwells and their staff of house slaves, chief among whom is the requisite fat mammy stock character so common to tales of this ilk, this time dubbed Lucrecia Borgia; in this and subsequent books in what became the Falconhurst series it is clear that Lucrecia Borgia - always referred to by her full name - is the real power behind the Falconhurst hierarchy, and while the Maxwell men may give orders and such, they grudgingly respect and trust Lucrecia Borgia and allow her to handle all of the house matters and much of the concerns that extend beyond the big house. She also displays a cruel enjoyment in watching slaves of lesser rank - which is basically everyone else on the plantation with a trace of melanin - receive corporal punishment, especially when personally meted out with a whip or paddle in her hand with the full approval of her owners. Part of her status stems from her prodigious reproductive capabilities, an Herculean fecundity that yielded at least ten sets of twins, but when the story begins she is described as “pretty much bred out.”

Also of note are Alpha and Omega (Alph and Meg for short), the youngest of Lucrecia Borgia's brood, tweener scalliwags engaged in a fierce war for the attentions of their respective masters; Alph is forced into spending much of his time with the elder Maxwell's feet pressed against his belly in an ill-informed attempt to drain the rheumatism from the old man into the young boy, while Meg obsequiously sets out to fulfill Hammond's every minute whim or need out of an apparently homosexual/masochistic love for his master, even to the point of demanding regular beatings from Hammond that he interprets as proving his master's love, beatings from which he derives an obviously sexual pleasure.

The other important Falconhurst slave is Agamemnon (Mem for short), the thirty-something houseboy who is the object of constant abuse from everyone around him, slave or otherwise; Mem is the classic lazy nigger who only shapes up when threatened with physical punishment for his sloth, and while having no choice but to put up with his station, he is the only slave to flat out realize that his situation simply sucks ass. Upon being caught stealing whisky after a number of other minor infractions, Mem is sentenced to be hung up and given thirty lashes, a sentence that is delayed after Hammond sadistically administers a near-fatal dose of syrup of ipecac as an extra bit of punishment intended to heighten Mem's pre-whipping misery. Hammond realizes his vindictiveness nearly cost Mem his life, but he has no idea that that act has sown the seeds of impending tragedy…

During the aforementioned twenty-four hour period, the Maxwells play grudging hosts to Brownlee, an ignorant and ultra-sleazy slave trader (with whom the elder Maxwell makes an exchange of two slaves from Falconhurst for two so-so specimens of Brownlee's and a little cash to make up for the difference in quality), and the three men “treat” readers to in-depth discussions of the intricacies of the flesh trade, their philosophies on slavery and other subjects, along with their twisted medical “knowledge” in regard to the veterinary care of niggers.

The plantation's prize wench, a girl of pure Mandingo blood named Big Pearl because of her sturdy and statuesque build (who is the intentionally inbred offspring of her grandfather and his daughter), appears to be ailing, so a slave is sent out to fetch Doc Redfield, the local veterinarian. Upon arrival, Redford diagnoses Big Pearl as being “hipped,” in other words she's in heat and craves for Hammond to fuck her. Hearing this, Hammond admits to being intimidated by her size and the fact that she, like all niggers we are told, is “powerful musky.” Working with a suggestion provided by Brownlee, it is decreed that Big Pearl will be bathed in a strong solution that “renders niggers right sweet smellin' for two, three days,” and Hammond will soon come over and do his masterly duty. After the men return to the house for yet more booze and overblown prose, Brownlee drunkenly requests a bed wench from Mem, but when Mem wisely doesn't supply a wench without the permission of his masters Brownlee sneaks out to Big Pearl's cabin with every intention of taking her virginity for himself. Her irate mother, Lucy, alerts the Maxwells to Brownlee's sniffing about before anything can happen, and Brownlee is unceremoniously asked to leave Falconhurst. END OF CHAPTER FIVE.

While all of this gives us a very clear and thorough insight into the mindset of white male participants in the slavery system, it also points out the fact that the writer really needed an editor since this stuff takes up five dense chapters, made all the harder to wade through because the reader has to get used to deciphering the southern colloquialisms, slang and general bad grammar issuing from the characters' mouths.

The ignorance of the whites is really incredible to read, but one must take into account the fact that in the early 1800s in rural areas such as that depicted here people pretty much had contact only with their families and those encountered during excursions for provisions due to how far away everyone was from one another; your nearest neighbor was about eight to ten miles away if you were lucky.

The majority of the Falconhurst slaves have names derived from classical mythology, famous historical figures or biblical characters in an attempt for the Maxwells to show off how cultured they are(n't) by coming up with such high-falutin' and pretentious monikers. Yeah, way to go with "Lucrecia Borgia," dude!

With the exception of Agamemnon, all of the slaves at Falconhurst worship the Maxwells, especially Hammond, as devotionally as the ancient Greeks revered the occupants of Mount Olympus, cheerfully reveling in the squalor of their lives and happily acquiescing to Hammond's priapic needs. These are the NC-17 versions of the kind of slaves who populated such works as GONE WITH THE WIND, and each and every one of them makes me sick. They have accepted their status as little more than pets or objects and not one of them are in the least bit sympathetic. They are there to solely to take it up the ass from life with little or no complaint, both figuratively and literally.

Particularly offensive are Alph and Meg; horrid little turds to begin with, they swiftly mutate into the worst kind of toadies, especially Meg, whose inner monologue on the magnificence of Hammond and his desire to love him in all ways reeks of NAMBLA fantasies from the late 1950's. The kid demands that Hammond beat him to show the world that he is “Masta Hammond's nigger, an' no one else'ns,” for fuck's sake!!! And don't get me started on Alph, pressganged into being a “rheumatiz” sponge after the elder Maxwell hears from Brownlee about “nekkid Mexican dogs” who can drain off joint pains if you apply your feet to their bellies as often as possible; the image of James Mason doing this to a little black boy in the film has gone on to well deserved cinematic infamy and is so outrageous/hilarious that you won't know what to think when you actually see it.

One final note of importance is Doc Redfield's mention of his use of a painless poison to end the lives of slaves who are too old to work or be of value anymore, an illegal practice, but the poison is untraceable. This bit of information will become of major importance during the novel's last act…

NEXT: Hammond searches for a wife, goes shopping, finds true love in an unexpected place, and returns home with the black version of Superman.
Posted by Bunche (pop culture ronin) at Thursday, February 17, 2005

Wow! This sounds way more bizarre and fucktup than the movie. I do remember liking the movie though.

Hi Steve. Glad to see you've still got an interest in 70's era slave-sploitation. I was cleaning out my apartment and I found a zine-esque thing you put together about Marvel Comics "Gunhawks". (Slave becomes confederate soldier, then wild west gunfighter, etc.) I saved it from when I was Mike Lackey's intern back in 1994. Glad to see you're still alive and kickin'. (by the way, in the zine thingy, you drew yourself wearing a "G.G. Lives t-shirt.) -Herb. hsa333@yahoo.com

Dear Gods -- Bunche, are you sure you're not my brother? I read MANDINGO when I was about eight or nine; my father had the whole series of books. Warped me for life, I swear.