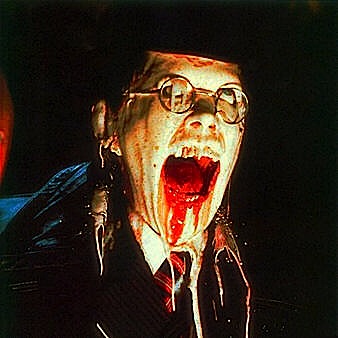 Here's another story from the barbecue joint trenches, and it sure as fuck ain't pretty.

On Friday night, "Cotton Ear," one of the joint's rotating cast of worthless douchebags came back in and asked to use the bathroom. The woman in question is the wife of "The Troll," some idiot who tried during the early days of the joint to become our live entertainment as a guitarist while trying to pass his wife off as a singer (who purportedly had a brief career crooning at vaious rest stops along the New Jersey Turnpike; no, seriously). My boss gave the guy the nay-no but he persistently tried to weasel his way in, ultimately to no avail.

This couple is hard to get across to the casual reader because they are a true horror that must be personally witnessed in order to be understood. They are obviously junkies, never sober, are redolent of who-knows-what, and worst of all they have a beautiful infant daughter whom I am convinced was kidnapped. The vaginally-equipped portion of the pair even came in one night and asked me if we threw out food each day and if we'd give it to her and her verminous mate.

Anyway, on Friday night Bride of Troll came in and asked our bartender if she could once again use our bathroom. After her lavoratorial visit, she promptly left and vanished into the night. Then our waitress attempted to use the facilities and recoiled as if avoiding the strike of King Cobra. "FUCK!" she cried, "It smells like the homeless!!!" Being the only staffer on duty at that time who was able to deal with the situation since the kitchen was closed and the bartender was otherwise engaged, your humble narrator girded his loins and opened the Ladies' Room door.

There are those who say that people who witness Cthulhu and other Lovecraftian horrors that man was not meant to experience go mad at the first exposure to such sheer, otherworldly evil, and I am here to say that I nearly gave up the last vestiges of my sanity upon crossing that threshold. I reeled as though physically assaulted by the horrific stench and, staggered though I was, I somehow managed to wobble into the kitchen and dig out the appropriate tools for handling such an olfactory Chernobyl, namely several rough bar rags and a surfeit of bleach in a spray bottle. With the theme from GHOSTBUSTERS playing in my head, I disconnected all emotion and got down to business. After pulling my shirt up over my nose and mouth to form a makeshift air filter, I entered the now-violated privy and sprayed bleach willy-nilly into the air, all while casting a critical eye over the entire room. The fetid miasma that cursed the atmosphere was without question the most powerful yeast infection waft in the history of pussy, and compounding that was the horror of that vile woman having somehow left her steaming, drippy feces on both sides of the toilet seat.

I had to clean that, folks.

After handling that douche-chill-inducing spectacle I hit every surface in the restroom with bleach and called in a friend of the bar who happens to be a seriously experienced nurse to verify that it was safe for women to use. Once I was given the all-clear I retired to the bar and sucked down shot after shot of tequila in an attempt to soothe my shattered nerves. The next day I explained all of this to my boss — minus the screaming and cursing that occurred once I was out of that vortex of pestilence — and stated flatly that the musical goon and his plague-disseminating spouse be permanently banned from ever setting foot in the joint ever again, a decision made by all of the staff in attendance that night, especially since they only ever come in to drop their toxic waste and never spend a fucking cent on anything.

My boss — who is already rather pallid, being the spawn of Russian-American coal miners from Pennsylvania — visibly turned chalk white upon hearing of my ordeal and flatly approved the 86ing of the two offenders. I can't wait to tell them that they are no longer welcome...
Posted by Bunche (pop culture ronin) at Tuesday, November 08, 2005

There is no worse job than being in the food industry. The horrors you're forced to face both with customers and behind the scenes can fill volumes. I'd say you handled it very well, and you're a better man than I. I wouldv'e nailed the door shut and condemned it.

Oh. Here's my review of your joint:
http://baxojayz.blogspot.com/2005/11/brooklyn-bar-bq-or-when-i-got-to-meet.html#links

Mother of gods... That's just boyond words and beyond decency.

I do not envy you your job.

I nearly puked, reading that.

A year later and I can still smell the stench and your disgust. Without naming names, I am a distant neighbor who had the unfortunate meeting with the lovely female (and she and her boyfriend and be quite nice when sober, though ALWAYS stinking!) at my door looking for money for her kid. After a polite NO (being new to the nabe), I could not get her smell out of my nose, mouth, and general sensory perception for DAYS. No booze, perfume or different fetid smell could wash it away.

And at the end of the day folks, it's all about a good old soap scrub for that family...

Might have been safer to burn it down and start over.