DAY OFF ADVENTURES: DE-EVOLUTION IN TOYLAND

During my weekly trip into Manhattan I stopped by the current location of the once mighty Forbidden Planet, a comics/sci-fi/general geekery emporium, in search of a comic book that I have been having difficulty getting my hands on. Sadly, the Planet was the third store I went to that didn't have what I was after, so I was about to leave when I decided to check out the new collectible toys that infested the shelves. A plethora of Japanese monsters, superheroes, giant robots and STAR WARS characters assaulted my eyes and for the most part didn't catch my interest, so I made a beeline for the door. Suddenly, I stopped in my tracks, my attention riveted by a sight glimpsed peripherally. There, all by its lonesome on a shelf, partially wedged behind a toy from the upcoming Superman flick, was a beautifully sculpted Devo figure.

Yes, you read that right. An honest to God, motherfucking Devo figure! 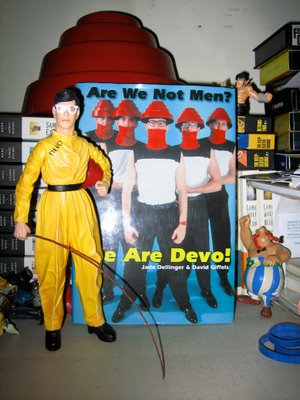 My love of most things Devo is well-documented so I won't go into that again, but when I saw that toy the first thing to come out of my mouth was, "No WAY am I leaving this place without you." I grabbed the doll, plunked down the cash and headed home.

Now, I thought it was nuts about ten years ago when the Ozzy Osbourne figure came out, but the existence of a Devo toy just goes to show that if you wait long enough someone will manufacture a replica of just about anyone.

The figure is ostensibly of Mark Mothersbaugh, bespectacled frontman of the group, but it also comes with replaceable heads for the other four members of the original lineup — the likenesses are merely so-so — but since Mark is inarguably the face that most people associate with Devo, his head is definitely the one to go with. 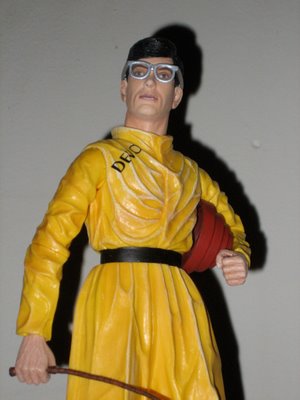 And adding to the kitsch value, the manufacturers kindly provide a bullwhip and one of those red flower pot helmets — and "energy dome" to those in the know — as accessories.

The figure stands about nine inches in height, and the bright yellow of the jumpsuit makes it eyecatching no matter where you have it on display. I'll be putting mine on display next to the Ultraman toy that I have adorning the sill of the kitchen at the barbecue joint. Now all I need is an equally well-made GG Allin doll...
Posted by Bunche (pop culture ronin) at Tuesday, May 30, 2006

Now you have me wondering who would win in an Asterix vs. Devo fight.

I want one so that he can go out with my Barbie. But I think Barbie should have a Devo uniform too.


Here's a good overheard phrase for you:

I try to sneak it into convos all the time.

The gg allyn doll would certainly include the wetting and excretion functions of other dolls (razor blades not included).