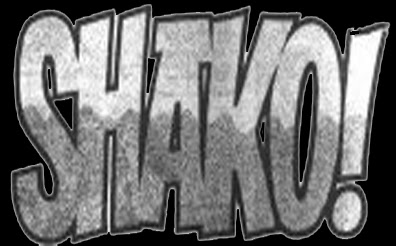 "Shako! The Eskimo word for the Great White Bear. It means simply...KILLER!"

Thus opened the 1977 serial SHAKO, a sixteen chapter, virtually plotless excuse to depict a Polar bear biting people's heads off, and I'll be damned if it wasn't funny as hell.

Running in the first year of Britain's legendary weekly sci-fi anthology comic 2000 AD, SHAKO was unique since its sci-fi hook was tenuous at best — the bear had swallowed a container of a deadly germ warfare culture and had to be hunted down by the CIA — especially when weighed against the other serials that populated the magazine's pages, most notably the nascent JUDGE DREDD.

2000 AD came hot on the heels of the cancelled ACTION, another weekly mag that catered to bloodthirsty young boys, each strip filled with wall-to-wall carnage and graphic violence, factors that made it the target of UK parental outrage, and no strip in the book was more notorious than the flagrant JAWS ripoff, HOOKJAW (note the imaginative title). 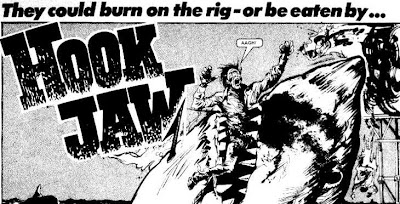 The series was nothing more than a body count on the high seas, and the plot histrionics appealed to its laddish audience not merely thanks to its outrageous level of gory mayhem, but also because it read like a strip a ten-year-old could have written, and therein lay the balls-out fun. But all good things must end or get cancelled by a bunch of parental pussies, so HOOKJAW went to the Davy Jones's locker of comicdom, and was resuscitated with an ursine stand-in for the shark in 2000 AD #20-35.

I first discovered Two-Thou (as us fans/geeks affectionately call it) during a trip to England in the summer of 1981 and have been hooked ever since, and in '86 an abridged version of SHAKO was printed in that year's 2000 AD annual. I was in my third year of college when I picked it up, and one of my fondest memories of introducing my friends to comics has to be seeing my pal John Gibson convulsed with laughter as he read the bear's murderous rampage, occasionally stopping to giggle and exclaim, "Shako!!!" in his best movie trailer narrator's voice.

No joke, the growing body of the story has no purpose other than to depict a startlingly intelligent polar bear staying one step ahead of his pursuers, sadistically setting traps for them, chomping on their heads like candy, and just generally being a big, white menace. 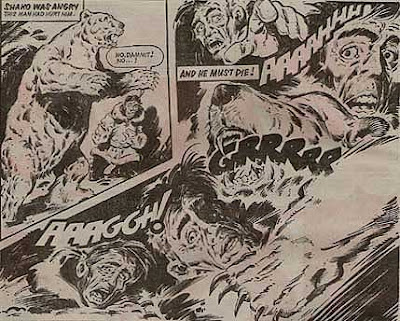 Among the many laugh-out-loud highlights, the two funniest bits have to be the one where a guy is in the shower and, soap in his eyes, gropes about to find what he thinks is a fluffy white towel, and the one where a Russian whaler named Sergei actually gets into a fist fight with Shako because he wants to fight an American (???) and shouts, "A left to the fish basket, Yankee!" as he punches the bear in the gut shortly before Shako tears him a new one. Chapter after chapter goes by, each topping the previous for ludicrous action, only to culminate with CIA man Buck Dollar blowing the shit out of Shako with a bazooka, only to die when the bear's carcass falls on him. What's not to love?

Remembered these days only by Two-Thou diehards, SHAKO has become a cult favorite for all of the previously stated reasons, and the entire serial was recently reprinted in 2000 AD EXTREME EDITION #18 (Oct. 31, 2006), the magazine that re-presents the harder-to-find offerings from Two-Thou's bygone days. When I saw the bear's face on the cover, I let out a yelp of surprise and delight, scooped it up and bought the motherfucker, reading it on the subway and laughing like a madman. 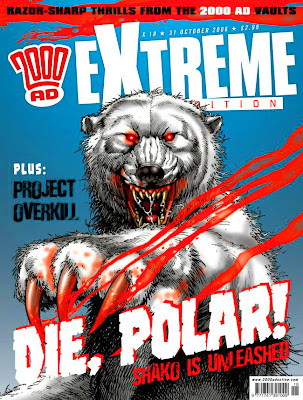 And in a true testament to SHAKO's cult status, there's even a T-shirt available, featuring bloody claw marks and the bear biting a guy's head off, emblazoned with the slogan,"Shako! The Only Bear on the C.I.A. Death List!" 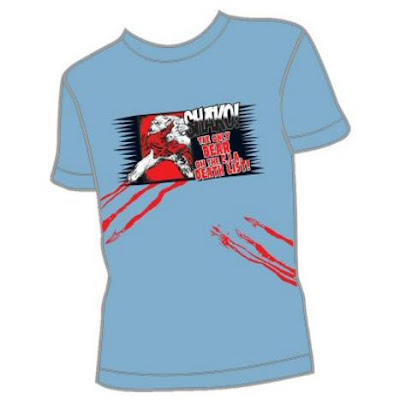 My kind of merchandising tie-in! Trust yer Bunche and read the motherfucker, already! It'd make for an hilarious film adaptation, especially with buckets of spewing red paint, and the title character played by a really bad animatronic, the less realistic, the better.
Posted by Bunche (pop culture ronin) at Monday, January 15, 2007

Shako certainly is dainbread, but he's still no Ace The Bat Hound!!!

This feels like a piece of the "Lost" puzzle to me. Bunche, you've got to watch at least Season 1 and see what you think.

Frightening. Haven't lived in england since 1980, but had everyone of the first three years of 2000 AD delivered weekly.

As a kid, I always thought the campy narrating style was intended to show you the story "through Shako's eyes" but it really was ludicrous, and every week you'd find yourself cursing the stupidity of his hunters.

I actually remember that towel bit!

2000 AD had the best stories back then. Invasion!; Harlem Heroes; Dredd; Mach 1 (that and Harlem Heroes/Inferno had the saddest endings for comics for the era.)