As I conduct a one-man tequila-soaked wake for Lux Interior, my mourning is accompanied by the Cramps' A DATE WITH ELVIS, my favorite of their albums, and it reminded me of this article I wrote a couple of years back. This is the perfect layman's guide to the Cramps' musical catalog, so use it well.

After my spiritual revivification at the Cramps show last week, I have launched into a near nonstop aural diet of the group’s albums, recordings that I have devoured both on vinyl and CD for over twenty-five years, and I never get sick of them. However, despite my fervent adoration of the Cramps I am aware that their peculiar brand of lysergic swampbilly is a bit of an acquired taste for some listeners, so this post is here for the novice, a guide to over a dozen albums and pointers on the best tunes that each has to offer. So let us begin, shall we? 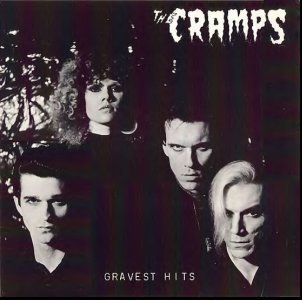 Short and sweet, GRAVEST HITS is the perfect introduction to the band with “Human Fly” immediately setting the edgy, psychotronic tone. The remainder of the album consists of covers but the intent is highly infectious and there’s not a dud in the bunch. All of these tracks turn up again on subsequent releases — get used to some serious track redundancy from here on out — and this album has been paired with PSYCHEDELIC JUNGLE on CD, so go straight for that if you want to pick up GRAVEST HITS. The only thing that saddens me about the CD being repackaged is that they put GRAVEST HITS on as the second half of the CD, thereby killing the discovery of a “new,” sinister sound. But that’s not to say that PSYCHEDELIC JUNGLE lacks merit, but I’ll get to that later. 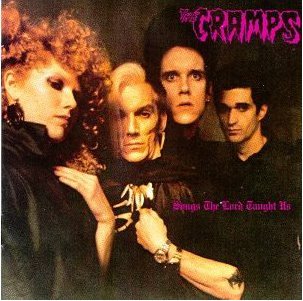 This first full length LP gets off to a great start with the classic “TV Set,” a seriously rockin’ ditty about a guy who has dismembered his girlfriend and put her components to interesting uses around the house, but the rest of album is a bit of a mixed bag. The indisputable gems on this one include “I Was A Teenage Werewolf,” “Garbageman,” “The Mad Daddy,” “Mystery Plane,” “Zombie Dance,” and inspired covers of “Strychnine,” “Tear It Up,” and “Fever,” the last one being the only version of that oft-covered chestnut that I can listen to anymore. With the exception of “Twist And Shout” (an original composition by Lux and Ivy, not a cover of the Isley Brothers classic), the CD extras are nothing to write home about, so check them out only if you are the most rabid of diehards. 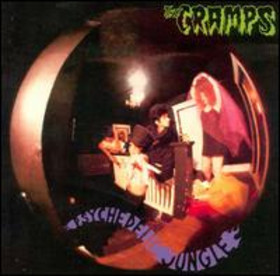 Paired as the lead-in to GRAVEST HITS on CD, PSYCHEDELIC JUNGLE is strong meat indeed and it would take the band five years to come up with another full-length work, let alone one as good as this. The two weakest tracks, “Voodoo Idol” and a forgettable cover of “Green Door,” can be skipped over and considered no great loss, but the rest of the album is a prime example of a band really finding its voice, most memorably in the bizarre “Don’t Eat Stuff Off The Sidewalk” and the last song I would ever want to hear if I’d been slipped some bad acid, “Beautiful Gardens.” A clear winner and definitely one of the Cramps’ best efforts. 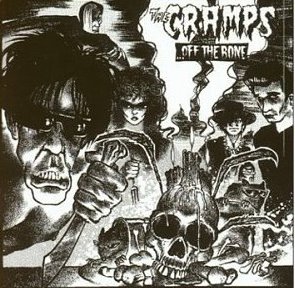 Eight of the tracks found here have been recycled from earlier releases, rendering this disc pretty much disposable if not for the inclusion of the exceptional “New Kind Of Kick,” and while the other new tunes are okay, this album is basically a ripoff. 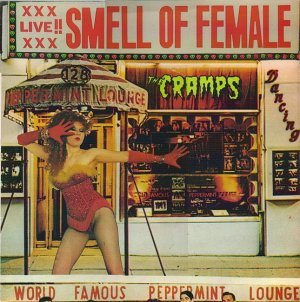 Too short for its own good on vinyl and extended with two more live tracks and a single recorded for the film RETURN OF THE LIVING DEAD for the CD release, this is a fun live set recorded at NYC’s legendary Peppermint Lounge (former home of Joey Dee and the Starlighters, the guys who gave the world “The Peppermint Twist” back in the early 1960’s). The sound is great and the audience enthusiasm is clearly present, but the energy found at a live Cramps performance is oddly absent. Such, however, is not the case on the mind-boggling live rendition of “Tear It Up” found in the film URGH! A MUSIC WAR, which exists on the double-LP soundtrack, and the hard to find CD release of the same. It’s worth tracking down not just for the Cramps; the album features fantastic live cuts by Devo, the Go-Go’s, Wall of Voodoo, and many other bands just before they scored big league success. 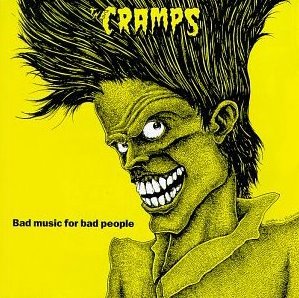 Yet another festival of repackaging, this is at least more consistent in rockin’ content than OFF THE BONE and works well as a party album (if you can get away with putting this kind of stuff on a party, that is). 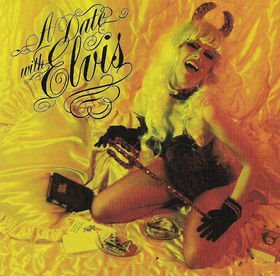 Tracks:
How Far Can Too Far Go?
The Hot Pearl Snatch
People Ain’t No Good
What’s Inside A Girl?
Can Your Pussy Do The Dog?
Kizmiaz
Cornfed Dames
Chicken
(Hot Pool Of ) Womanneed
Aloha From Hell
It’s Just That Song

Hands down, this one gets my vote as The Cramps’ finest hour. Flagrantly raunchy and sex obsessed, this is a mid-Eighties distillation of exactly what scared the shit out of parents in the Fifties when “race music” first reared its ugly head and just might corrupt Biff and Princess. Taking a break from their more psychotronic and creepy leanings and opening appropriately by asking the musical question “How Far Can Too Far Go?,” the album goes on to answer that query in a balls-out, knock down, drag out and frequently hilarious tour de force that stood little chance of getting any commercial airplay. Firing on all cylinders, everything clicks perfectly this time around; the lyrics, Lux’s rockabilly hiccup delivery, Ivy putting her all into the guitar work in a way that only a woman who’s in on the smutty joke could, thereby rendering it that much dirtier (and better), all of which is served up with tongue firmly in cheek. There are those who champion PSYCHEDELIC JUNGLE for its early purity, but in my opinion if you choose to buy only one Cramps album, I say go with this one. You will NOT be disappointed. 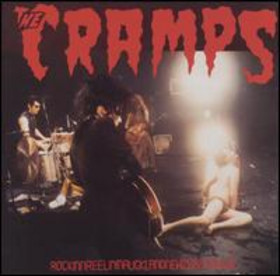 Tracks:
The Hot Pearl Snatch
People Ain’t No Good
What’s Inside A Girl?
Cornfed Dames
Sunglasses After dark
Heartbreak Hotel
Chicken
Do The Clam
Aloha From Hell
Can Your Pussy Do The Dog?
Birdfeed
CD Extras:
Lonesome Town

Adding three tracks on the CD to supplement the LP material, this recording from Down Under is by far the better of the two Cramps live albums. Mostly featuring songs from A DATE WITH ELVIS (so you can’t go wrong), this is a lot of fun and definitely a keeper. 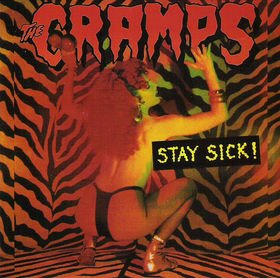 Tracks:
Bop Pills
God Damn Rock ‘N’ Roll
Bikini Girls With Machine Guns
All Women Are Bad
The Creature From The Black Leather Lagoon
Shortnin’ Bread
Daisys Up Your Butterfly
Everything Goes
Journey To The Centre Of A Girl
Mama Oo Pow Pow
Saddle Up A Buzz Buzz
Muleskinner Blues
Her Love Rubbed Off
Her Love Rubbed Off (live)
Bikini Girls With Machine Guns (live)

Sounding slicker than ever (and for this band I don’t think that’s necessarily a good thing), STAY SICK! is not without its moments — the highlights being “God Damn Rock ‘N’ Roll,” “Bikini Girls With Machine Guns,” “All Women Are Bad,” and “The Creature From The Black Leather Lagoon” — but the bulk of this release is simply mediocre. Apparently, A DATE WITH ELVIS was a tough act to follow. Oh, and try to track down the 12-inch single of “Bikini Girls With Machine Guns” for the superb and frameable movie poster-sized foldout of a howling Poison Ivy as one of the title characters. 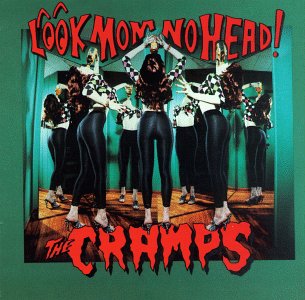 Tracks:
Dames, Booze, Chains And Boots
Two Headed Sex Change
Blow Up Your Mind
Hardworkin' Man
Miniskirt Blues
Alligator Stomp
I Wanna Get In Your Pants
Bend Over, I'll Drive
Don't Get Funny With Me
Eyeball In My Martini
Hipsville 29 B.C.
The Strangeness In Me
Wilder Wilder Faster Faster
Jelly Roll Rock 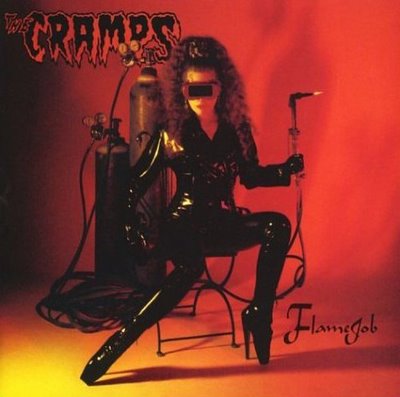 Tracks:
Mean Machine
Ultra Twist
Let’s Get F*cked Up
Nest Of The Cuckoo Bird
I’m Customized
Sado County Auto Show
Naked Girl Falling Down The Stairs
How Come You Do Me?
Inside Out And Upside Down (With You)
Trapped Love
Swing The Big Eyed Rabbit
Strange Love
Blues Blues Blues
Sinners
Route 66 (Get Your Kicks On)

Slightly better than the previous disc, FLAMEJOB tones down the overproduction and returns to the crunchy tones that worked for them in the first place, but by this point it’s pretty plain to see that the band continues to tread water. Sure there are highlights like the excellent “Sado County Auto Show” and “Naked Girl Falling Down The Stairs” (a strange tribute to Marcel Duchamps), but it’s still just more of the same. 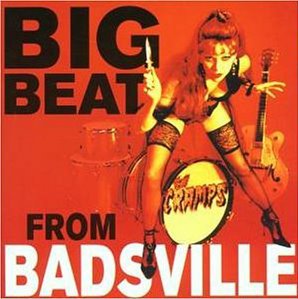 Bouncing back from the previous album, BIG BEAT delivers a lot more than expected, with much of the album rockin’ out hard. “God Monster,” “Like A Bad Girl Should,” “Devil Behind That Bush,” and especially “Haulass Hyena” make this one worth checking out. Not a return to glories past, but a decent listen nonetheless. 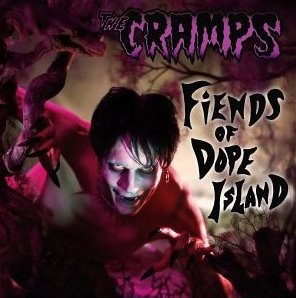 Considering how long in the tooth they are, I’d place a solid bet on this turning out to be the Cramps’ swan song, and as such it’s a surprisingly solid coda. Still romping through familiar territory, the Cramps perform here like grandpa with a fresh refill on his Viagra prescription, stirring life back into a once-vital rock ‘n’ roll Johnson and embarking on one last trip to the whorehouse. This one plays like the consistently-conceived whole that it is, making it the first release since A DATE WITH ELVIS that can be listened to without skipping any of the tracks. It’s all pretty good, but I have to give special props to “Big Black Witchcraft Rock,” and the charmingly offensive/ridiculous “Elvis F**king Christ.” 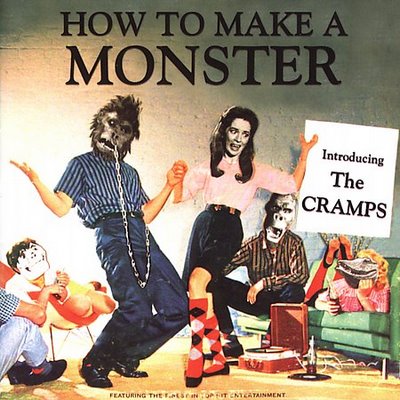 Definitely lending credence to my theory that their studio days are most likely over, this two-disc outing is a massive compilation of rare tracks, demos, live stuff, and just about anything else that could be exhumed, and is recommended for hardcore fans only, and perhaps not even then. At this point in their career a “best of” collection would seem to be in order, but having already repackaged much of their early output far too many times to get away with it yet again, a rummage sale of an album such as this may have been the only viable option. Of wildly varying quality and questionable necessity, the only saving grace of this album is an indispensable book chronicling the band’s history as told by Lux and Ivy themselves.

So there you have it, an unbiased-as-possible look at one band’s discography from a fan who has proven to be as diehard as the group itself, so take my recommendations if you feel so inclined. If not, then crawl face down into the nearest swamp and die, making sure your ass is above water so a rockabilly zombie can drop by for a cold one.
Posted by Bunche (pop culture ronin) at Wednesday, February 04, 2009